Wizkids is bringing everyone’s favorite force of comic book destruction, , to Marvel Heroclix in time for the holidays. The new series will include 51 different figures in this set of blind boosters. Fast Forces 6-Packs will come with six figures, a map, and dice. We should see this new addition on store shelves in December.

The Hulk smashes into the HeroClix arena in a big way! Featuring your beloved Green Goliath and his arch rivals Abomination and The Leader as well as sub-themes from Planet Hulk, World War Hulks, Fall of the Hulks, and the New Fantastic Four, this 51 figure set features the “Enhanced Alter Ego” mechanics, which includes the new Reverse Alter-Ego and the continuation of the ‘In Pack, Buy it By the Brick Figure’ (AIMarine Red Hulk). 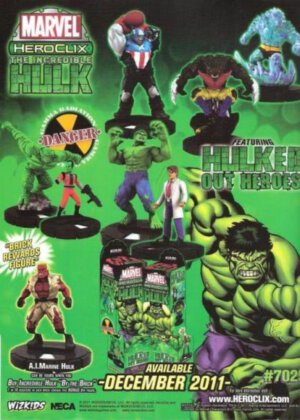