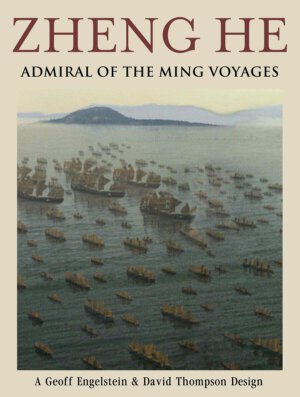 Now up for preorder on the GMT Games P500 list is Zheng He: Admiral of the Ming Voyages. The solitaire game places the player in the role of the famed Chinese admiral as he leads voyages of the treasure fleet. The game is for ages 14+, plays in 30 minutes or more per voyage with a campaign length around 5 hours, and can be preordered for $48.00 with an eventual MSRP of $69.00.

Zheng He: Admiral of the Ming Voyages is a solitaire game that recreates the voyages of the Ming treasure fleets in the early 1400s. In the game you take the role of Zheng He, commanding the fleet as it sails the Indian Ocean, earning glory for the emperor, and keeping favor with the ministers of the court so the voyages can continue. Your goal is to score as many Victory Points as possible until the political will to continue the voyages runs out. Victory Points are earned by visiting ports, gaining envoys, winning battles, and completing special goals. You also earn Minister Points during each voyage by trading and having good relations with ports, which determine whether the game continues with another voyage, and also allow you to upgrade and repair the fleet, and recruit and train officers.

Zheng He is played over a series of voyages, called a campaign. Each voyage consists of three phases: Preparation, Voyage, and Aftermath. In the Preparation phase, you determine the goal for the voyage and set up your fleet. The Voyage phase is the bulk of the game, wherein your fleet travels across the map, performing actions to earn Victory Points and Minister Points. In the Aftermath phase, Minister Points are calculated and you check to make sure you have enough support from the ministers to continue to your next voyage. You also spend Minister Points to upgrade your fleet. Victory Points determine how favorably the emperor views your voyage.

By managing your fleet effectively through the use of your fleet cards, combined with special leaders that you can add over the course of the campaign, you can accomplish special goals, win battles against pirates, take on envoys, build bases, trade goods and more. Through these accomplishments, you will gain Victory Points to earn the emperor’s favor and garner enough Minster Points to appease the ministers and earn the chance to attempt another voyage.

Rebellion: Britannia is Up on the GMT Games P500