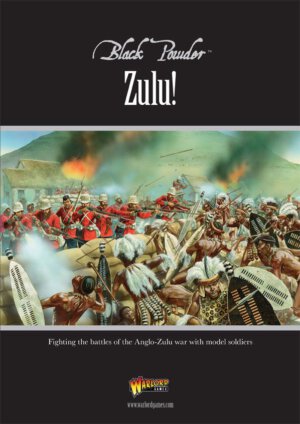 Warlord Games has the newest supplement for their Black Powder miniatures rules and this time around the period tackled is the Anglo-Zulu Wars of the late 1870s. Zulu! consists of 92 pages packed with info and images and can be ordered for £20.00.

You’ve seen the silver screen version of events in Zulu and Zulu Dawn – now you can refight these classic engagements on the tabletop… as Warlord Games is taking preorders for the Zulu supplement for their Black Powder miniatures rules.

This lavish 92 page supplement provides historical background as well as character profiles and rules for recreating the key engagements of the war, including the Isandlwana, Ulundi and Rorke’s Drift, as well as other less well known conflicts. Of course it is also packed with images of these battles recreated on the table-top, as well as photos of the region and battlefields as they appear now.

The book will be out early December and will come with a free, exclusive miniature of Prince Louis Napoleon (which can also be assembled as a dashing British officer).

Warlord Games will be donating £1 from every book sold to the David Rattray Memorial Trust, a charity dedicated to the building and upkeep of Zulu schools local to the Rorke’s Drift area.

We have a tremendous range of miniatures and terrain for fighting out Anglo-Zulu battles, from the awesome Rorke’s Drift and Horns of the Buffalo battle sets, starter armies for the British and Zulus, multi-part plastic boxed sets, and brilliantly characterful metal figures including historical and Hollywood versions of the key protagonists.