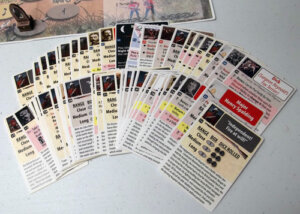 Coming just in time for the holiday gift giving season will be a new Gold Banner Edition of Zulus on the Ramparts from Victory Point Games, along with an app version of the same game.

Alan Emrich stated “We’re busy working on not one but TWO new editions of ZULUS ON THE RAMPARTS. The first is a app game version (initial release for the iPad, but we’ll get to the other app game platforms) and it’s looking pretty spiffy already. Stephanie Newland is leading the programming, and we’re applying a lot of lessons learned from our resent LEVEE EN MASSE app game.

The second version is a new Gold Banner second edition of the game, which I am developing. It will have 50 full-size cards and include the expansion kit (plus some new material), plus our uber-thick laser-cut counters. I’m experimenting with the counters right now making many of them “standees,” and we’ll be playtesting with those new pieces over Labor Day weekend and making sure the ergonomics work.

Both games will feature new illustrations by Clark Miller, and the boardgame will have a new map from Tim Allen. You should have these games in time for your holiday spear-it, you can bet your assegai.”

Alan goes on to say that the picture above is just the alpha version, but the game will have full sized cards, less film info and more historical info, plus you can just make out one of the new “Standees” in the top left corner.

We’ll keep you updated on more info on the new Zulus as it becomes available.