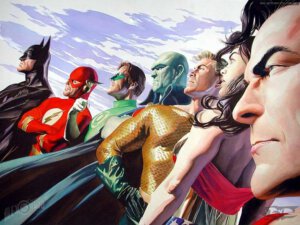 While Warner Bros may not have released the sheer number of DC Comics related films as rival Marvel over the past few years, the Dark Knight franchise and reboot of Superman were certainly high quality, entertaining and crowd pleasing endeavors. Now Warners is taking aim at Marvel’s movie crown with the announcement of ten confirmed films (along with others still in early development) set for release through 2020.

2016: Batman vs Superman: Dawn of Justice (Zack Snyder at the helm) featuring the introduction of Ben Affleck as Batman and Gale Gardot as Women Woman with Henry Cavill returning as the Man of Steel and Amy Adams as Lois Lane; Suicide Squad (directed by David Ayer) as Warner’s answer to the ragtag misfits of Marvel’s Guardians of the Galaxy.

2017: Wonder Woman (with Gardot obviously in the lead role); and Justice League – or Justice League Part One as some sites are referring to the film (Zack Snyder assigned to direct).

Along with the aforementioned films Warners will also release stand alone Batman and Superman movies in the above time frame as well.

As someone with no real allegiance to either of the Big Two (I’ll read anything from Abstract Studios through Zenescope Entertainment, as long as it’s good) I’m happy to see the DC universe getting much stronger play in the film world as they’ve got lots of properties screaming to hit the big screen.