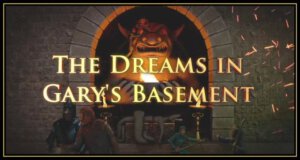 I don’t necessarily post much news about film crowdfunding projects but there is one which ends today, for Dorks of Yore, that I’m certainly interested in seeing completed. The Dreams in Gary’s Basement: A Documentary on Gary Gygax obviously enough from it’s title, tells the story of the Dungeons & Dragons co-creator. I happen to fall into the camp who liked/likes Gygax so I’d be mighty interested in seeing this new take on the development of the famed RPG as well as Gygax during the TSR years. The project is nearly 400% funded and only has a few hours to go at about $1500.00 shy of its final stretch goal. You can pledge your support starting at $20.00 to receive a digital download of the doc or a $50.00 pledge for the Blu-Ray with extras. Expected delivery is April of next year.

Gary Gygax was one of the great minds of the 20th century – his innovations have influenced generations of artists and spawned tens of billions of dollars in global revenue. With Dungeons & Dragons, Gary crafted a vehicle for engaging the mind at a creative, analytical, social and even emotional level – all at the same time. There is truly nothing else like it.

Gary’s work has woven itself into the fabric of our culture, yet there is no monument to recognize him, not even in his own hometown. We intend this project to be a filmic monument of sorts – a high-quality, emotionally engaging record of Gary’s story that can be appreciated by gamers and non-gamers alike for generations to come.

As a lifelong player of D&D, I feel this project has been a dream come true. I’ve met so many of my idols, made so many friends, and developed a deeper understanding of Gary Gygax and his magical game.

This movie has been three years in the making and is now just months from being completed. We have dozens of interviews and hours of other great footage, and in a rough cut, it already tells a compelling story.

With your support, we can bring it across the finish line by giving the movie high-end color grading, sound mixing and additional archival photos and video. We have a talented post-production team in place and ready to work as soon as we fund. Please help us bring Gary’s inspiring story to life and create a lasting addition to his legacy. – Pat Kilbane, Director

Tags
Dorks of Yore Kickstarter The Dreams is Gary's Basement