Next month you’ll have a chance to see all five Star Trek captains in one place: Wizard World Philadelphia!

Patrick Stewart, known to millions of fans as “Captain Jean-Luc Picard” on the television series “Star Trek: The Next Generation,” and “Professor Charles Xavier” in the X-Men film series, will attend Wizard World Philadelphia Comic Con, Stewart and Wizard World, Inc. announced today. He joins William Shatner (“Captain Kirk”), Avery Brooks (“Captain Sisko”), Kate Mulgrew (“Captain Janeway”) and Scott Bakula (“Captain Archer”) as captains of their respective series in the iconic franchise who will be special guests at the event, set for Thursday, May 31, through Sunday, June 3 at the Pennsylvania Convention Center. Stewart will appear at the event on Saturday.

The Emmy-nominated actor, who has performed in more than 100 television and film roles, is one of several actors to appear in all three “X-Men” films: X-Men (2000), X2 (2003) and X-Men: The Last Stand (2006). His role as Picard, which started on “Next Generation,” placed him in four Star Trek films: Generations (1994), First Contact (1996), Insurrection (1998) and Nemesis (2002). He also served as the voice of numerous animated characters in movies like Chicken Little and Jimmy Neutron: Boy Genius, as well as popular TV shows such as “Family Guy” and “American Dad.”

“Bringing together the five Captains from the iconic ‘Star Trek’ series, capped with the addition of the legendary Sir Patrick Stewart, is a once-in-a-lifetime opportunity for our fans,” said John Macaluso, Wizard World CEO. “They and other standout guests like Chris Hemsworth, William Shatner and Stan Lee make Wizard World Philadelphia Comic Con a can’t-miss event.” 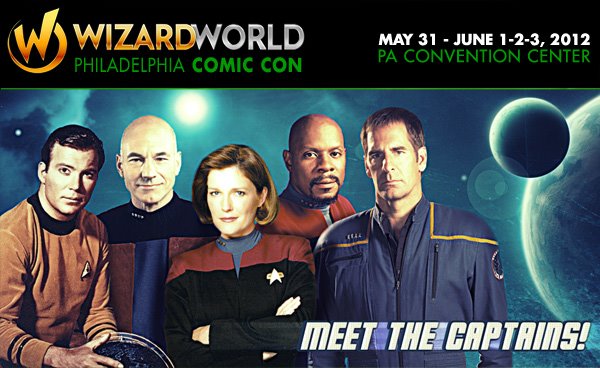