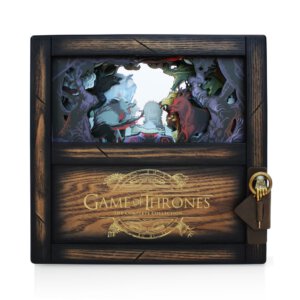 It was a wild ride through all eight seasons of the hit HBO series Game of Thrones and now the entire run will be available just in time for holiday gift giving. The Game of Thrones: The Complete Collection not only collects the entire series on Blu-ray but also features plenty of extras, documentaries, and behind the scenes interviews. There’s well over 75 hours of Game of Thrones goodness in total, set in a stunning limited edition wooden box. The collection will release on December 3rd, 2019 and MSRP information will be available in the near future for both the standard and limited editions.

Rally the realm on December 3rd as HBO is releasing all eight epic seasons of one of the most talked about programs in TV history with Game of Thrones: The Complete Collection, an ultra-premium, limited-edition Blu-ray set. This must-have collectible exclusively features Game of Thrones: Reunion Special, a two-part reunion show with cast members from the final season including Kit Harington, Emilia Clarke, Sophie Turner and more, as well as previously departed fan-favorites like Sean Bean, Jason Momoa, Mark Addy and others. Hosted by Emmy-award winning host Conan O’Brien, the reunion was shot in front of a live audience in Belfast and includes segments of footage from both the show and behind-the-scenes, highlighting a variety of topics that are sure to captivate fans.

Game of Thrones: The Complete Collection is packaged in a visually stunning wooden shadow box case, featuring beautiful, multi-layered panel designs by Robert Ball (the artist behind the “Beautiful Death” series) that summarize the Game of Thrones story. Each season is represented by a different layer, showcasing iconic characters and memorable moments from the show, all clambering toward the Iron Throne. The set also contains a “Hand of the King” pin clasp, which holds all nine custom plated disc sleeves.

Based on the best-selling novel series by George R.R. Martin, Game of Thrones holds the record as the most awarded series in television history, earning a total of 132 Emmy nominations and 47 wins to date. The megahit drama also stands as HBO’s most-viewed program ever, with the final season averaging a record-setting 44 million viewers in the U.S.