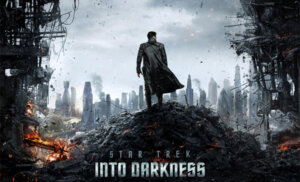 A new teaser trailer for the upcoming Star Trek: Into Darkness, from Paramount Pictures, has hit the web and it’s nearly jam packed with action! For many folks that’s no doubt something to look forward to but in a way I wonder if the Trek franchise is too rapidly moving away from it’s roots, or maybe I should say, the original spirit of Star Trek?

In other Trek movie related news, Benedict Cumberbatch portrays the villain in the latest installment and speculation has run rampant if his character is indeed Khan Noonien Singh. Cumberbatch told Access Hollywood, “I play a character called John and not that other name. It’s interesting. Speculation is speculation and that’s all fun,” he said. “I play John Harrison who’s a terrorist and an extraordinary character in his own right. He’s somebody who is not your two-dimensional cookie cutter villain.”

The star of the BBC hit Sherlock also adds, “He’s got an extraordinary purpose, and I hope that at one point or other in the film you might even sympathise with the reasons he’s doing what he’s doing – not necessarily the means and the destruction he causes.”

“But it was a great ride, not just because he’s the bad guy and the antagonist but also because he has a purpose and it’s hard not to see his point of view at certain points.”