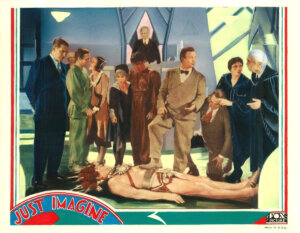 If you’ll happen to be in the Santa Monica area this weekend (and are a true movie buff) you really owe it to yourself to check out the screening of the nearly forgotten 1930 SF film, Just Imagine. The Art Directors Guild (ADG) Film Society and American Cinematheque have a treat in store as they’ll share what very well may be the first Hollywood science fiction film ever produced and, no doubt, a movie you probably never heard of as I know I sure hadn’t!

More about the event:

The Art Directors Guild (ADG) Film Society and American Cinematheque will screen “Just Imagine” (1930), arguably Hollywood’s very first major science-fiction film, on Sunday, August 19, at the Aero Theatre in Santa Monica.  Though “Just Imagine” was reportedly inspired by the grim Metropolis (1927), this rarely seen film is a fascinating musical comedy set in the then unimaginably distant future of 1980 – a future of personal airships and rockets to Mars – starring Maureen O’Sullivan, El Brendel, John Garrick, and the exotic “Joyzelle.” The program, sponsored by The Hollywood Reporter, will explore the film’s place at the very beginning of futurism in American movies, as well as honor the film’s legendary Oscar®-winning Production Designer Stephen Goosson for his major design contributions to this highly influential film.

“Just Imagine,” a very expensive film, was considered only a modest success in its time and almost forgotten. Today it has become something of a “lost” film and nearly impossible to see on the big screen. “While the beautiful art deco sets, enormous miniatures, and remarkable projection effects still amaze,” says Production Designer John Muto, Founder of the ADG Film Series, “the music, comedy, and love story are derived from vaudeville and must have seemed very dated as cinematic musicals exploded in the 1930s. I suspect that may be why the film faded from view.  Our audience will discover a very suprising film!”

“Today, most films set in the future portray a bleak, dystopian, even apocalyptic world. The vision of the future of ‘Just Imagine’ is a beautiful, playful utopia. Prohibition may be a nuisance in their 1980 – but a hero can still woo his girl by leading an expedition to Mars – where he discovers a planet ruled by a showgirl in a chrome sarong!”

“The art direction in ‘Just Imagine’ is unforgettable by any standard,” said Muto.  The centerpiece of the film, an enormous miniature of a future New York City, filled an airship hanger in Arcadia, required more than 200 craftsmen working over five months to build, and cost $250,000 in 1930 dollars! Besides the many classy art deco settings, the film includes a remarkable laboratory set – the first to feature the Kenneth Strickfaden electrical equipment later made famous in the Frankenstein films.  The fantastic rocketship created for the film went on to become Flash Gordon’s trademark spaceship in the most successful serial of all time. “Given that ‘Just Imagine’ had such a unique and unconventional look for its day, it was a remarkable tribute to Mr. Goosson when he was recognized with a nomination for the Best Art Direction Oscar of 1930.”

“Production Designer of ‘Just Imagine,’ Stephen Goosson (1889 – 1973), was Columbia Pictures’ Supervising Art Director for 25 years. A gifted artist, he is responsible for the look of some of the most memorable films in Hollywood history. Goosson worked for a number of pioneer film companies including Lewis J. Selznick, Mary Pickford Productions, Frank Lloyd, DeMille Pictures, and Fox, before being hired by Columbia. Nominated for five Academy Awards®, Goosson won for his magnificent Shangri-La set for Frank Capra‘s Lost Horizon (1937). A very short selection of his other memorable film designs might include “The Lady From Shanghai” (1947), “Gilda” (1946), “The Little Foxes” (1941), “Meet John Doe” (1941), “Mr. Deeds Goes to Town” (1936), and “It Happened One Night” (1934).

“As 2012 heralds the Guild’s 75th anniversary year, we have chosen this visually amazing film as our way of honoring the memory of some of  our industry’s finest artisans and performers such as Stephen Goosson,” said Tom Walsh, President of the ADG.  “The atmosphere at our screenings is very casual and the audience of film enthusiasts, students, and colleagues from the film industry bring  their love of film to the Q&A, which creates an atmosphere for some  lively and entertaining discussions.”