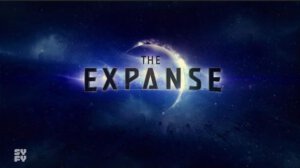 A series I watch religiously is about to make its return to SyFy next month. Based on the hit James S. A. Corey novels, The Expanse packs plenty of hard science fiction alongside hard hitting action as this season the trio of dueling factions (Earth, Mars, and The Belters of the OPA) look to be moving even closer to war; both with each other as well as against the mysterious alien/human bio-engineered protomolecule. I certainly can’t wait for the series return with thirteen episodes beginning April 11th!

Hundreds of years in the future, humans have colonized the solar system. The U.N. controls Earth. Mars is an independent military power. The planets rely on the resources of the Asteroid Belt, where air and water are more precious than gold. For decades, tensions have been rising between these three places. Earth, Mars and the Belt are now on the brink of war. And all it will take is a single spark.