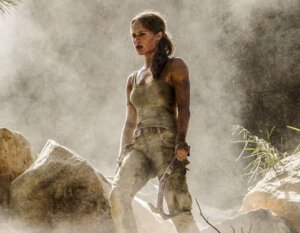 When Lara Croft first made her appearance in 1996 as a heavily pixelated, sexy archaeologist-come-badass, the video game was a maniacal hit. With 7 million games sold, Lara became an icon. For more than a decade, Tomb Raider spins countless, dizzying adventures in all four corners of the globe, never seeming to break into a sweat or lose her indubitable sex-appeal. Indeed, her disproportionate bust size and sexy tops and shorts were pretty much standard all throughout. Even Angelina Jolie as Lara Croft bore an uncanny resemblance to the video game bombshell in everything she did and in the way she looked.

However, game sales had been dwindling all throughout and the game needed a fresh reboot to spark back interest in a figure that defined a gaming generation. Enter 2013 Tomb Raider, with a plot that harks back to Lara’s origins as a young, naïve explorer who hasn’t raided any tombs yet. Sounds familiar?

If you’ve managed to connect the dots, then you’ll realise that the latest cinematic release featuring Alicia Vikander as Lara Croft is based on 2013’s reboot. Gone is the sexy, tight-fitting, bikini clad Lara residing in the family mansion. Instead, we see a more down-to-earth and grounded heroine who works as a bicycle courier in London and can only be said to display badass qualities at her local gym where we first see her. However, this is only a façade. Lara is the heiress of her father’s successful companies but she forfeits the right to claim her inheritance when she refuses to sign documents verifying his death. When her father reaches out to her from beyond the grave through a series of complicated clues, Lara realises she must head out and finish what her father started on Devil’s Triangle, an island off the coast of Japan, where a temple reassuringly called “the mother of death” contains all the answers.

Fans of Alicia Vikander who know her as the slight girl in The Danish Girl or Ex-Machina will be impressed at the transformation she has gone through to achieve a more believable Tomb Raider. She looks strong; in fact, this was the game’s main focus shift, from sex-appeal to athleticism and strength. Croft is mud streaked and bleeds and she suffers through the challenges to create an overall more plausible series of events. Notwithstanding this however, the movie still takes on a video-game feel as Croft navigates impossible jumps and lightning-fast reflexes. The scenes jump as from one game sequence to another, but this time, you’re not at the control (though are fingers ached to be). Instead you get to watch nail-biting scenes that Lara, despite a couple of failures, handles well most of the time.

What does the movie bring to the Lara Croft Legacy? If we take a look at past years, they were always marked by an attempt to bring our favourite heroine back in the right, good graces it deserves. Lara is featured heavily as a theme by gaming industry giants, spawned countless other heroes and heroines and inspired many costume-themed parties with her iconic round glasses and strapped on guns. With the 2013 reboot, there is more of a focus on Lara as a human with a history, rather than a sashaying quasi-robot, mechanical in her dealing with situations and people. Alicia Vikander brings just this to the table, a sense of genuine reality we may all relate to – at least to a certain extent. The movie does little when it comes to script and an Indiana-Jones sequence in the temple (complete with booby traps and puzzles to solve) to ground it into reality. We are still faced with a Lara Croft who manages to do the impossible, embroiled in a mission to save the world, as we know it. A very comic-superhero-like motif running here. However, this may just be what the older fans of Tomb Raider are looking out for, a heroine who is more grounded than the original one was, but can still pack a punch and maneuver
through obstacles like she was born to do just that. In that case, then the movie is a winner on all fronts.

I think Tomb Raider should be met lightly, with an open attitude and a mind to enjoy silly banter, good action sequences and a decent cast that entertains. While we will undoubtedly see more of Vikander’s interpretation of Lara Croft, I’m already pleasantly entertained with the result so far. It breathes new life into a franchise which has seen much changes through the years but which remains true to its core – a good story, thrilling action and a leading lady who can be just as tough as she needs to be in a world that is mostly dominated by men. Kudos to that, Lara! Go and live to fight another day.