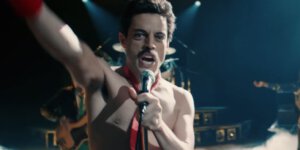 Rami Malek is currently the favorite to win Best Actor for his portrayal of Freddie Mercury in Bohemian Rhapsody, followed by Christian Bale who played Dick Cheney in Vice and Bradley Cooper for his turn as Jackson Maine in A Star is Born.

Malek should feel comfortable opening up shelf space on his mantle for one simple reason: he won Best Actor, Drama at the Golden Globes.

Sascha Paruk from sportsbettingdime.com recently delved into the correlation between Oscar winners and Golden Globe winners over the last half decade. He found that each of the last five men who won Best Actor, Drama at the GGs also took home Best Actor at the Oscars.

Paruk limited his scope to five years, but the trend actually dates back further. Daniel Day-Lewis and Matthew McConaughey took home both awards in the two years prior, so it’s actually been seven straight Best Actor, Drama winners who have gone onto win the Oscar.

The last time the Oscar winner didn’t win either Best Actor award at the GGs was all the way back in 2009. That year, Sean Penn won the Oscar for Milk, while Mickey Rourke won Best Actor, Drama for The Wrestler and Colin Farrell won Best Actor, Musical/Comedy for In Bruges.

But Penn’s Oscar win in 2009 should only give Malek more confidence that he’ll be adding to his trophy case. The Academy has shown a penchant for honoring actors and actresses who play real-life icons.

Last year, Gary Oldman won as Winston Churchill. In 2015, it was Eddie Redmayne as Stephen Hawking. In 2012, it was Daniel Day-Lewis as Abraham Lincoln. The list goes on.

There is much less history of the Oscars honoring actors who play real-life villains, and that’s exactly what Dick Cheney is to the Academy. Bale even thanked Satan for inspiration in his GGs acceptance speech. It’s not unheard of. Forrest Whittaker bucked the trend when he won as Idi Amin in 2007. But for anyone wanting to make a bet between friends on the Oscars, almost all the trends point to Malek.