To say Absalom, City of Lost Omens is substantial is a gross understatement. Clocking in at just under 400 pages, the book is a comprehensive look at one of Pathfinder’s most famous locations, including its history, government, culture, trade, military, and power players — along with the fallout of their actions. Region by region breakdowns offer a detailed look at key locations, including local challenges and intrigues. Profiles of major NPCs offer a directory’s worth of interesting personalities to drop into a campaign or incorporate into a character’s backstory.

City of Lost Omens faces a difficult challenge in imparting flavor without overwhelming readers or devolving into a textbook-style information dump; thankfully, the authors have a wonderful sense of pacing, displaying a strong understanding of how much information to include and at what level of detail. The generous use of sidebars helps to highlight interesting pieces of lore and flavor that may spark readers’ imaginations while keeping the main body streamlined and moving at a good clip.

One mark of a good sourcebook is its ability to provide concrete structure in the form of canonical worldbuilding and then use that structure to create intentional gaps for players and GMs to fill in. The fey prince Juroval may have been tricked into banishing himself form the plane, but what became of his weapons? His treasures? What happened to the records and research that drove this outwitting? Who might have custodianship of them and what might they want In exchange for access? Absalom, City of Lost Omens is rife with these kinds of moments, again highlighting the sophisticated use of detail and “white space” in constructing the world not as a flat fictional setting, but a dynamic sandbox for players and GMs to shape and influence.

Another key strength comes in the diversity of potential plot hooks for both major campaigns and smaller sidequests. While martial and dungeoncrawling adventures are certaintly present, GMs might also look to drag players into the ongoing Shadow War or lead them into a more direct hand in working to select a new Primarch — or perhaps ensconce the “acting” one, even against his wishes. Even smaller opportunities have meaty potential: sent to deal with Reginald Vancaskerin and his seedy Eyes of Absalom tabloid which is poised to publish a salacious and (almost) entirely untrue tale that could upend peace in one of the city’s districts, how will players respond to the unscrupulous publisher and secret worshipper of Norgorber?

These same kinds of hooks are just as easily applied for players, helping to develop interesting and dynamic characters who are already enmeshed in the fabric of the city. A character may not just be a spy, but perhaps a member of Lady Dyrianna’s extensive network who has seemingly set off on their own. Perhaps they’ve become Donnica Mycelene La-Tep’s first apprentice, helping to set her “Con con” in motion and make the docks a better, safer neighborhood for all.

City of Lost Omens stands out for the raw skill on display in its writing. In addition to the skill on display in the pacing, there’s a wonderful tendency to show rather than tell, helping the world to really breathe and exist as a fully-formed concept rather than a flat series of set pieces. It’s one thing to tell readers that Absalom’s residents are of two minds about acting Primarch Wynsal Starborn, and another to tell you that in one breath, residents will praise Starborn’s liberal policies and in the next, question whether his three-year tenure is really all that different from a military coup. Along those same lines, describing Dooley Gavix’s encounter with a “huge winged shadow” and how he “is certain they saw a dragon that night and won’t stop talking about it” and that “[h]e’s already written three songs about the event and one of them is even pretty good” has a far greater impact that just telling readers the musician-in-training is excitable and young. This quality of prose truly helps sell the setting and keeps readers going through the information-rich tome.

Absallom, City of Lost Omens is a delightful entry to the Pathfinder canon and should be a no-brainer for those looking to run campaigns in or create characters with ties to the titular city. The book’s appeal, however, extends far beyond that and should catch the interest of anyone looking to hone their craft as a writer of living worlds.

Sami Yuhas
Writer, gamer, and necromancer bard (at least in D&D). Sami focuses primarily on board and tabletop gaming, with a focus on sci-fi and fantasy, as well as worker-placements and co-op titles. She prides herself on the ability to overthink world building in games, and cites a three post manifesto on the costuming of XCOM 2 as among her greatest nerd achievements.
Latest posts by Sami Yuhas (see all)
Tags: Paizo Inc, Pathfinder, Pathfinder Lost omens, Pathfinder Lost Omens Absalom City of Lost Omens 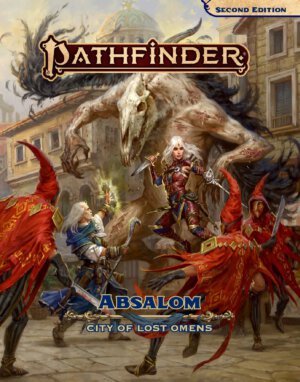