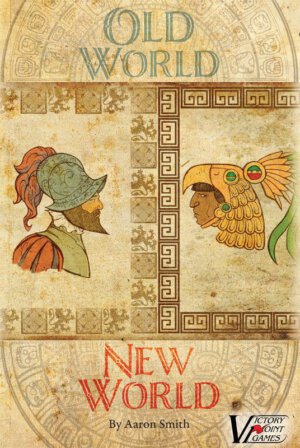 If you’ve ever wanted to put yourself in the boots and saddles of famous explorers like Alvar Nuñez Cabeza de Vaca, Samuel de Champlain, or Sir Walter Raleigh you might be very interested in checking out VPG’s Old World New World (OWNW). Designed by Aaron Smith, OWNW is a quick playing game of tile laying world building and discovery for two to four players. Each player will attempt to map out unexplored terrain as they move three units from one side of the board to the other.

As with most of the current lineup of VPG titles, the components in OWNW are nice all in all although you’ll really want to find a way to protect the square cards. While I mention this is a game which involves tile laying, those tiles are actually the cards. I have to say the card stock is pretty good but if you’re going to be playing quite a bit you could see the cards wear out sooner than you might hope. 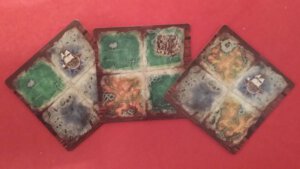 The cards themselves represent either terrain (58 cards) or special actions (14 cards). Each terrain card is divided into four quadrants which can depict ocean, mountains, or plains and these normally also contain a Port or Camp symbol. The Special Actions are events which can either help the player or hinder their opponents. Also, two terrain card represent nasty volcanoes.

Play begins by assembling the card frame in which terrain cards will be placed to build the map; the boarder will contain a six by six grid of cards. Then each player will draw to five cards to begin their opening hand and take their respective playing pieces. The pieces are duel sided and represent either Soldiers or Ships and the players have a supply of six these units.

Each turn the active player may play two cards and perform any free actions or choose to discard as many cards as they like. Keep in mind if the player chooses to discard they won’t be able to play any cards that turn. Once the card playing phase is complete the player draws back to five cards and it’s on to the next player. Things move along pretty quickly as Old World New World involves some light decision making but not so much to promote analysis paralysis.

Players may place cards beginning with a bottom row of the card frame; the bottom two quadrants of the card becomes that player’s Home Row. Units will be deployed within the Home Row and if you place terrain which contains either a Port or Camp in your Home Row you’ll also get to Deploy either a Ship or Soldier (whichever corresponds with the terrain type) as a Free Action. Laying terrain is pretty straight forward as you’ll look to make the path across the map easier for your units while dropping pitfalls in front of your opponents. 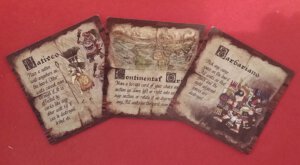 Other than laying terrain, players can Burn cards to bring about different actions.

Move a Unit – Units can move any number of spaces as long as they continue on a straight line (up, down, left, or right) through any unbroken terrain of their type; Ships through oceans and Soldiers through plains. Other units and mountains will bring units to a halt and another card will need to be burned to move into the mountain space.

Deploy a Unit – Burning a card containing a Port or Camp will allow the player to Deploy a corresponding unit to an already placed Port or Camp. Units can also be deployed to a Home Row space as long as the terrain of the burned card matches one of the terrain types there – you don’t need a Port or Camp in that row. Each plyer can only have six units on the map at one time so if you have all in play, and want to Deploy another, you’ll need to remove one from the board.

Convert – Since Soldiers can only move through ocean spaces and Ships can’t traverse plains, sometimes you’ll need to Convert a unit. Simply enough you can Burn a card with the correct symbol to flip the counter and move into a corresponding space. For example, you’d Burn a Port card to turn a Soldier into a Ship and then move the unit into an adjacent ocean space.

You also have Free Actions which can come into play such as Deploying a Ship or Soldier to a Port or Camp once you lay it in your Home Row. One action you’ll use quite a bit is the Free Move. If you Deploy a unit to a previously placed Port or Camp then you may make a single legal move. You can also string these Free Moves together (moving from Port to Port to Port or Camp to Camp to Camp) to quickly move across the board.

Once a player has moved three units to three different spaces in the final row of the map board opposite their Home Row, they’re declared the winner. 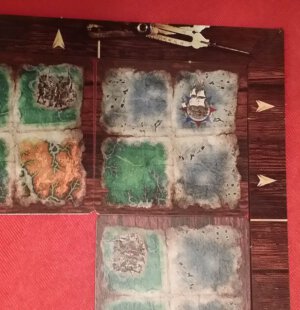 Old World New World is quite a bit of light fun and a nice take on the traditional tile laying genre. Much of the time you’ll be looking at not only how to get your units across the map but also making life difficult for the other players. You’ll make things tougher on your opponents not only by placing disadvantageous terrain in their way but also using Special Actions to thwart their plans. Many of these cards destroy units or place obstacles, such as natives, in their path. In other words, if you don’t like games which make you deal out some “take that” – and being on the receiving end as well – you might want to steer clear of OWNW since there’s no way to play without messing with the other gamers.

I will mention a bit of an issue I have with the design as it currently stands though. As the game progresses, more and more cards will be in play as terrain (36 cards) so eventually you’ll begin to recycle the discarded cards and the Special Actions begin to make up a large percent of the deck; whenever the deck runs out you reshuffle the discards (or Burned cards) to create a new deck. The problem is a game which started out breezing along starts to slog because so many of the Special Actions remove units from the board and it becomes a contest of who can continually lay the whammy down on everyone else. I’ve found using a house rule to remove Special Actions, once they’ve been played, speeds up the game and helps prevent everyone feeling like they’re getting heaped on as they near the end game.

VPG has built a reputation of creating interesting titles you can easily bring along on a road trip or break out for a good hour or so for game night. Old World New World fits the bill and, even if you don’t choose to try my house rules, should entertain those looking for a quick Euro fix. You’ll like OWNW even more if you dig some “screw your neighbor” tossed into the mix.

TGG REVIEW
7 TGG SCORE
0 VISITORS' SCORE (0 votes)
Summary
VPG has built a reputation of creating interesting titles you can easily bring along on a road trip or break out for a good hour or so for game night. Old World New World fits the bill and, even if you don’t choose to try my house rules, should entertain those looking for a quick Euro fix.
REVIEW SCORE
What people say... Leave your rating
Sort by: