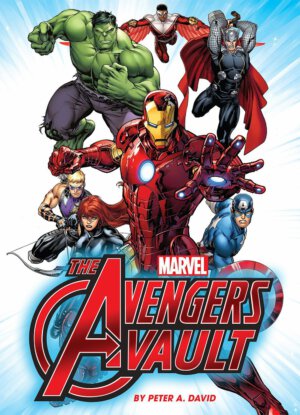 Just in time for the upcoming Avengers: Age of Ultron, Marvel and Thunder Bay Press have teamed up to present an in depth primer on the superhero team we lovingly call Earth’s Mightiest Heroes. Not only are we introduced to the history of the Avengers as a whole but also that of the core four members of the team (or the core of the current film line up I should say): Captain America, Iron Man, Hulk, and Thor. Assigned to the task of delving into over fifty years of Avengers lore is legendary comic writer Peter A. David.

Readers learn not only about each character’s place in Avengers history but also their solo careers outside the group. The core four each receives about thirty pages of treatment including their origins, some of their most memorable story arcs as well as their most diabolical villains; Captain America’s battles against the Red Skull, Iron Man and the Mandarin, Thor and Loki, as well as Hulk’s entanglements with the Leader. Obviously, whole volumes could 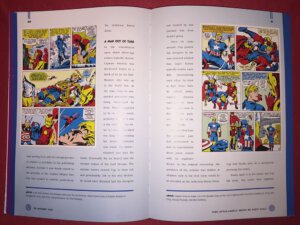 be written about each of the heroes so even some of the greatest stories don’t make the cut. I was pleasantly surprised the Ultimate line is discussed as it isn’t a huge part of Avengers lore but for those who’ve followed the offshoot it’s interesting to see how the characters differ from the 616 universe. Small portions of the book look at the animated and film versions of the team and an appendix runs down the roster of the various Avengers teams too.

The Avengers Vault is jam packed with both classic art and more contemporary images and covers. What stands out for myselfl is the inclusion of many full page layouts prior to their coloring or inking. Unlike most comic book related titles, the reader is treated to a nice peak at the pencils of iconic pages as the artist provided.

What I found to be most interesting about The Avengers Vault are the extra goodies included in the book. You’ll find five, page sized pockets dedicated to each major chapter (The Avengers, Captain America, Iron Man, Thor, and Hulk) and they contain items such as an 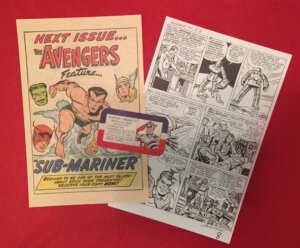 advertisement for The Avengers #3 as it appeared in Avengers #2, a replica of a Captain America Sentinels of Liberty membership card, and even Jack Kirby’s final panel ever drawn for Marvel: A close up of Hulk’s face. Each of these could easily be framed and are a real selling point of the book.

Truthfully, for most longtime fans of the Avengers comics there really aren’t any new discoveries within the text of The Avengers Vault. Yet, the book isn’t aimed at those already steeped in Avengers lore but more for readers who are just discovering the tales the mega hit movies are drawn from. David provides a nice and briskly paced rundown on the team and its members which makes for a fun read.

While The Avengers Vault doesn’t provide any true revelations about the superhero team, or the creative process involved in the history of the series, it’s an enjoyable read  and those extra goodies are a great inclusion. For anyone looking to learn more about Earth’s Mightiest Heroes, The Avengers Vault is a great start and those who consider themselves an expert on the Avengers those special inserts are nice enough to consider giving the book a solid look.

While The Avengers Vault doesn’t provide any true revelations about the superhero team, or the creative process involved in the history of the series, it’s an enjoyable read and those extra goodies are a great inclusion.