Nightmare Scenario kicks off moments after the conclusion of The Perfect Storm with the crew of the Primorata unsure of where or when they are. There’s no time to lose, however, as the characters are quickly pulled into a dangerous rescue mission pitting them not only against the gravitational pull of a massive black hole, but a scheming AI, before being called upon by an emissary of the goddess Desna. It’s a fun, varied adventure that leads characters on a series of interlocking quests to do good before thrusting them right back into the fight.

Nightmare Scenario offers a nice blend of challenges for characters, ranging from social interactions to hacking to a photo safari and, of course, combat. No matter the makeup of a given group of player characters, everyone has the opportunity to shine and even, possibly, save the day. Fans of Mr. Rogers’ timeless “Look for the helpers” will no doubt enjoy this scenario as it allows player characters to do measurable good in the wake of absolute chaos. For some, it will make the scenario’s unavoidable deaths all the more painful — for all the good characters can do, there will inevitably some lives they can’t save.

The additional information on the Church of Densa and the Cynosure highlights the vibrancy of the world and offers GMs plenty of new adventure hooks, potential drop-in encounters, and sidequest hooks in case players need help clearing the bar to the next level before proceeding on with the adventure as written. Between this section and the time spent in Cynosure during the adventure proper, it’s clear Desna’s realm is one worth revisiting and will certainly be a fun resource for GMs to pull out in their own adventures or, perhaps, for Paizo to visit again in a later Adventure Path.

The art is wonderful with the full page pieces truly giving a sense of scale and atmosphere. Cynosure feels truly magical and its evident how closely its tied to Desna herself. There’s something truly haunting about the sight of the Final Horizon, an enormous floating gothic cathedral and monastery, drifting towards its final horizon in the opening piece and the Curiosity’s tiny lifeboat feels as vulnerable as it is.

While Nightmare Scenario offers plenty of emotional payoff, its final chase somewhat blunts the horrific reveal that immediately precedes it, which in the grand scheme of things, is a minor complaint; in any scenario, some beats have to be allowed to hit harder than others and it’s clear that the other major death in the scenario is undoubtedly given the time to register.

Fans of The Perfect Storm Adventure Path will no doubt be thrilled to return to their characters and take up the fight one more, while those jumping in with a modified start will quickly be drawn into the struggle. Nightmare Scenario offers a fun and interesting set of challenges and a nice reminder that heroic deeds come in many forms.

Sami Yuhas
Writer, gamer, and necromancer bard (at least in D&D). Sami focuses primarily on board and tabletop gaming, with a focus on sci-fi and fantasy, as well as worker-placements and co-op titles. She prides herself on the ability to overthink world building in games, and cites a three post manifesto on the costuming of XCOM 2 as among her greatest nerd achievements.
Latest posts by Sami Yuhas (see all)
Tags: Jenny Jarzabski, Paizo Inc, Starfinder, Starfinder Adventure Path 47 Nightmare Scenario, Starfinder Drift Crashers 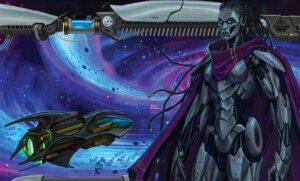 Fresh from escaping Malacanta, players are immediately called to action in a series of daring rescues and good deeds when the goddess Desna intervenes in Nightmare Scenario.
7.5
Good