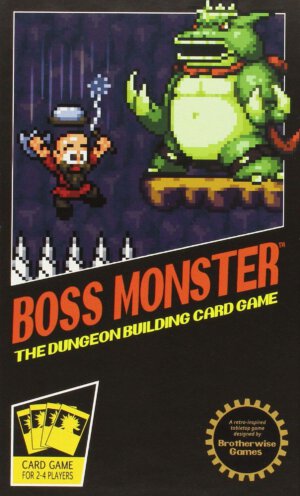 Tabletop gamers with a strong love of retro video games will feel right at home with the presentation of Boss Monster as all the artwork is inspired by classic hits of yesteryear. I will mention I was never a huge video gamer when it came to side scrollers and platformers so I’m sure I don’t catch most of the inside jokes and Easter eggs contained on the cards but that doesn’t mean I still don’t get a kick out of them, as lot of references to pop culture are made as well. Granted, I’m sure plenty of people will get the gaming gags a whole lot better than I though.

A Peek Inside the Box

Two to four players take the roles of the biggest, baddest, most evil dungeon bosses in the universe. Your goal is to create a veritable deathtrap for any bold hero foolish enough to step foot into your lair. You’ll need to gather ten souls, before the horde of invaders deal you five wounds, in order to be declared the winner.

This is easier said than done as you’ll need to have specific rooms which will draw in the four types of do-gooders looking for loot. Clerics are drawn to holy relics, weapons of legend are the targets of Fighters, spell books bring in Mages, and Thieves are looking for money bags. In order to bring these victims along to their doom you’ll need to have rooms with more of the specific treasure a hero is looking for than your fellow boss monsters. Not only do you need more treasure but also build rooms which will deal enough damage to kill the rube before they arrive in your boss chamber otherwise you’ll take wounds.

The heart of the game isn’t just in laying randomly drawn room cards (you can have a maximum of five rooms) as only through repeated plays will you begin to understand the different combos you can use to build your dungeon; have too many of one type of room and you won’t draw enough heroes to collect the souls to win while too many different types will leave you out in the cold as far as creating strong combos. The rooms can also have special abilities as well and provide even more options for you to take advantage of in a phase or turn during the game.

You’ll begin by removing hero cards depending on the number of players; in a full four player game all the heroes are utilized. Then you’ll shuffle the Room, Spell, Boss, and two Hero (Basic and Epic) decks. Then each player is randomly dealt a Boss card. Each Boss has a special Level Up ability which is activated once the owning player first completes the fifth room of their dungeon. The Bosses also have an XP value but this is really only used to determine who goes first and can be used as part of a tie breaker.

Everyone receives five Room cards and two Spell cards at the start and allowed to keep five cards. The remaining two will be placed in the discard pile once all the players have chosen their cards. All the players will then select one room to build and place that face down to be simultaneously revealed. Some Rooms also have an effect which triggers at the moment it’s built and if more than one player is building a room with an effect, they are resolved in the order of Boss XP – highest to lowest. Now that everyone has their Boss and first Room out on the table the game can get rolling.

The turns are broken into phases…

Start of Turn Phase – Reveal one Hero (all the Basic Heroes have to arrive before you start drawing from the Epic Hero Deck) for each player and place them face up in the town area of the table. Then all the players get to draw a Room card.

Build Phase – In order of Boss XP players now have an opportunity to build a room. You can either add a room to your side scrolling dungeon or choose to build upon an already existing room. Ordinary Rooms can always be built upon existing Rooms and Advanced Rooms will have prerequisites before you can build them on top of something else. Remember your dungeon is only five rooms max and you’ll be eyeing those heroes hanging around town (you need those souls!) so you’ll find yourself changing up your layout quite a bit. The Room cards are placed face down and once everyone has a Room selected, or passed on building, the cards are flipped over and are now considered built.

Some Spell cards are marked with a hammer and this indicates it can be used during the Build phase. I also previously mentioned some Rooms have an effect which triggers when they’re built so both Spells and effects are resolved in Boss XP order, from highest to lowest. 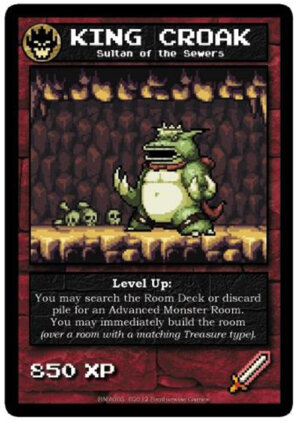 Bait Phase – Now the ripe pickings hanging around town will be sniffing treasure and migrate to whatever dungeon contains the most icons related to their class. I.E. Mages will make a beeline for the dungeon with the most combined Tome icons. In the case of a tie for the most icons the respective Heroes will stay put in town. Sometimes it may look like there’s a convention in town if players continue to remain tied for a few turns in a row…

No Spells or Room abilities can be used in the Bait phase.

Adventure Phase – In high to low order of Boss XP those Heroes milling around the entrance to your dungeon will now begin to run the gauntlet in an attempt to gobble up treasure and put a hurt on that Boss. The Heroes don’t team up though (They’re a fairly unsocial lot I suppose – this isn’t Double Dragon you know!) and each Hero will proceed along one at a time. Each Room entered can deal damage to the Hero and Spells with the axe icon and Room abilities can be used to thwart the dungeon run. If you have multiple Heroes queued up to take a pop at you, and activate a “once per turn” ability, you won’t be able to use it again on the remaining trespassers. All players take turns having each Hero trek along so one player isn’t monopolizing the phase. Plus it give everyone a chance to toss those Spells around.

If the Hero runs out of Health before reaching the Boss chamber “they gone!” and the card is placed in your score keeping pile with the number of souls (one or two) counting toward the ten you need to win. If the Hero does make it to the Boss you take that card and place it in a pile to track your wounds and lose one or two of your own five Health points. If your Boss has taken five wounds you lose and are out of the game.

End of Turn Phase – This is mainly clean up where any “end of turn” effects end and Rooms are reset. Also if any Heroes are returning to the entrance of a Dungeon, or back to town, because of a card effect they’ll be good as new the next turn; damage to Heroes doesn’t carry over.

Once a full turn has been completed, and any of the players have collected ten souls while having a Boss still standing, the game ends and that player is declared the winner. If more than one player meets the winning condition then subtract the number of wounds from the number of souls and the highest total takes the game. If you’re still tied after that then the player holding the Boss with the lowest XP wins. 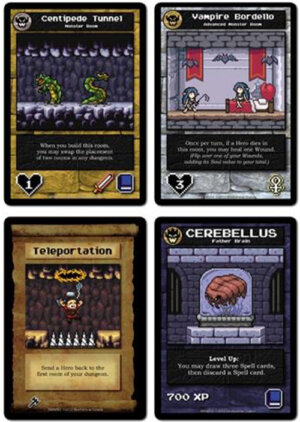 I’ve got to say I found Boss Monster to be a lot of fun! A couple of my fellow players had a couple of gripes though. The first thought the game was too luck driven although I asked what card game isn’t? There’s a reason behind the saying “luck of the draw” so I didn’t feel that was a very valid complaint. Another player pointed out they didn’t like the fact the high XP Boss player always went first in all things and that struck me as a more legitimate beef; the only benefit of the lowest XP Boss is the second tie breaker. In order to deal with that issue, in the next game we stuck with the high XP going first during the initial turn and simply used a coin to pass clockwise each turn to indicate who was going to go first. Truthfully though, I don’t believe it mattered too much in the great scheme of things but it’s an option if someone doesn’t like the current turn order resolution.

Boss Monster is fun, fast, and chock full of good humor. Even without an extensive knowledge of classic video games very few cards will produce anything less than a smile. The game itself has a bit more depth than one might expect and repeated play will certainly help you appreciate a level to the game that does immediately meet the eye. Add to this the low price point and you have an excellent addition to your collection of games to wind up or wind down an evening with friends although the title is the most fun with a full complement of four.