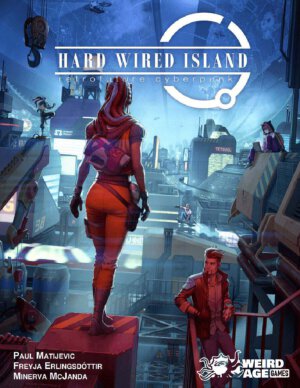 The retrofuture of the 1990s comes to the table in Hard Wired Island, a post-cyberpunk dive into an alternate present which feels all too familiar.

In the world of Hard Wired Island, a meteor impact struck Earth’s northern hemisphere on March 27, 1996. 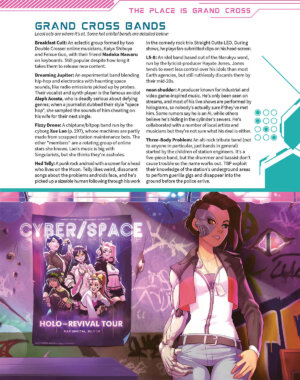 Known as “Impact two,” the consequences were devastating, far-reaching, and long-lasting with recovery only truly beginning in earnest by 2006. In the wake of the disaster, governments and corporations from around the world turned their gaze from a suffering planet to the vast promise of the stars. One of the results of these efforts was the Grand Cross Program, a major settlement space station capable of sustaining millions of people with minimal assistance and of serving as humanity’s “jumping off” point for further exploration.

Despite the utopian ideal, however, humanity’s old bad habits have made their way onto Grand Cross. As corporations battle for influence and control, the station’s everyday citizens find themselves caught in the crossfire, facing down rampant inequality, dwindling personal privacy, and a government unable to shake itself free of corruption.

In other words: for all its neon trappings and cybernetics, Hard Wired Island is very much a game that deals with the reality of our present as much as its alternate.

One of cyberpunk’s greatest challenges as a genre is the pernicious habit of equating greater technology use and integration with diminished humanity. Given its real life parallels for disabled individuals who benefit from 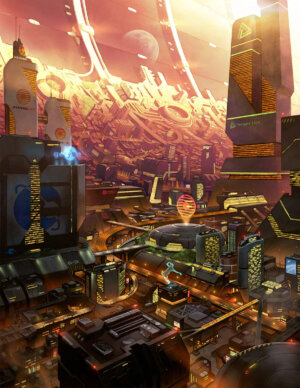 technology use and bodily integration, this is a slippery slope that Hard Wired Island chooses to directly avoid. While alienation and dysphoria can and do occur, it is the result of being caught up in corporate schemes rather than any inherent by-product of the augmentations themselves. A sample character is a completely augmented cyborg who experiences euphoria and deep contentment as a result of their augmentations, but who must also contend with the stress of expensive and potentially unreliable maintenance. Hard Wired Island’s decision to explore humanity’s relationship with technology as a by-product of the corporations who create and control it rather than as any intrinsic force helps GMs to craft more timely allegories while still keeping the cyberpunk spirit alive.

Hard Wired draws from classic 90s animes such as Cowboy Bebop, Ghost in the Shell, and Bubblegum Crisis, but it’s hard to miss the way the team has also integrated our modern reality into the setting as well. For example, Aspiration, the first shuttle to transport American settlers into space, mostly ended up at the National Air and Space Museum, with the notable exception of a seat purchased by a billionaire and converted into a gaming chair — not that any contemporary space-inclined billionaire would ever do such a thing.

Character creation and gameplay are both well-explained. Character creation in particular deserves a round of applause for its explicit in-line support for player creation and adaptation. This is a game that understands its design mechanics well enough to pop open the hood and offer brief, actionable guidelines in easy to follow 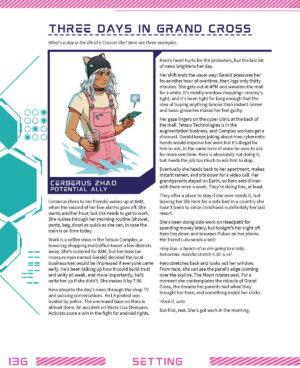 language, which is no easy feat. Likewise, Hard Wired provides a visual breakdown of probability for roll results, helping even the most math-averse GM to appropriately set roll difficulty relative to the narrative difficulty of the task .

The book’s full-color art helps to reinforce the mood and sense of setting without being intrusive or distracting. The page design elements emphasize the influence of 1990s sci-fi, but still manage to feel fresh rather than pastiche. OVerall content layout makes sense and prioritizes players’ ability to jump in and get started while still providing the GM ample support, including plot hooks and roll tables. The PDF is hot-linked, helping to ease the strain of navigating a 400 page document on screen.

Hard Wired Island offers an updated take on retro cyberpunk that’s primed for the stories it wants to tell and the questions it wants to ask. Though the game does appropriately venture into darker territory, it does so from a place of good faith critique rather than a need for edgy controversy. Striking a balance between a meticulously planned setting and one ripe for customization, the game knows how to let a GM shine while still providing a world that can be enjoyed as written. For those interested in a fresher take on a stalwart genre or who prefer their nostalgia of the 90s variety, Hard Wired Island is a solid offering that knows how to deliver.