Drift on In: Starfinder Adventure Path #46 – The Perfect Storm Reviewed

An adventure dealing with a crisis as massive as the Drift Crash has to walk a fine line, imparting the scale of the emergency without losing focus on the personal and immediate impact for characters. Overwhelm players with descriptions of large scale destruction and you risk losing the sense of personal stakes. By setting the start of the adventure minutes before the cataclysm, Jessica Redekop commits to the added challenge of selling the emotional reality of the panic, confusion, and desperation that might accompany such an event.

Thankfully, The Perfect Storm manages that nicely with player characters kept on edge as they attempt to contend with a situation spiraling ever further out of their control. The adage of “out of the frying pan and into the fire” comes to mind, but when a pirate attack is, by far, the least of the party’s problems, it’s safe to say events have rendered it a gross understatement. The Perfect Storm truly is a nonstop adventure, which poses something of an issue for GMs; without the usual means to rest, recuperate, and restock, player characters will likely need a friendly NPC or well stocked supplies in order to compensate. After all, it’s a bit hard to run to the shops with the Drift out of commission and though hardscrabble survival offers its own storytelling challenges, it’s clear that is not within this narrative arc.

The nature of the Drift extends far beyond faster than light travel and instead breaches planar boundaries. This opens the door for some truly strange and unsettling events — the fate of the Marata and the Primordial being a key example. While forcing players to confront their evil doppelgangers does feel tropey, it does keep the stakes personal and immediate to the characters, even beyond Malacanta’s threat.

Despite being an adventure designed for first-level characters, The Perfect Storm isn’t a great fit for introducing new players to the story world, though that’s not necessarily a bad thing. Familiarity with the world, its locations, and the general state of affairs pre-Crash is key to selling the horror of the third act reveal which will, in turn, likely drive the remaining two adventures in the path. Players who have previously spent time within the world are primed to understand the ramifications and, more importantly, to feel some stake in its fate. As such, The Perfect Storm offers a compelling opportunity to experience a defining event in the Starfinder canon.

The Perfect Storm offers players a personal hook into a game-defining event while still allowing the magnitude of its implications to shine. Jessica Redekop’s pacing helps to bring the sense of urgency and desperation to the table, allowing players to connect and immerse themselves in the story. While the ending cliffhanger nicely foreshadows the opening of the next chapter, the bigger third act reveal teases much higher stakes to come.

Sami Yuhas
Writer, gamer, and necromancer bard (at least in D&D). Sami focuses primarily on board and tabletop gaming, with a focus on sci-fi and fantasy, as well as worker-placements and co-op titles. She prides herself on the ability to overthink world building in games, and cites a three post manifesto on the costuming of XCOM 2 as among her greatest nerd achievements.
Latest posts by Sami Yuhas (see all)
Tags: Jessica Redekop, Starfinder, Starfinder Drift Crashers, Starfinder The Perfect Storm 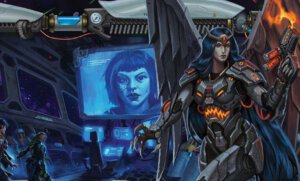 Drift on In: Starfinder Adventure Path #46 – The Perfect Storm Reviewed

Things go from bad to cataclysmic as players find themselves caught up in the Drift Crash in The Perfect Storm, the first chapter of the latest Starfinder adventure path.
8
Good