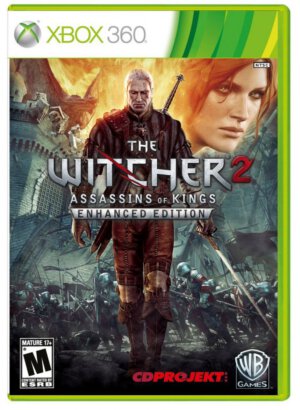 The Witcher 2: Assassins of Kings was an obvious choice for last year’s best role-playing game – an exciting and captivating story, a rich universe (maybe stuck in fantasy’s typical archetype but still…) managing to differ from the norm. Add to the mix strong writing, amazing characters, loads of DLC (at no charge), and stellar visuals that made your jaw drop – assuming you had the rig to handle the specs and you have a winner.

And then along came Skyrim and The Witcher 2 was almost forgotten. Understandably so considering how immense and depth oriented Skyrim is – I alone have spent nearly 100 hours playing the Bethesda release and still have unfinished side quests. 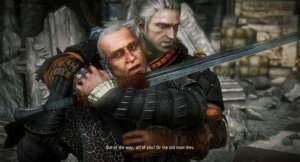 But last year’s very best RPG-that-is-not-Skyrim was still a well-deserved success, especially when you consider The Witcher 2 was only released on PC. Now the game also has landed on Xbox 360, that success will only grow greater.

It’s been almost a year since The Witcher 2’s PC release and the developers at CD Projekt Red have certainly not been sitting on their respective hands. The title has been updated, enhanced and expanded; most recently with the 2.0 patch, which introduced a new arena-game type, adjusted the difficulty, adding a tutorial to introduce players to the most important game play aspects both inside and outside of battle which fixes one of the main issues the title originally upon release.

Xbox 360 owners also benefit from all of these additions and enhancements meaning this console release is a more refined one than the PC version last year. Those tweaks don’t equate to the “Enhanced Edition” subtitle alone as CD Projekt Red had graphic artists, designers and writers working the past year  to offer unique content. The result is a beautiful pre-rendered intro that sets the mood and more importantly, many additional side quests, which add roughly four hours of game play to the titles already considerable length. Otherwise, most of the original content has survived the conversion to Xbox 360 intact. We still play as Geralt of Rivia, the Witcher, an almost superhuman monster hunter with an edge.

Geralt is accused of a royal murder he didn’t commit and sets out to find the real killer, prove his innocence, show the assassin plans to spill more royal blood and (because the assassin is also a Witcher) possibly illuminating parts of Geralt’s past he has yet to recall.

Environments are still as unwelcoming and full of rage as ever.  The non-human races such as elves and dwarves are deeply oppressed, with some waging an open hit & run style war with the humans. Danger and intrigue are ever present while you will need to watch what you say and to whom. The story branches to such an extent, depending on your choices, you’ll probably miss a good chunk of content on your first full play through. 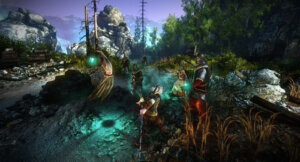 CD Projekt Red’s conversion of the game from PC to Xbox 360 is unbelievably perfect. Almost every port from PC to console or vice versa has some major issue or glitches. That’s not the case here as The Witcher 2 looks great and the complex combat system is mapped neatly and orderly to the game pad as well. This made for, in my opinion, an almost seamless transition from the PC version. The release does show the divide between the Xbox 360 and PCs when it comes to visuals however.  The Witcher 2 was originally designed to utilize all the PC’s graphic and processing power thus offering a game more visually detailed than the console version. Also, it’s important to note, you WILL notice dreaded lag in loading when you go from one major area to another. Yet despite these minor – and I stress they are minor – issues the game still looks terrific.

If you already have the PC version of The Witcher 2: Assassins of Kings, then there’s little reason to buy the Xbox 360 edition, especially since all current owners of the PC version will get a free update that’ll include all the new additions found in the console’s “Enhanced” release.

If you enjoy the genre and have yet to play Witcher 2, this is a no brainer to pick up. One of last year’s best role-playing games has become a tad better and The Witcher 2 is “virtually” as stunning via the Xbox 360 as it was on a powerhouse PC. If you haven’t played the title you NEED to enter the world of The Witcher 2! Truly Dragon Age meets Skyrim with a hint of Underworld. Or in other words…

Trust me, it works!

Tony Manchen is an avid Console & PC gamer who has a passion for making sure the gaming public has the information he feels is necessary to make an informed decision.

The Witcher Pen & Paper RPG Reviewed on The Daily Dope #266

The Witcher Pen and Paper RPG is Now Available in PDF