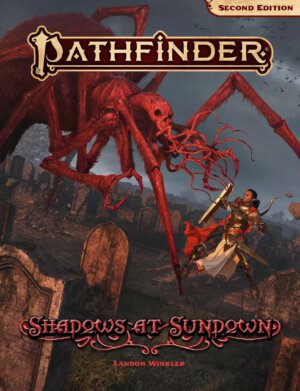 Shadows at Sundown finds players summoned by Queen Cressida to investigate sightings of the terrible Queen Ileosa’s ghost. The city has just lost its Bishop, leaving everyone on edge. In order uncover the nefarious plot and save the city, players will need sharp blades and sharper wits.

While Shadows at Sundown may have extra weight for those who have played the Curse of the Crimson Throne Adventure Path or the standalone Academy of Secrets, there’s plenty here for those just coming to Korvosa for the first time. The Adventure Toolkit provides ample background for GMs and the adventure descriptions are plenty flavorful. The investigation section is particularly well-designed, forcing players to actively manage the attention their investigation has drawn even as they pursue answers. Characters with a diverse variety of skillsets and problem solving styles all have an opportunity to shine, whether by unearthing a key piece of information, deflecting curious onlookers, or diluting the rumor mill with false information. GMs are encouraged to reward player curiosity and ingenuity, truly making this feel like a player-driven inquest rather than a series of predetermined stops.

GM advice is consistently helpful without being pedantic. It’s clear that author Landon Winkler has put a good deal of thought —and play-testing!— into how characters might accidentally drive the adventure wildly off-track 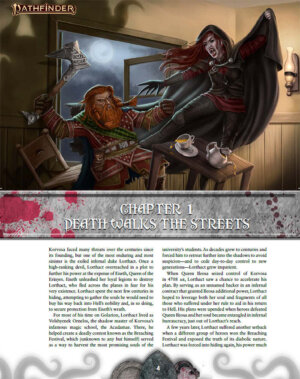 and has provided solid guidance in how and when to unobtrusively intervene. Although much of the advice is specific to the scenario, Winkler hits on a broader precept of the importance of reframing hardship to impart an authentic sense of earned success rather than simply punishing unlucky rolls; it’s a great piece of advice for newer GMs and a nice reminder even for those with experience under their belts.

The adventure culminates in a satisfying battle, complete with the opportunity for some verbal jabs. Should players succeed, the adventure concludes with several new potential plot hooks; should they fail, players and the city of Korvosa itself, are at the mercy of the GM.

One of the story’s best moments, however, is one that players may miss entirely. Upon receiving the Horn of the Sun Aurochs, characters can choose to repatriate the artifact with the city’s indigenous people who have largely been stripped of their relics. It’s a small moment to engage in an act of genuine good without expectation of reward (though, fear not! One most certainly exists) — with some added relevance to the ongoing real-world debate surrounding the question of who truly owns a culture’s art.

The book benefits from some truly excellent character art and some delightful full- and half-page spreads. Shadows at Sundown’s page design, however, does feel somewhat sparse. The layout remains print- and screen-friendly and the text is easy to read, but compared to some other recent titles, it feels somehow unfinished — though not for lack of polish. That said, the color scheme in play feels appropriately diabolical and the triple gravestones do add an air of dread. The text itself is well-written and well-edited, save for a single minor error that shouldn’t seriously impact comprehension.

Shadows at Sundown offers a mix of engaging gameplay styles and gives characters ample opportunities to standout. A stellar investigation section leads into compelling exploration and combat with the souls of the city at stake. This is an easy win for Pathfinder fans and a great addition to the game’s collection of adventures.

Abomination Vaults for 5E is Coming in October from Paizo Inc