Knights of Lastwall offers a deeper dive into its titular order, including insights into its history, culture, and everyday life for its members. Formed in the wake of a devasting tragedy brought on by the hubris of its predecessors, the Knights of Lastwall are especially welcoming to those looking to reinvent themselves, especially those working to overcome a less than sterling past. Because the order has been forced to rebuild from the ashes of its own mistakes, it takes care in offering the same opportunity to others.

While the Knights are certainly still a martial organization, deeply involved in the fight against evil and committed in their battle against the undead, the book stresses that not all characters within the organization’s ranks are fighters and that not all campaigns featuring these characters require an emphasis on combat. The Knights of Lastwall must contend with the need for fundraising, outreach, and recruiting, but also cooking, animal care, nutrition, and diplomacy; as such, “cooks, quartermasters, and stable hands” brim with as much possibility for players as the more traditionally combat-oriented archetypes. Likewise, the order’s crusade is not constrained to the grand evils of tyrannical leaders and their armies; “social evils,” such as bigotry, hatred, abuses of power, and even domestic abuse, are all treated as equally grave.

Abuse and survivorship are recurrent motifs in the book, always handled tastefully. Arazni, the former patron saint of the Knights of Ozem — the Knights’ of Lastwall’s ill-fated progenitors — was murdered, ripped back from the Great Beyond, held captive, and killed again only to ascend to full godhood as the deity of survivors, the abused, and those who will not let others dictate their fate. Patran Wardroxan, a member of the Dozen Roses faction, helps others to work through their scars, be they physical, emotional, or mental, in a healthy way. Knights who veer from the path of righteousness are offered the chance to confront their wrongdoing, make amends, and atone for their failings in a manner that is restorative, rehabilitative, and redemptive.

The Knights of Lostwall are a diverse organization, a fact highlighted by the profiles of its members and factions. Though many organizations offer membership to a variety of characters, the Knights of Lostwall exemplify the idea that there is room for everyone. While all are united in their dedication to the cause, their methodology can vary wildly. Many of the details in these sections help to add nuance and personality and offer GMs the potential for fun character moments with potentially heartbreaking callbacks.

One of the most interesting inclusions in the book involves the Knights’ relationship with religion. While all are welcome, even those who choose not to worship, the diversity of religious belief and practice has led to a kind of cross-pollination within the order. Knights have begun adopting and secularizing practices from across faiths and even creating their own pantheons. The inclusion of sacred sex feels somewhat out of left field, but again, it’s handled tastefully and without titillation.

Fans of the Magaambya will also be delighted to see the school and its teachers making cameo apperances throughout the text, as the Magaambyans are close allies of the Knights. GMs who enjoyed the atmosphere of Kindled Magic will find plenty of new challenges for the heroes of the Magaambya should they seek to aid the Knights in reclaiming the Gravelands.

Admittedly, Knights of Lastwall’s prose isn’t as immediately gripping as some of Paizo’s recent entries. The nondiegetic approach allows for a wide range of information to be introduced and explained, but it isn’t as compelling as Geb’s narration and commentary in Book of the Dead, though the irony of comparing the two isn’t lost on this reviewer. The drama of the order’s founding feels somewhat muted which, while a tall order for a source book, is a missed opportunity; even a few more in-world snippets from characters relaying the horror of the destruction or Arazni’s ascent into godhood would have helped to humanize the events.

The Knights of Lastwall are an intriguing option for those called to play characters righteously dedicated to a cause, but unbound by hard and fast rules. The diversity of the organization’s membership, as well as a recognition that many problems lack an easy answer, allows GMs to throw in thorny problems to challenge players to consider what it truly means to be a knight.

Sami Yuhas
Writer, gamer, and necromancer bard (at least in D&D). Sami focuses primarily on board and tabletop gaming, with a focus on sci-fi and fantasy, as well as worker-placements and co-op titles. She prides herself on the ability to overthink world building in games, and cites a three post manifesto on the costuming of XCOM 2 as among her greatest nerd achievements.
Latest posts by Sami Yuhas (see all)
Tags: Paizo, Pathfinder, Pathfinder Lost omens, Pathfinder Lost Omens Knights of Lastwall 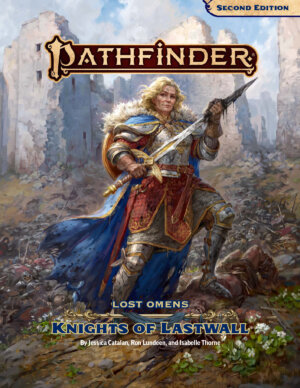 Knights of Lastwall offers everyone the chance to take up a knightly quest in a sourcebook that proclaims everyone can be a hero — even those running from a less than shining past.
7
Good