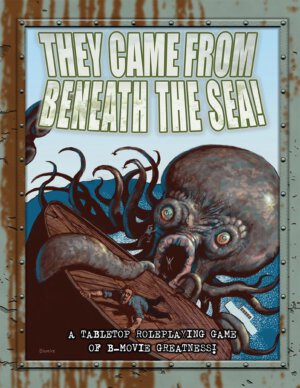 Title: They Came from Beneath the Sea!

They Came From Beneath the Sea relies on the tropes of 1950s and 1960s B-movies like The Creature from the Black Lagoon and The Horror of Party Beach to set the stage for either campy spectacle or gruesome horror. Though this seems like a strange blend of genres, Matthew Dawkins and his team have crafted a deeply enjoyable experience that is flexible enough to cater to a variety of tastes.

They Came From relies on the d10-based Storypath system. This means if players are familiar with Scion or either edition of Trinity, they’ve already learned most of the rules. Likewise, those familiar with its near cousin, Storyteller, will have little difficulty in picking up gameplay. 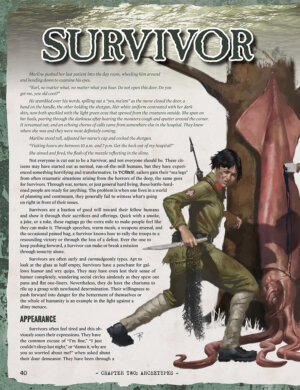 Characters are built from one of five archetypes commonly found in these films — Everyman, G-Man, Mouth, Scientist, or Survivor. Each comes with their own Trademarks and Tropes, as well as a specific set of path-related skills. Trademarks are a kind of specialized action that grant two additional dice on a roll, but can only be used once in a game. Tropes are specific benefits that are not limited in use.

Each archetype also has its own Nemesis class, granting character bonus rolls against a single enemy class.

Quips and Cinematics are new, line-specific mechanics within the They Came From series. Quips are pithy one-liners that, when dropped at the right moment, can grant players a bonus die on actions. These tend toward the sillier side of things, leaning into the B-movie camp or adding levity to an otherwise straighter take on horror. Cinematics are special powers that can be activated by the group. These abilities, ranging from a change of heart in an enemy to a “cheap set” that can be broken and re-purposed, are powered by the group’s total failed rolls, softening the blow of defeat.

They Came From demands a GM with a clear vision and players who share it. Those who want a straighter horror experience will have no trouble finding one in the established threats included in the core book while those who would prefer a more humorous meta-experience can find themselves likewise indulged. However, unless clear expectations are set as to what flavor a game might take, some players will no doubt be disappointed. It should also be noted that They Came From is a strong enough system to support a hybridized storytelling bent, but this will take some skill on the part of the GM, though Dawkins and his team have included no shortage of 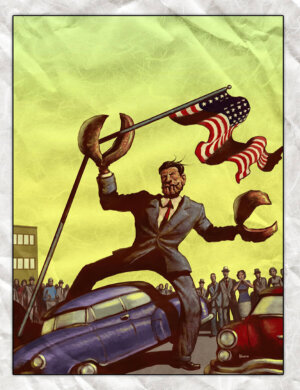 Despite its ostensible 1950s setting, They Came From is a history-optional game. Players and GMs can pick and choose what, if any, of the real world they’d like to take along inside. While the threat of “the Reds” may fun to play with for some —either as pastiche or paranoia— the very real xenophobia, racism, and sexism of the era are not a mandated inclusion for play. This, too, helps to move the game along the horror –camp spectrum.

They Came From Beneath the Sea features full-color art throughout. Cover artist Larry Blamire is an afficionado of the B genre and its influence is clear on his style. This does mean some of the art tends more toward the humorous than the horrifying, but it goes a long way in reinforcing the 1950s setting. The layout is clear and easy-to-read on a screen and, as with all modern Onyx Path PDFS, benefits from a hot-linked table of contents.

One expansion, Heroic Land-Dwellers, has already been released. Onyx Path has also chosen to support fan-made content for the game, releasing image, layout, and asset packs. A reference screen is also available for purchase.

They Came From Beneath the Sea is a fun and welcome addition to the tabletop gaming space. Drawing from a largely untapped body of reference, the game offers an enjoyable premise for those looking for something new. While the They Came From Beneath the Sea will more readily appeal to those who favor a lighter style of play, horror fans shouldn’t brush this one off on looks alone.

TGG REVIEW
9.5 TGG SCORE
10 VISITORS' SCORE (1 vote)
Summary
In They Came From Beneath the Sea, Matthew Dawkins and his team have crafted a deeply enjoyable experience that is flexible enough to cater to a variety of tastes. Dual-genre games are a fine needle to thread; tip too much in either direction, and you risk alienating half of your audience. They Came From Beneath the Sea —the first in a new line of games from Onyx Path— provides a stellar example of just how to go about it.
REVIEW SCORE
What people say... Leave your rating
Sort by: