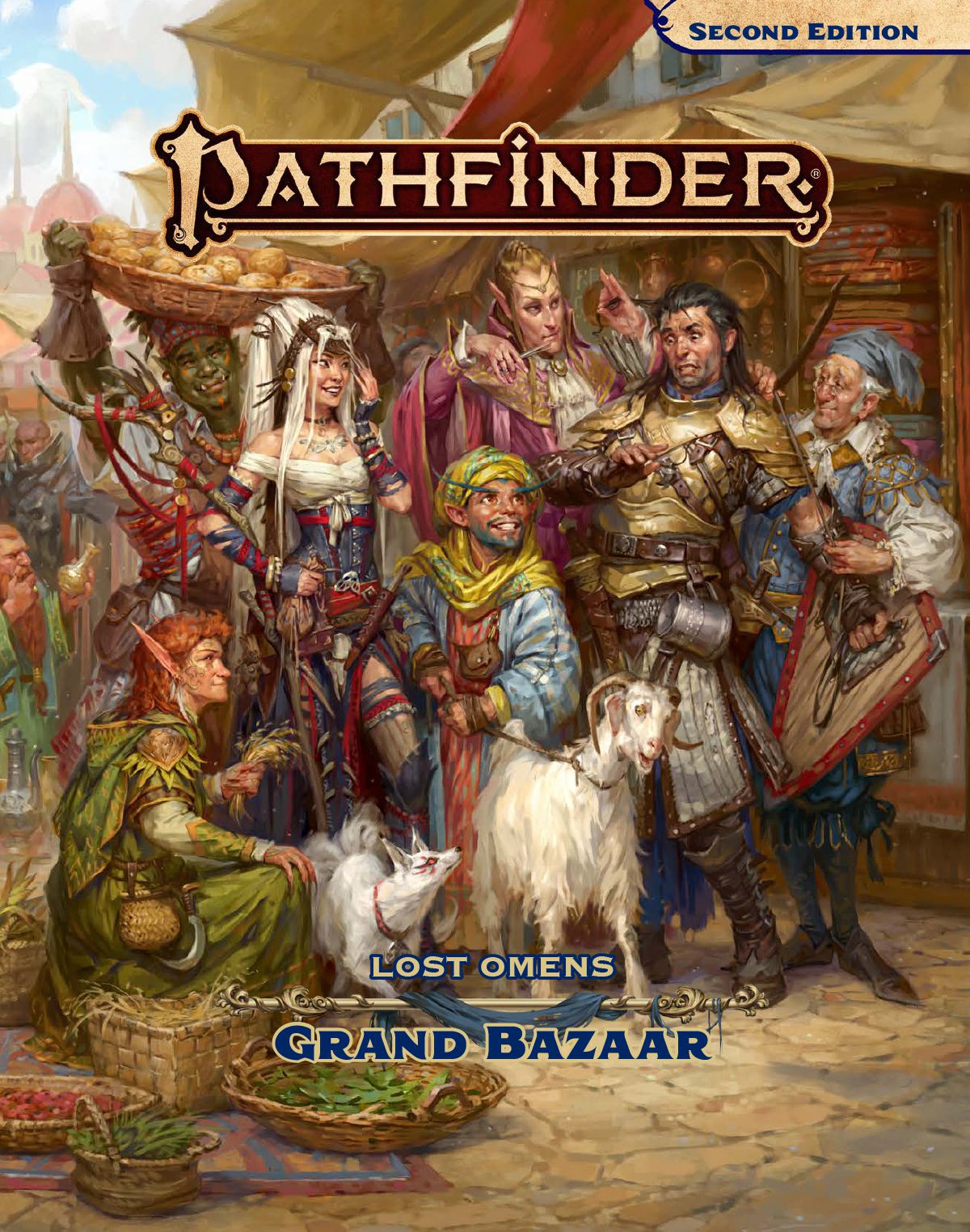 Lost Omens: Grand Bazaar offers the closest thing players and GMs can get to a stroll through Absalom’s famed marketplace, along with a treasure trove of new NPCs, items, and plot hooks.

Absalom’s famed Grand Bazaar is renowned for the variety of goods on offer. Whatever it is characters may find themselves in need of, it’s likely they’ll manage to find it if they wander the shops long enough. While the book does include more traditional fare, including gear for adventurers, hunters, and explorers, there’s no shortage of unexpected additions, including a sensory emporium, a toy store, a tattoo parlor, and the rare chance to take on a sentient poppet as an adventuring companion. Characters can also adopt a familiar with help from a tabby cat or seek out a literal transformation for body if not soul.

Mohren’s Mobility Apparel is a special standout, however. While Paizo’s dedication to diverse inclusion and representation has never been in doubt, it’s lovely to see a high fantasy shop dedicated to selling mobility and accessibility aids fit for adventuring. Magical hearing aids, reading rings, enchanted wheelchairs, and charmed prosthetics are all now officially part of Pathfinder canon. Characters with longstanding mobility or accessibility needs, such as those born with a limb difference or hearing difficulties, are free to begin their tale with any needed assistive equipment without suffering a penalty to their starting gold for having “purchased” the equipment. For players who benefit from these aids in real life, it’s a fun and affirming way to bring that to their characters’ experience, should they so choose.

The book’s plot hooks range from the serious (a shopkeeper unknowingly possessed by a malevolent force) to the silly (a spoiled nobleman willing to threaten children to win a card game). GMs will find ample inspiration for proper quests, such as warding off a sea monster that forced the venerable hunter Ayodele into retirement, as well as memorable, smaller outings, such as helping toymaker Ozi find homes for the stray children she has taken in. By delivering compelling NPCs, Lost Omens: Grand Bazaar affords players the chance to form connections with these characters and GMs the opportunity to use (or abuse!) those relationships over the course of a campaign.

Smart layout decisions connect shop and owner, forging a connection between the character and their business. Smaller inclusions of the shop itself and notable goods help to break up the text and keep readers engaged. On-screen reading presented no challenges, though the inclusion of hotlinks may help for those relying on the text in the middle of a game.

Lost Omens: Grand Bazaar is a delightful addition to any Pathfinder library. While GMs will likely find the book to be more immediately helpful than players, anyone who enjoys the setting’s lore or wishes they too could wander the streets of a fantastical bazaar will be charmed.

Sami Yuhas
Writer, gamer, and necromancer bard (at least in D&D). Sami focuses primarily on board and tabletop gaming, with a focus on sci-fi and fantasy, as well as worker-placements and co-op titles. She prides herself on the ability to overthink world building in games, and cites a three post manifesto on the costuming of XCOM 2 as among her greatest nerd achievements.
Latest posts by Sami Yuhas (see all)
Tags: Paizo Inc, Pathfinder, Pathfinder Lost Omens The Grand Bazaar 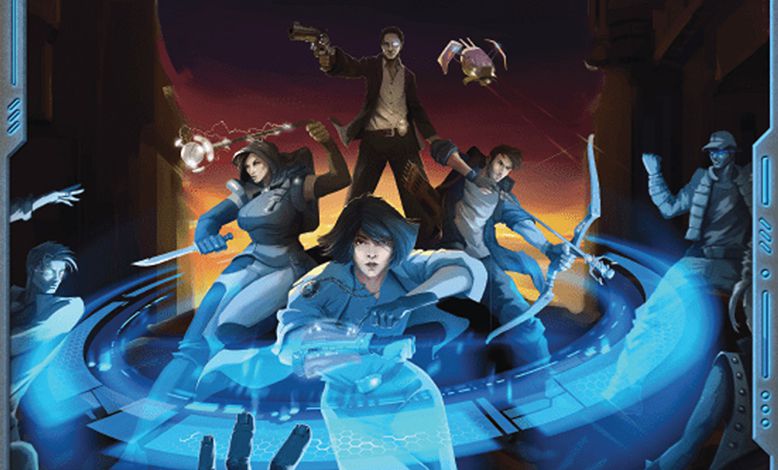 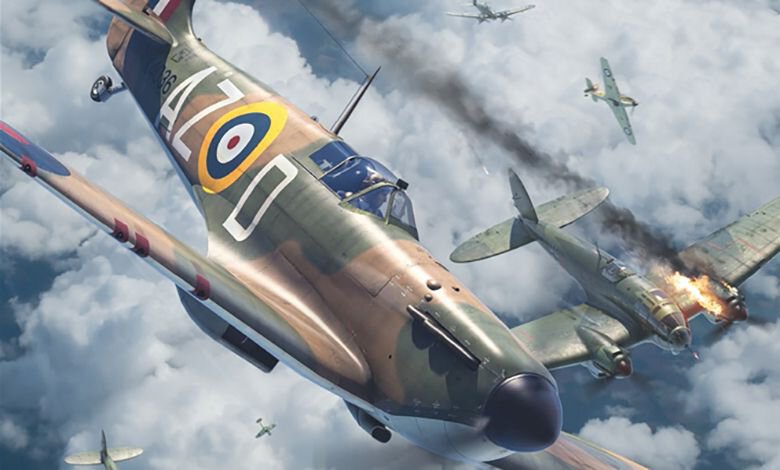 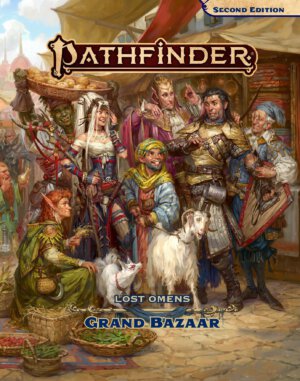 Much like its namesake, Lost Omens: Grand Bazaar offers surprise and delight at every turn, adding life and plenty of adventuring inspiration to Absalom’s famed shopping district.
8.5
Excellent 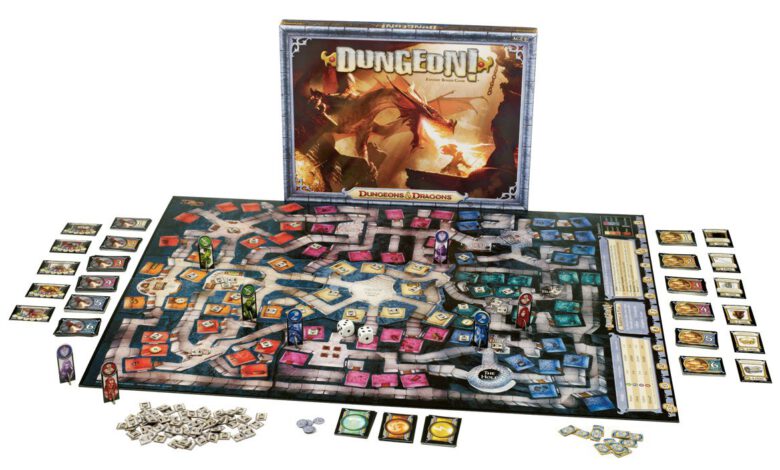