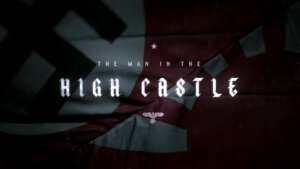 Title: The Man in the High Castle Pilot

These days it seems everyone in the streaming video business is scrambling to provide original content be it Netflix and its rapidly growing list of eye opening series (House of Cards, Orange is the New Black, and the upcoming Daredevil to name a few) to even Crackle getting in on the act with their movie Throwaways. While most streaming providers have simply gone forward making shows, specials, and films with the hopes their subscribers will be entertained, Amazon has taken a different route. Presenting what they like to call Pilot Season, Amazon reveals opening episodes of series viewers can vote on to determine if Amazon picks up the show and runs with it or tosses the program back into development hell. 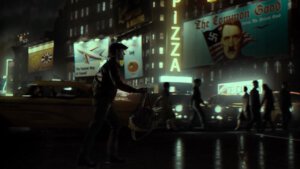 In the past Amazon rolled out some pretty less than stellar pilots and even produced some shows which I was shocked to see move beyond the voting phase. Their most notable standout has been Transparent, which has been a favorite of critics and even took home two Golden Globes. Rather than be left in Netflix’s dust Amazon has upped their ante for the 2015 Pilot Season. I’ll have to admit most of the shows currently up for voting don’t come across as must see tv but one program stands out above the rest and will surely be of interest to our readers: The Man in the High Castle.

For those who aren’t familiar with the Philip K. Dick classic, The Man in the High Castle is an alternate history novel in which the Axis forces stand triumphant over an occupied America. Rather than rehash the book in its entirety suffice to say the dominos begin to fall when FDR never enters the Oval Office; the botched Florida assassination plot of 1933 (in which Chicago mayor Anton Cermack was mortally wounded) succeeds and the following two U.S. presidents, who end up in the White House, turn out to be weak and vacillating men. America sticks to a firm policy of isolationism as England, the Soviet Union, and the rest of Europe falls. Thus the U.S. is without allies when the Axis eventually come calling. And they certainly aren’t selling Avon…

Amazon’s The Man in the High Castle opens with a film projector rolling as an eerily haunting rendition of Edelweiss plays while an American map flickers into view. I swear you’re never going to hear that Sound of Music song again in the same way! We see arrows, indicating Nazi invasion forces, encroaching just as the scene shifts to show icons of America such as Mount Rushmore, the Statue of Liberty, and an eagle with what no doubt is supposed to be invasion footage projected upon them. This dark intro really whets one’s appetite for what’s to come in the next hour. 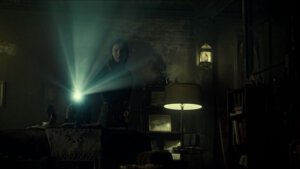 The viewer is dropped right into the mix with nothing along the lines of a backstory scroll or voiceover to set the scene. Personally I found this to be the right approach as much of the episode you’ll find yourself watching and listening for clues as to what’s taken place over the last fifteen years or so across this dystopian nightmare landscape. The tone of the pilot is dark and the look muddy and this also plays as a strength for The Man in the High Castle.

We’re introduced to the two main protagonists, Juliana Crain (Alexa Davalos) in San Francisco of the Japanese controlled Pacific States of America and Joe Blake (Luke Kleintank) from New York City (part of the Greater Nazi Reich) as they both make their separate ways to the Neutral Zone. Known as the Rocky Mountain States in the novel, the Neutral Zone is a swath of America spanning the Rocky Mountains although in the pilot one’s left with the impression this zone is a puppet of the Nazis as well. I’ll leave how and why Crain and Blake on enroute to this zone for the viewer to discover.

While the pilot isn’t slavish in retelling the novel’s story, there’s plenty here for fans of Dick’s tale to sink their teeth into. On the other hand, you don’t need any foreknowledge of the Hugo winning novel to find yourself drawn in. If you have any interest in alternate history, or even history in general, you’ll certainly be intrigued by the episode.

I just have a few minor quibbles with The Man in the High Castle, mainly stemming from fairly two dimensional characters. Granted Dick wasn’t known for great characters and dialogue; creating fascinating settings and situations was more his forte so I won’t fault the episode too much. The pilot is also a bit heavy on plot at the expense of character development but that happens to be the sin of most pilots, regardless of network or streaming provider, and when you’re effectively getting one sixty minute shot to garner viewer votes I can understand wanting to pack in as much story as possible. 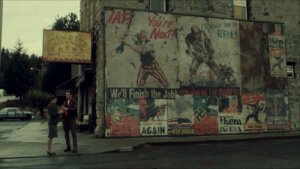 I’ll also point out the viewer is going to exposed to quite a lot of swastikas, Nazi uniforms and paraphernalia, references to atrocities committed and ongoing by both the Japanese and Germans, PG-13 graphic violence, as well as a sprinkling of f-bombs. The language and violence are probably the least of your worries as the grim and draconian depiction of an Axis controlled America is pretty unsettling. Not to say The Man in the High Castle isn’t for the most part fascinating but I’m sure there are folks out there who’ll find it very uncomfortable to watch. Or not want to watch the pilot at all and that’s certainly understandable.

Ridley Scott has spent a lot of time trying to dramatize The Man in the High Castle, first at the BBC and then with SyFy, to no avail. With the current pilot leading all contenders by a wide margin with a rating score of 4.8 out of five it looks as if Amazon should green light the series, with Scott as executive producer, as long as they want to fork over the production budget. I for one hope this does become a series since we don’t see much alternative history hit big or small screens (I suppose some would count Doctor Who as an example but I consider that to be straight SF) and this makes for an interesting, if unsettling, premise.

As for who is than man in that high castle? I’ll leave that for the viewers to find out.

I just have a few minor quibbles with The Man in the High Castle, mainly stemming from fairly two dimensional characters. Granted Dick wasn’t known for great characters and dialogue; creating fascinating settings and situations was more his forte so I won’t fault the episode too much.