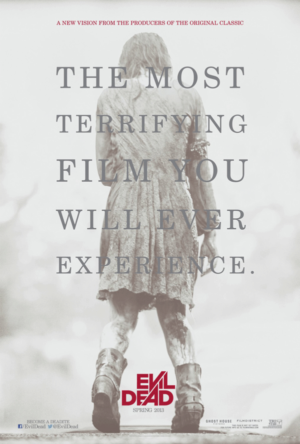 Studio synopsis: Five friends head to a remote cabin, where the discovery of a Book of the Dead leads them to unwittingly summon up demons living in the nearby woods. The evil presence possesses them until only one is left to fight for survival.

Readers will be surprised to learn I’m not much of a horror movie fan. This may come as a shock since I’m a huge fan of all things Lovecraftian, ran an RPG (Call of Cthulhu) for nearly two decades and consider the first time I sat down in a theater to see John Carpenter’s The Thing as one of my penultimate moments of high school movie memories. Yet over the last decade or so it seems as if the horror genre, for the most part, has mainly sunk to the near level of snuff porn with the release of more and more films which seemingly take great pleasure in coming from a downright nasty and antisocial mindset – Human Centipede anyone? 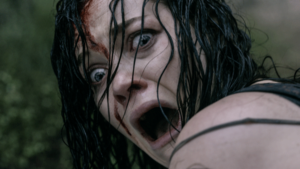 This isn’t to say there aren’t plenty of gross out moments in the new version of Evil Dead, as there are lots, but the filmmakers have set out to provide a movie experience which not only brings the scares at a frantic pace but also takes great joy in the entire genre itself. In my opinion horror movies should either come from one of two directions: As thrill rides full of spooks and shocks or as a serious attempt at presenting a decipherable message. That message shouldn’t necessarily be presenting horrific images and concepts simply to anger or revolt. This is just my opinion of course.

As usual, I’ll stick to a spoiler free approach to Evil Dead.

We’ve seen plenty of horror remakes over the past few years and some have stood out as solid flicks in their own right – Dawn of the Dead is a great example – while others  feel as if they simply exist as quick money grabs aimed at a the opening weekend box office and fading from memory within a couple of weeks. Seriously, do we really need another remake of Carrie? Thankfully Evil Dead has legs and, while some fans of the Sam Raimi franchise may find the remake doesn’t meet their expectations, the film mainly succeeds as a reimagining of the 1981 cult classic.

For the 2013 version of the film original director Raimi and star Bruce Campbell have passed the baton to co-writer/director Fede Alvarez and a cast of mainly unknowns to bring the Evil Dead experience to a new generation of movie goers while maintaining much of the overall vibe which have made the series a classic of cult spatterfests. While watching the movie you can see Alvarez is having fun with his version of the cabin in the woods tale while also providing longtime fans with subtle – and sometimes not so subtle – references to the original. Although Raimi and Campbell are credited as producers one gets the feeling their influence is present in nearly every scene; something which normally isn’t the case with most film’s producers.

As for the story setup we find Mia (Jane Levy) traveling to her family’s cabin in the hopes of kicking her heroin addiction once and for all. Along for the ride are Mia’s estranged brother David (Shiloh Fernandez), David’s girlfriend Natalie (Elizabeth Blackmore), a nurse named Olivia (Jessica Lucas), and underemployed teacher Eric (Lou Taylor Pucci). Everyone’s pals – at least on the surface – and the group has banded together in order to save Mia from her addiction, even if it kills them. 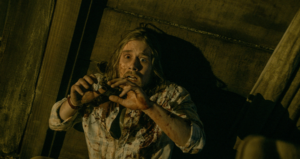 Yet these aren’t a bunch of meddling kids, and they don’t pull up to the door of the cabin in the Mystery Machine, so we know things are going to go badly. As a helpful hint to the reader, if you find yourself confronted by a book bound in human flesh wrapped in barbed wire it’s probably a good idea to leave the tome right were you found it and skedaddle! That’s my public service announcement for the day…

As Mia succumbs to the DTs, and her sanity begins to slip, Eric ignores all the warnings scrawled within the bizarre book and accidentally unleashes a demon which makes an already bad situation way, way worse. Madness and mayhem is now on the menu so the cabin and the surrounding woods soon become a killing ground. While the movie maintains an ever growing sense of dread right from the start, the introduction of the demonic entity soon plunges the audience into a roller coaster ride of blood and guts.

The cast for the most part does a nice job, although Fernandez comes across as a bit flat, while Levy provides a fantastic turn as a woman transformed from a manipulative drug addict into a terrifying hellspawn bent on death and destruction. Alvarez skillfully directs the proceedings with style – although some of the exposition is clunky at best – while replacing the no budget feel of the original with the obvious polish more money can provide. It’s interesting Alvarez passes on using much CGI as a great number of effects are created through makeup and more traditional applications. The splatter seems to take on a heightened punch to the gut reaction from the audience since a lot of the grue doesn’t carry the same the falseness of computer effects.

Since we’re talking about the gore let me say Evil Dead has to be the most graphically violent R rated film I think I’ve ever seen. As mentioned at the beginning I’m not much for gruesomeness for the sake of just a gross out. Yet here’s shocks and horror presented to push the envelope of good taste (and many times shreds that envelope) but done in a much different way than other splatter films whose use of blood and guts are meant to invoke a sense of disgust or anger in the viewer. Evil Dead never takes itself too seriously and many times you follow up your initial shock with a chuckle at yourself for jumping a little out of your seat. There’s also plenty of black humor within Evil Dead, awfully black in fact, and it’s apparent everyone involved in making the movie is having a hell of a good time and that translates to the audience as well.

Truth is Evil Dead of 2013 is very similar to the 1981 film in a lot of regards even though the execution is as different as night and day. Both films are E-ticket rides through a nightmare scenario which are sure to please fans of the horror genre. This new version may disappoint some longtime fans but the series receives a well needed jolt for relaunch with one of the best horror movies of the last few years.

On a final note, don’t leave the theater before the end of the credits because there’s a cameo which is sure to please folks who’ve been following the Dead series since the beginning.

Truth is Evil Dead of 2013 is very similar to the 1981 film in a lot of regards even though the execution is as different as night and day. Both films are E-ticket rides through a nightmare scenario which are sure to please fans of the horror genre.