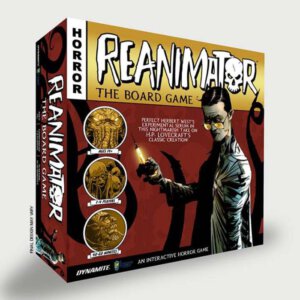 Title: Reanimator: The Board Game

Genre: Adventure game based on the cult classic film and Dynamite comic series

04:20 News of the day
18:40 What’s cooking on the show this week
23:30 Reanimator: The Board Game reviewed
TGG REVIEW
7 TGG SCORE
0 VISITORS' SCORE (0 votes)
Summary
While it's not a great game, or a must own by any stretch, I found Reanimator to be a fun experience. The mechanics are pretty light and easy to explain in just a few minutes but there is a lot of randomness which some players won't care for; you have to roll with the cards drawn rather than put together an overall strategy to win. If you're a fan of Lovecraftian games or the Reanimator franchise you'll be more apt to like the game.
REVIEW SCORE
What people say... Leave your rating
Sort by:

Dynamite Entertainment Comics for May 25th, 2022

Dynamite Entertainment Comics for May 18th, 2022