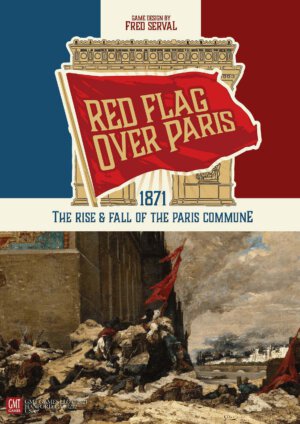 Players: One or two players

I share my thoughts about the two player strategy game Red Flag Over Paris from GMT Games. The game recreates the tension of the Paris Commune following the Franco-Prussian War. Plus the latest tabletop gaming news from Bundle of Holding, Capstone Games, Chaosium Inc, Gallant Knight Games, Ulisses Spiele, Skybound Games, and more.

6:41 Tabletop gaming news of the day
30:30 March review notes
32:52 Diving into Red Flag Over Paris
54:15 Final thoughts and review score
1:00:51 Wrapping up
TGG REVIEW
8.5 TGG SCORE
0 VISITORS' SCORE (0 votes)
Summary
Red Flag Over Paris is a very well presented and is an entertaining tug of war for the two players. I appreciate the new wrinkles in gameplay compared to Fort Sumter and believe they lead to a fuller gaming experience. This new release also makes for a great gateway title into historical gaming.
REVIEW SCORE
What people say... Leave your rating
Sort by:

Your password reset link appears to be invalid or expired.