Returning Across the 38th Parallel – Next War: Korea Reviewed 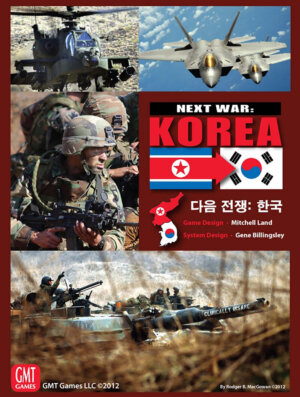 Playing Time: One to five hours

Much has been discussed in the geopolitical world that the most obvious location for the next major conflict is more than likely Korea. I can’t say I particularly agree with these assessments seeing I think it’s mighty tough to field a truly combat ready fighting force when it’s made up of a great many people who seemingly subsist on tree bark, but if such a war could break out Next War: Korea does an excellent job of prophesying just what may happen.

The reality upon delving into Next War: Korea (or NWK) is you’re getting three games and each is substantially different than the others. First you have the standard game which is more or less a traditional strategic level wargame while the advanced game builds upon the standard while adding many new options and even changes to the mechanics and gameplay and flow of the standard. The third game is an air war only simulation.

Component quality is what we’ve come to expect from GMT with a variety of counters, play aids, two rule books and baggies to sort everything. One glaring item that really bears mention, and truth be told I was shocked to see, is paper maps – albeit very nicely finished paper maps – in a GMT title carrying an $85 price tag. I can see this happening with a $50 dollar game but at NWK’s price point, and with such an great design, I can’t see how we didn’t get a mounted board. 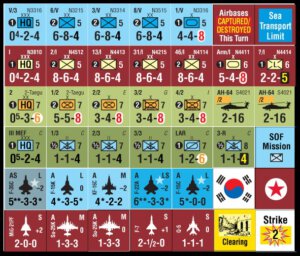 The scale of NWK is from battalion to army size for the ground units with each hex covering approximately seven and a half miles. Turns represent somewhere in the vicinity of three and a half days so two turns equal a week of game time. Counters are clear and uncluttered while most carry the standard NATO symbols for identification. Ground units mainly indicate attack, defense, and movement as well as other factors and air units show combat support, range, and other factors that may come into play. Overall the counters look exactly like what any gamer, regardless if they’re a wargamer or not, has seen for thirty years or so. I’m not saying this is a bad thing, just that we’re looking at fairly traditional counter designs.

The standard game is comprised of seven scenarios and most utilize a single map with a tendency to keep the unit count fairly low. Most of these can be completed in a couple hours or less and comprise a nice solid, if somewhat unspectacular, experience. Or, in other words, a diehard grognard will have fun with the standard game but once they’ve got their head around the basics will want to move on the advanced game as soon as possible. Less experienced players should find the standard game enough of a challenge in and of itself.

The standard game turn is broken down into the following phases:

The standard game tackles air and sea power in a very abstracted way while the advanced game ups the ante and actual counters are introduced to represent the various air squadrons available. Combat is based upon traditional attack strength versus defense strength ratio and step reduction of flipping counters to their reduced side takes place when incurring losses. Air units can aid in combat rolls while naval bombardment can help the attacker as well.

A sprinkling of other rules come into play during the standard game such as snipers, air superiority, control of the sea, and so on but nothing which pushes the game above an average (or possibly slightly above average) complexity in my opinion. 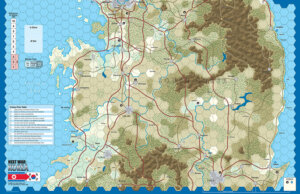 While the standard game is fun and should appeal to plenty of gamers, especially those who are tight on time, the advanced game is really where the game shines best. The advanced game has four scenarios and plays much differently than the standard game. Many new rules are introduced as well as new turn phases. Supply becomes a much larger issue, special forces become more special, headquarters exert influence on subordinate units, and – as noted previously – the air war plays a much larger and more detailed role with a variety of aircraft and missile types modeled. In the advanced game the conflict takes on a much more epic feel and quite a few optional rules are available although it’s important to point out the complexity level gets ratcheted quite a bit.

All in all the advanced game is a completely different beast entirely from the standard game. Plenty of optional rues are available in the advanced game as well such as U.S. readiness, DPNK Nukes, Japanese ground forces, and so on. These optional rules can add quite a few wrinkles both large and small.

The air war game plays closely along the lines of the advanced game only with the exclusion of worrying about ground forces. I honestly can’t say I did much more than kick the tires as, although it’s a welcome addition, I don’t see the air war aspect being the main selling point of NWK.

I have to say I like Next War: Korea but there are some minor problems.

To begin, I found the game specific rulebook for NWK (keep in mind there are two rulebooks: one for the system and one for this title) to be a bit confusing and not the most intuitive for the reader. Many of the rules for the standard and advanced game are mixed together as opposed to being broken into two distinct sections and it leads one to lose focus as to what goes where when learning to play the game. Even though it would lead to a higher page count I believe the standard and advanced games should each had a section devoted to them as opposed to the mash up as the book currently stands.

Also some of the rules seemingly contradict themselves which can lead to more confusion. Luckily, GMT is a firm believer in “living rules” and I know a new edition of the rules, as well as player charts, are available online so not a huge issue here but it bears mentioning. Speaking of player charts there are quite a few but only one copy of each so you’ll have to share. Also of note, although you’re playing to achieve a victory point level, and you check each turn to see if either player has reached the required total, there isn’t a tracker for VPs.

Lastly, there’s the issue of the paper maps. Sure, I know the Stones sang “you can’t always get what you want” but I still feel, for a title that will run someone over four Jacksons, there really should have been mounted maps. I know for people who are going to dig the system (and play the heck out of it) those paper maps are going to see a lot of wear and tear.

In my opinion the game looks to simulate the potential conflict realistically as neither the North Korean nor US/RSK player is going to have a cake walk: North Korea doesn’t have the technology to quickly and effectively eliminate opposition while the US/RSK doesn’t possess the initial strength in numbers to stem the attacking tide or survive a long grind. All in all Next War: Korea is an interesting system and will strongly appeal to gamers who are interested in modern combat, especially what conceivably could go down if the North Koreans ever decided to move beyond their tradition of saber rattling.

TGG REVIEW
7 TGG SCORE
0 VISITORS' SCORE (0 votes)
Summary
All in all Next War: Korea is an interesting system and will strongly appeal to gamers who are interested in modern combat, especially what conceivably could go down if the North Koreans ever decided to move beyond their tradition of saber rattling. I just found it to be a rather daunting design and it left me feeling a wee bit cold as far as wanting to play the game multiple times.
REVIEW SCORE
What people say... Leave your rating
Sort by: