This was my first foray into the depths of the Living Card Game format touted by FFG.  In essence, this means that you can play the game as bought, and there are expansions to the game that you can purchase to get more cards.  The difference between a living card game and a collectible card game, is that when you purchase an expansion pack for the living card games you know exactly what cards you are going to get.  So there is no need to purchase 50 booster packs to find the one card you were looking for.  If you want the elves deck, you go out and buy the elves deck.

The box comes with plenty of air, so you have lots of room for expansion decks.  It would have been nice if they included an insert to help you hold these future decks but alas you’ll have to fend for yourself.  Inside with all the air, you’ll find a stack of cards and 4 small boards, plus some tokens.  The quality and artwork of the components is excellent, as is expected from FFG.

The rulebook is, as is also expected, long and complicated.  However, if you can work your way through it and play a few times you will find that it is really not a complicated game at all.  In fact, the game is a lot of fun.  One hint:  The decks do not come pre-sorted in their little cellophane wrappings.  they look like they do, but upon closer inspection you’ll find that you need to sort each one out for yourself the first time you play.  so don’t think you can be lazy.

The Warhammer theme and feeling is definitely there.  If you are a Warhammer fan, you’ll feel right at home.  If you aren’t, you’ll still feel immersed in battle in a rich fantasy realm.   I personally would have preferred a World of Warcraft themed version, but hey what do I know?

Each player selects a faction, in the core set this includes either the Dwarves, Orcs, Chaos, or Empire factions.  There are more you can get later if so inclined.  They each select their appropriate game board and deck, and play begins.

The object is to set 2 sides of your opponent’s Capital burning.  The board is your Capital and 3 of the sides are used for different actions and can be attacked. If a side takes 8 points of damage, it is set ablaze.

The Kingdom side is where you gain your resources by placing various cards there.  you need resources to play additional cards, especially if you want to get the good stuff on the board.  The quest side is where you send your troops out on quests, which can help you in the game.  It also determines how many cards you get to draw each turn.  The battlefield is the front side of your Capital board, and this is where you place your minions in order to attack the enemy.

Each turn you draw cards, buy resources, and attack your opponent until one of the Capitals goes down in flames.  That’s all there is to it.  These is a fair amount of strategy involved and each card or unit has their own unique powers and strength of course.  So it will take a while to learn the abilities of your foe and how to best defeat him.

It is a fun game for two players if you are OK with getting a few games under your belt in order to get the hang of it.  Fans of CCG’s should have no problem.  You can even construct your own custom deck once you know the cards well enough and there are cards to run a draft option as well. Dungeons & Dragons: Keys from the Golden Vault is Available for Preorder 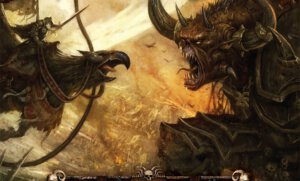 It is a fun game for two players if you are OK with getting a few games under your belt in order to get the hang of it. Fans of CCG's should have no problem. You can even construct your own custom deck once you know the cards well enough and there are cards to run a draft option as well.
8
Good

Elliott MillerThanks for the kind words all. It really doesn't seem like it would be to difficult to adapt to additional players. I'm thinking about doing a test run with 3 or 4 players and a few house rules to see how it plays out. The one question that weighs on me is what do you do when you get down to 2 players (after eliminating the other two) and they are on the same side? Can dwarves fight elves? Can chaos fight orcs? Logistically sure, but what about morally and keeping in theme? Which leads to the question, is a 3 player game feasible? Wouldn't two same side factions gang up on the opposing faction, wipe them out, then just fight each other? Hmmmmm....Much to ponder. Any ideas?...

FeldaanMy one wish for this game is that there was an official 3-4 player option. Especially now that Assault on Ulthuan added another 2 races, I'd really like to be able to play this on my normal gaming nights but with support for only two players, it just isn't happening....

Jan Tahon (Barad TheA good review of a good game. Though I only played it once and it was completly in german and being explained by germans so it wasn't that easy. But I liked it and I been thinking of being the game myself. I can totally find myself in you're opinion, nice to learn that there isn't a 3 to 4 player option at the moment. That's rather boring and would be easy enough to do. Like the site by the way....

TonyCliftonWe just played this for the first time the other night. I'm pretty much a wargamer and although I've played (and hated) a few card games I have to say I liked this one a lot. Easy to teach and easy to play. Once you are familiar with the cards in your deck the game moves pretty quickly. I'd recommend this....

DeePeeGood review. I like it how you include complete content pictures in these reviews. The reviews in general are good too, but they could be a tad longer and more clearly structured. I'm just nitpicking though, good work!...