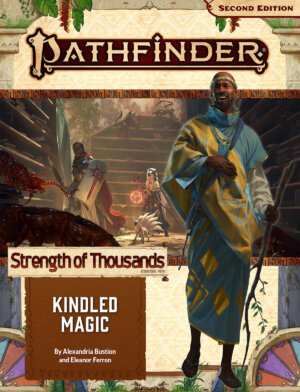 In Kindled Magic, players take on the role of new students at the Magaambya, the greatest magic school in all Golarion. As new initiates, they must complete a period of public service for the school before progressing in their training. Trouble soon stirs, however, as unusually active insects portend a far greater threat than a few bugs.

By its sheer genre conventions, Kindled Magic is not a typical Pathfinder adventure. While there is combat, players will find far greater opportunities for character advancement in solving mysteries, befriending fellow students, earning the trust of teachers, and finding clever solutions to thorny threats. The Magaambya emphasizes imagination, camaraderie, adaptability, valor, and knowledge and this value system permeates the design of the entire adventure. The cast of NPCs is vibrant and diverse — so much so that authors Alexandria Bustion and Eleanor Ferron actually advocate having players take on NPC roles in addition to their characters. The ability to learn, explore, and forge relationships are the core elements of this adventure and their skillful handling makes this a delight. The details here truly sell the setting, from the student’s room filled with “wooden practice weapons, old scrolls, impressive but magically inert knickknacks and a stuffed lizard” to spellskeins who “are nevertheless protective of the students” but still might “[steal] the occasional unattended kerchief.”

The Magaambya feels vibrant and alive. The supplemental sections on “Life in the Academy” and “Students of the Magaambya” help flesh the location and its inhabitants out and provide strong hooks for players and GMs alike. The material contained in those subsections alone is enough to run a separate sandbox style campaign where players advance their students at a more leisurely place and where the emphasis remains on the school life aspects. 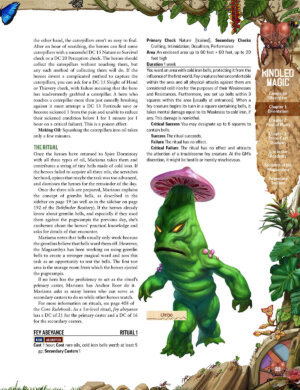 There’s a sense of palpable delight in Kindred Magic, an invitation for players to step in and savor the wonder of discovery and the joy of goodhearted mischief. When the challenge is to find, purchase and safely transport delicate chicks from the market back to the school or to peacefully remove an infestation of gremlins, there is a potential for real delight in the storytelling and roleplaying aspects and in interacting with the world itself. All the same, Bustion and Ferron still manage to drop hints that something strange is afoot for those observant enough to notice or curious enough to go seeking.

The art is, as always with Pathfinder, beautifully rendered and, in this case in particular, thoughtfully conceived. There’s a clear African influence to the page borders as well as to the full page spread detailing Old Mage Jatembe, but it feels like a respectful homage rather than a crass imitation.

While combat does feature in the adventure, its emphasis on relationship building, problem solving, and student life means that Kindled Magic is a solid entry point for players curious about the hobby, but who would prefer a more character-driven plot. Likewise, it’s a natural fit for those who already appreciate the hallmarks of the magic school genre or players looking for a distinctly non-eurocentric approach. Conversely, for players interested in meaty, strategic combat, this adventure might be one to bypass. GMs interested in constructing a school-based experience, regardless of system or setting, would do well to read through and note which elements help to really drive home the experience and how to port them back into their own games.

While bigger things are most definitely on the horizon, Kindled Magic is an adventure packed with delight and discovery, allowing players to fully immerse themselves as students in a wondrous and fantastical setting. The campaign and its supplemental materials are rich enough to spin off into their own longform schooling series or to inspire GMS in creating their own. The adventure’s explicit direction to reward creative problem solving encourages players to approach in-game challenges and obstacles with curiosity rather than simple brute force and helps integrate the Magaambya’s five core virtues —imagination, camaraderie, adaptability, valor, and knowledge—into the fabric of the gaming experience itself, making this a strong contender for fans of the genre.

TGG REVIEW
9 TGG SCORE
8.4 VISITORS' SCORE (4 votes)
Summary
Kindled Magic frees the well-trodden and much-loved “magic school” adventure from its Eurocentric trappings to deliver a tale of warmth and curiosity as the opening act to a dangerous conflict.
REVIEW SCORE
What people say... Leave your rating
Sort by: