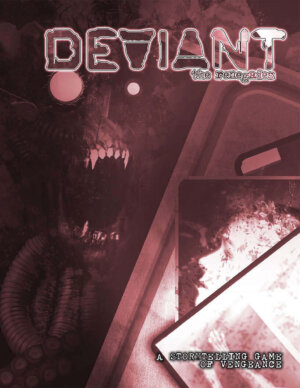 MSRP: Hardcover corebook on the horizon for $55.00 or get the PDF right now from DriveThruRPG for $24.99

Deviant: the Renegades makes its long-awaited debut, joining the Chronicles of Darkness line with a game of a very different kind of horror.

Rather than a fresh take on a particular kind of fantasy creature (vampire, werewolf, mummy, etc.), Deviant

explores a particular trope: that of the ordinary person transformed by magic or science into something else, a victim —willing or otherwise— of an experiment gone horribly right.

Many Chronicles of Darkness fans got their first real taste of what Deviants would bring to the table with Dark Eras 2 or Contagion Chronicles; however, without the core book or a previous first edition to refer to, the experience was fundamentally incomplete for everyone except Kickstarter backers. Subsequent companion books did little to add detail. It’s only now that players at large have the opportunity to truly see what’s in store.

Deviant is a heavy game, even by the typical Chronicles of Darkness standards. Whether the Remade are loyal to the Conspiracies responsible for their creation or locked in a desperate struggle against them, the scars of their transformations are ever-present; great power, it seems, bears a terrible cost.

Deviant’s storytelling chapter calls attention to many of the real world horrors the game explores, including Post-Traumatic Stress Disorder and mental illness, housing instability and homelessness, and the challenges that come with navigating a world that is fundamentally hostile to your existence. Psychological abuse and manipulation, gaslighting, and medical abuse are real possibilities. While the text is thoughtful in its treatment and inclusion of these issues, there is a real need for players and GMs to come together and discuss any topics that may be too sensitive or may otherwise be too upsetting.

That said, like many Chronicles of Darkness games, Deviant supports a variety of narratives styles. While tales of shadowy conspiracies and revenge are obvious options, there are also tales to be told of mending broken lives, of finding community, and of enacting righteous justice. These possibilities expand even further when bringing Deviant into a crossover setting, such as The Contagion Chronicles or Dark Eras.

Mechanically, the game falls in line with what fans have come to expect from Chronicles of Darkness, though character creation does feel somewhat crunchier. Variations (or powers) must be entangled with Scars, the mechanical cost of having been remade. Scars fall into one of three broad categories (Controlled, Involuntary, or Persistent) and a single scar may be linked to multiple Variations. It’s a wonderful tool for players to customize their characters in ways that feel truly unique, but it can also be a lift for newcomers and GMs. The game is a perfect example of when a more robust character sheet comes in handy, as there is a substantial bit of information to keep track of over the course of play. 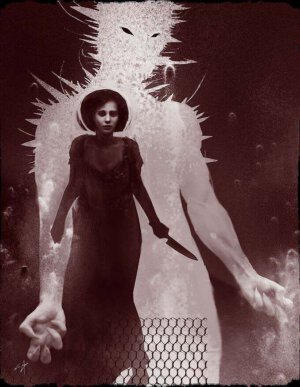 Deviant’s art is highly thematic, which means it also tends be deeply uncomfortable. Those familiar with Sam Araya’s work from Arc Dream’s The King In Yellow will no doubt recognize his contributions here. Medical imagery abounds, violence is prevalent, and there is at least one graphic —if bloodless— depiction of torture. The sample character art highlights the variety of forms Deviants can take and offers plenty of inspiration for players. Layout is typically clean and easy to read, though when first creating a character, the printed text may have some advantage over the PDF in terms of easy cross-referencing.

Deviant won’t be a game for everyone, especially those who prefer some escapism at their tables. Its horror tends to lie much closer to the evils of reality, often revolving around systemic abuses of power with horrific consequences for those caught in the crosshairs. For those familiar with medical, psychiatric, or even the seedier side of American history, there exists the potential for unsettling parallels. Though the text isn’t exploitive, it does not shy away from its core concepts.

That does not, however, mean it is in any way a bad game. Deviant offers exciting new possibilities for storytelling within Chronicles of Darkness, taking notes from Demon’s espionage and Changeling’s heroes on the run and creating something wholly new within the line.

If this is the final new splat to ever grace the Chronicles of Darkness, Deviant: The Renegades is one hell of a sendoff. Dark, compelling, and ready to play nicely (or not-so-nicely!) with the other splats, it’s a fantastic, if decidedly adult experience.

TGG REVIEW
8.5 TGG SCORE
0 VISITORS' SCORE (0 votes)
Summary
Deviant won’t be a game for everyone, especially those who prefer some escapism at their tables. Its horror tends to lie much closer to the evils of reality, often revolving around systemic abuses of power with horrific consequences for those caught in the crosshairs. That does not, however, mean it is in any way a bad game. Deviant offers exciting new possibilities for storytelling within Chronicles of Darkness, taking notes from Demon’s espionage and Changeling’s heroes on the run and creating something wholly new within the line.
REVIEW SCORE
What people say... Leave your rating
Sort by:

They Came from Karnstein’s Cabinet of Curiosities! is out in PDF

First Look at Monsters of the Wilderness: Oswald’s Curse on The Gaming Gang Dispatch #783

Heroes in a World of Horror! Arrives in Print and PDF from Onyx Path Publishing