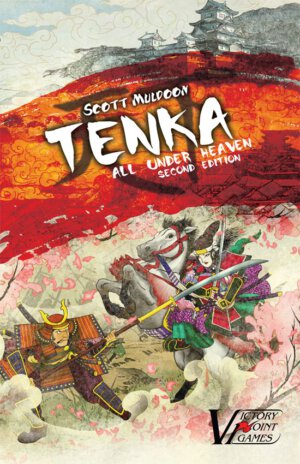 This review is for the Boxed Version.

Tenka is a “take that” card game and a fun one at that. You’ll be recruiting Samurai to build up your army in order to take other player’s cards, if you’re the winner of battles. Adding Lords to your court to make sure you have the most nobles. By having the most Lords you may take one additional Action on your turn. You’ll also look towards having the most Priests in your court so you’ll be able to draw one additional card and hold one extra during that turn. If you increase the number of Provinces you control, and if they are equal to or greater than the Stability number, you win. Wait, you also need to have more than the other players. 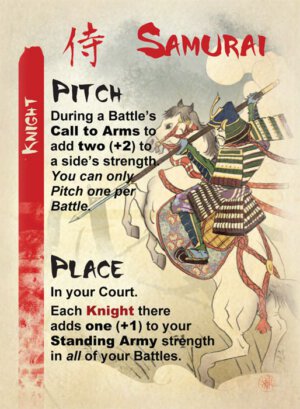 Each player is dealt eight cards and picks three to place in their court to begin the game. No, sorry, you can’t pick the Special cards at the start. The game play is simple but there are a few strategies to work with but I won’t provide spoilers here. During your turn you 1) Check for Province Victory, 2) Draw one card, 3) Take one action.

At the start of your turn, when you check for Province Victory, if you have the required number of Province cards you win the game. The Stability Tracker starts at five and goes down by one each time the draw deck runs out. In this way the game will end no matter what happens between the players. With thirteen cards of each type you’ll be going through the deck quickly. I played one game where a lot of back forth happened and without the countdown of the Stability Tracker we could’ve been there for a while. Next you’ll draw one card which is simple enough. Don’t forget about the Priests and check those Special cards which allow you to draw even more cards. Finally you’ll take one action. 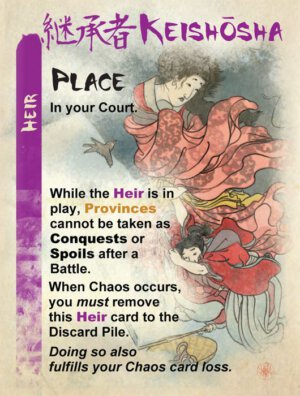 Of course keep an eye on your Lord cards that allow you take more actions. Yep, you got it! Some of the Special cards provide additional actions. Those actions are: Pass, Pitch, Place, and Battle. Pass is just that as you do nothing on your turn; a viable move that keeps the other players guessing. Pitch is when you put a card into the discard pile. Place is, well, placing a card from your hand into your court. This is where you get to increase the number of your Lords, Priests, Samurai and Provinces. Gather up your Samurai and you can go into Battle! Ask your neighbors if they’d be willing to lend some of their Samurai to make sure you’re victorious. Spoils go to the victor when you’re the attacker. As the defender you just held the attacker off and get no rewards (cards). You won’t worry about remembering what each card does since the instructions are on them.

I will point out the only real issue I have with the game is the card stock; it’s quite thin and more paperish than standard playing cards.

Every time I’ve played, Tenka’s been enjoyable. The player interaction is always there and you need to pay attention during everyone’s turn. The strategies change with each card placed and keeps you on your toes. Regardless if this is an 80 card deck this game will be going with me everywhere …even on non- gaming days. 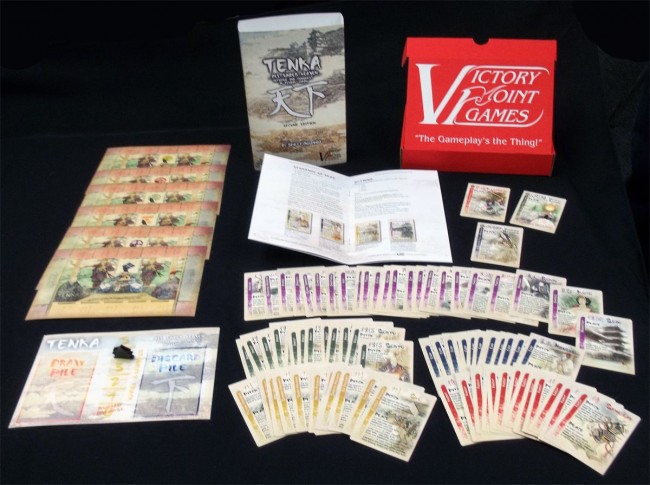 Every time I’ve played, Tenka’s been enjoyable. The player interaction is always there and you need to pay attention during everyone’s turn. The strategies change with each card placed and keeps you on your toes.

Chris Ayala has been a gamer most of his life. The first game system (Odyssey) he played used translucent plastic overlays that stuck to the TV screen. From the NES to the Wii he hasn’t stopped enjoying the games. Three years ago while checking out some D&D books he decided to try one of those board games he always saw at the local game store. Settlers of Catan hooked him into this great hobby of board games. Chris will play any type of game, but has a soft spot for fantasy and Sci-Fi themes ...with railroads coming in a close second.