Romance of the Nine Empires began life as a fictional card game featured in the fantasy comedy Gamers: Hands of Fate and the pitch had me believing the game had actually been around for years. I thought it strange I’d never heard of a game which had supposedly been around for a decade and a half, but it isn’t as if I know about every game on the market so it certainly could have been a possiblity. As part of the crowdfunding for the film, AEG promised to actually create a game if the project reached its goal. AEG’s Todd Rowland pulled back the curtain recently since I wasn’t the only one who believed the game had been flying under the radar for years. So what exactly is Romance of the Nine Empires (R9E) about? 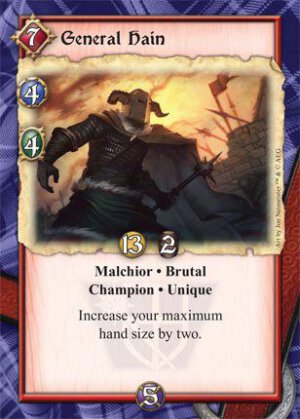 R9E is a fantasy card game which stands well on its own while also providing enough interesting gameplay to want to see more future expansions to the system. The world of Countermay is populated by nine factions (five are included in the game itself) who are vying for control. Each player controls one of these factions through each year (Turns) broken down into seasons (Phases). The world of Countermay is dying, after a thousand years of war, and the only way the world will survive is through the unmitigated control of one of the empires.

The empires are a mashup of fantasy conventions including the undead, magic users, steampunky aliens, ancient civilizations, and even The Displaced – an American Army unit transported from 1945 Los Almos, New Mexico. The main currencies in use are Gold and Food.

Each player begins with a faction deck which indicates what their Stronghold will be as well as the total amount of Castle points with which you can start play. The Stongholds each have special abilities and may be “bowed” (tapping anyone?) to generate Gold. Each player also receives food equal to the Storage value of each Castle in play as well as single Motte and Bailey Property cards.

The game begins by each player shuffling their deck and drawing four cards plus an additional card for each Castle they control. The cards breakdown as…

Castles – These fortresses are where food is stored and also may possess a special ability. The Storage value is important because if you begin the game with a particular Castle the Food stored there is free at the start.

Heroes – These are the main characters driving the story as well as your leaders in battle. Heroes cost both Food and Gold to bring into play and not only can they live or die in Battles but also accept Quests or can even decide to call it a day and quit fighting for your faction.

Property – Resources to produce Gold, Food, or other strategic advantages.

Items – Special equipment which are attached to Heroes to provide special abilities and bonuses.

Cohorts – Followers who are attached to Heroes to add Strength and possibly special abilities.

Spells – Cards which are attached to Wizard Heroes which act just like Items.

Tactics – Moves which can be played at no Food or Gold cost but may have specific requirements before being able to play them. Tactics are one use only.

Quests – Epic stories which reward the player upon completion. Quests require a Glory cost which means Heroes equaling that total must be bowed until the Quest is completed. Completed Quests also add to your Renown total and may also bestow a Quest Reward token which provides a special ability. 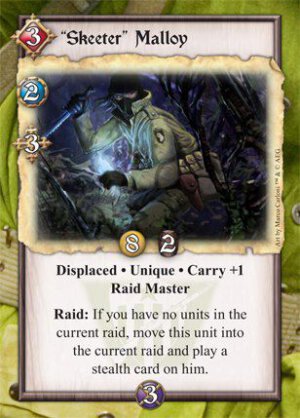 During a game of R9E you’ll purchase Properties to boost your economy, recruit Heroes to fight your opponents, improve your Heroes and their armies through Items, Cohorts and Spells, and attack your enemies to destroy Castles, steal Food, while sending Heroes on Quests. There are three ways you can win a game of R9E: Dominance (Be the only player with Food at the end of a turn), Popular (Earn 50 Renown points and have three Quests in play at the end of a turn), or Conquest (Destroy all the other Castles in play – outside of your own of course).

Each game turn represents a year and is broken into four phases:

Spring – Basically an upkeep phase where cards are unbowed and any effects taking place in Spring are applied.

Summer – Really the main phase where most of the action takes place. During this period you’ll bring new Properties, Heroes, Items, Cohorts, Spells, and such into play. Certain cards will also indicate they can only be played in Summer. Players also attack each other during Summer and Battles breakdown into a bit of a mini-game of one-upmanship as cards are played or bowed in order to add strength to either the attacker or defender. If the attacker eventually wins, the Castle they attacked will be destroyed; lose too many Castles and you’ll find yourself hamstrung since you won’t have anywhere to store Food.

Quests are also played during the Summer Phase.

Autumn – This phase is where players will attempt to use Heroes to raid Castles in order to steal Food. These raids play out much like Battles but faster and the end result for winning a raid is you’ll swipe some Food from your opponent.

Winter – Players can now take Food being carried by Heroes and place it into Castles. Food can also be shuffled around different Castles as the players prepare for the next year. Any Quests which haven’t been completed are discarded and special effects which were in play end. You’ll also check to see if anyone has gained a Dominance (only player with Food) or Popular (Renown over 50 and three Quests in play) victory. If no one has won you’ll move on to the next turn.

Everyone draws four cards and checks to see if they need to discard down to their hand limit; more Castles mean more cards in hand and as you lose Castles you’ll face the restriction of four cards plus one for each Castle you control. 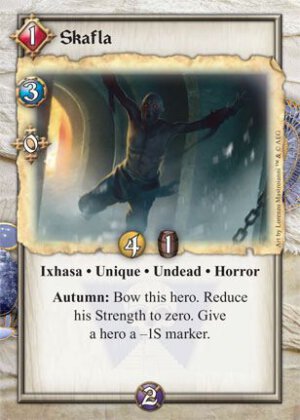 With more than two players you’ll simply alternate taking turns playing cards, conducting battles, and so on until everyone has passed on doing anything further. Personally I enjoyed a three player game quite a lot and the design shines regardless of how many people are sitting around the table. Obviously game time will inflate based on the number of players so I’ll assume a five player game will probably clock in around two hours or so.

Romance of the Nine Empires is sure to appeal to fans of collectible card games; there are plenty of opportunities to cleverly time when you play cards during Battles and you’re never completely sure if you have your opponent beaten if they still hold cards in their hand. That leads to a lot of back and forth in the game and each deck is built toward a particular style of play.

It’s important to note R9E isn’t the easiest game to learn and the rule booklet even mentions first time players should play head to head with only the Ord and Malchior decks since they’re geared toward a straight forward military beat down. The rules do include nice examples of play but it’s still going to take a bit of effort, and a few games, to get your sea legs. A quick start guide is also included to provide a look into the basics of the system.

Everything about R9E is nicely presented and high quality. Each of the five decks are balanced nicely and there’s certainly going to be a particular deck which will appeal to a player’s preferred style. Where the cards included in the game do stumble is in the inclusion of the extra cards which can be used to construct your own decks. Since cards can only be included in your deck if they contain one of the keywords found on your faction’s Stronghold, I found the usefulness of all the extras is diminished since you obviously only have certain factions who can use them.

While I certainly got a big kick out of R9E, the rules might be a bit daunting and play a touch too deep for casual card gamers.

For a game which was designed almost as a gag – included as an incentive to fund Zombie Orpheus’ Gamers: Hands of Fate – there’s a hell of a lot to really like with R9E. Many of the mechanics which make CCGs so popular are here so you get that same addictive gameplay without the seemingly never ending expense of purchasing more and more cards. Here’s hoping R9E is well received because I’d love to see the other four factions of Countermay (as well as additional cards for the five established factions). AEG has recently announced there would be a new expansion arriving in early 2014 and I’ll surely be lining up for additions to the world of R9E!

For a game which was designed almost as a gag – included as an incentive to fund Zombie Orpheus’ Gamers: Hands of Fate – there’s a hell of a lot to really like with R9E. Many of the mechanics which make CCGs so popular are here so you get that same addictive gameplay without the seemingly never ending expense of purchasing more and more cards.

User Rating: Be the first one !
Tags
AEG Mark Wooton Romance of the Nine Empires