Welcome to a world of mad, inspirational wonders and wild scientific theory wrapped in fog, run by gears, and lit by gaslight. Steampunk is a venue for adventure, no doubt about that, with science and technology unhindered by the laws of physics, with societal norms from any culture past, present or future, and with only as much historical accuracy as fits the whims of the moment. It is a realm where anything is possible under the guise of skimming whatever we want from an idealized – or grossly imperfect – version of the 19th Century.

There is no denying that Steampunk is cool. Steampunk is a sub-genre of science fiction and fantasy, in which the world has evolved in a much different way. Much of the historical Steampunk literature takes place during the Victorian era of Britain, or the wild west of the USA. Advances in mechanical engineering gave birth to a clockwork, gadget filled society. Consider the works of Jules Verne and H.G. Wells as examples of the possibilities of Steampunk. It involves a world with mechanical artificial limbs, steam powered robots, hand cannons instead of pistols, incredible flying machines, mad scientists, alchemy, and travels through the Aether.

It has been a loosely defined genre at best, scattered throughout the novels, short stories, and movies from the past century. If you’ve seen The Wild Wild West movie or TV series, the recent Sherlock Holmes movie, The League of Extraordinary Gentlemen, Warehouse 13, or even Sanctuary, then you have seen examples of Steampunk in action.

The first role playing game to try to bring the Steampunk genre into a playable world was Space 1889, designed by none other than Frank Chadwick in 1988 and published by GDW. The focus was most assuredly Steampunk, but it was based upon a single flavor or the genre. It was an excellent system and spawned quite a few supplements and adventures.

Steampunk has evolved since then though. There are new ideas and new flavors of the genre, including a fantasy setting where humans exist alongside legendary creatures. As the genre has evolved, so has the desire for an RPG rule system and sourcebook to bring the diverse amount of information together into one playable system. I’m speaking of the newer trend in RPGs that concentrate more on Role Playing and less on dice rolling and miniatures.

Steampunk RPG from Uber Goober games does just that. It presents a system, freely adaptable by any Game Master to

run a group of players through adventures in the Steampunk Universe. The book itself is softcover, 160 pages, in black and white, with some very good illustrations of artwork and photography scattered throughout its pages.

The book is broken into several sections. In the introduction we are given a description and feel for the Steampunk Universe. The book presents several different world views of the genre, including the classic Victorian view where life in general is good and adventure is to be had everywhere. There is also the darker version, where the lower classes are oppressed and the world is dark and dirty. Then there is the fantasy version where humans exist alongside fairies, trolls, elves, and other such creatures. The book gives you a glimpse into each world view and how they function based on technology, the people, government, groups, and other factors. It’s the first example I’ve seen of putting all this together on paper and is quite good.

You are also introduced to the concept of Eldritch Copper. Invented by the designer as a way to provide a mystical fuel source that people turned to when wood and coal became impractical. You don’t want the players all having to add coal to their gadgets to keep them running, an alternate fuel becomes a necessity. Eldritch Copper is a special form of copper that was discovered which holds large amounts of energy, able to power your airship, or mechanical arm, or whatever. It is a license taken by the author and provides practicality to the game.

Finally you are introduced to the concept of the Aether. This was an actual scientific theory back in this period. In Steampunk it can actually exist, and has been a vehicle used by different authors. The Aether is a mystical substance that exists between the particles of all things. It is a white, cloudy type substance that can be used to travel between worlds, dimensions, universes, or just as a place to hide your stuff. There are benefits and detriments to using and travelling in the Aether, you’ll have to read it to discover them.

The book takes you then into the core rules, which are concerned mostly with character creation. There are standard attributes, skills, powers, feats, flaws, races, and more. Everything is based on your various scores that feed into your MDP, or Mighty Dice Pool. When called upon to perform any task that would involve some test of skill (combat, climbing a sheer cliff, bluffing your way into the Governor’s ball), you will roll the dice in your MDP against the difficulty of the task to determine a number of successes (rolling a 5 is one success, rolling a 6 is two successes). The result is based upon the number of successes that you roll. If you roll too many 1’s, you can botch a task and something bad can happen. Sometimes you might have need to spend a “Hero Point”, of which you are granted one at the beginning of each adventure, to reduce your damage taken from being killed to being incapacitated. You can save up to six hero points, for when you have one of those really bad days.

You also have the ability to “Push” yourself when trying to succeed at a critical task. By pushing yourself, you can add several dice to your MDP, but this will reduce your dice pool overall until you get some time to rest or it might even cause physical damage to your character.

Character creation is pretty involved, and so they were nice enough to provide some examples of how several different character types were generated. These are not only handy, but interesting too as you get a glimpse at some of the possibilities of the game. The skills, powers and feats are nicely fleshed out, there are 70 pages concerning character creation and the dice system with instructions that these are by no means comprehensive and that players can develop their own ideas as that see fit as long as the GM agrees and can assign practical numbers to it.

The book then goes into the mechanics of movement, combat, skill checking, and character advancement. There is a nice 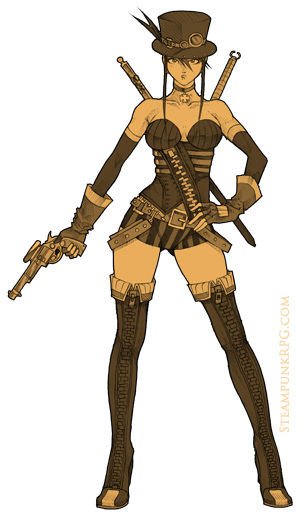 combat example as well, so you can see how it should all work. In combat, your hits and your damage are all resolved with a single die roll from the included damage chart based on the number of successes you roll (or have rolled against you). This adds some streamlining to the combat system and helps to keep your adventures from bogging down. There are rules for shortened versions of mass combat too, so you don’t have to roll out every hit in a “Some vs. Many” or “Many vs. Many” situation.

Following this is a short section on LARP rules for the game, if pen and paper just isn’t enough and you want to be able to wear those special goggles at more than GenCon.

The Steampunk sourcebook section is next with descriptions of secret societies and economics. Plus there are sample guilds, worlds, creatures, characters, cities, vehicles, powers and more to flesh out your Steampunk campaign. There are plenty of ideas here for any GM worth his/her salt.

Finally, the book wraps up with some suggestions for potential GM’s and a list of other resources for Steampunk.

This has to be the best Steampunk guide I’ve seen and must have involved a lot of research and development. My one wish is that there were some existing scenarios developed, so that a GM could just jump in and start running a campaign. Maybe that’s planned for in the future.

In fact, I have noticed that Uber Goober has just released an expansion called Urban Steampunk. According to Uber Goober, this sourcebook provides the framework for an overflowing steampunk city, including government, demographics, law enforcement, utilities, sanitation, new secret societies, 20 complete locations, 85 story seeds, and over 40 new NPCs. Urban Steampunk is the perfect setting for any campaign that takes place in a retro-futuristic world, be it grim or frivolous, historic or fantastica. So this should help with the adventure development process.

This has to be the best Steampunk guide I’ve seen and must have involved a lot of research and development. My one wish is that there were some existing scenarios developed, so that a GM could just jump in and start running a campaign.