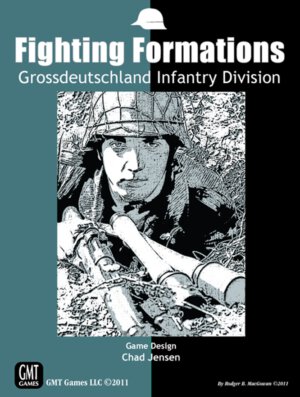 Playing time: 2 hours to a weekend of gaming

Designer Chad Jensen’s latest, Fighting Formations: Grossdeutschland Motorized Infantry Division, is a platoon-level tactical wargame set during the Second World War focusing on historical battles fought by that division from 1942 through 1943. FF:GMID is designed for two players where each controls a force ranging from company size to relatively understrength regiments. Included are ten historical scenarios and one learning scenario, through which you’ll witness the evolution of what began as a well-equipped (yet nondescript) infantry division into what eventually became one the most elite fighting forces of the war. 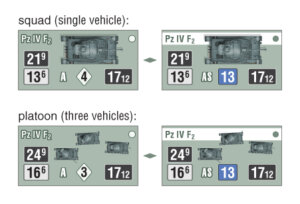 The maps depict the various terrain elements of the Eastern front, with hexes representing about 250 feet and the time scale is five minutes of simulated action per turn. Smaller scenarios should play out in two to three hours while larger battles could take a few sessions or a weekend to finish. It goes without saying that, as with most recent GMT releases, the components are top notch. The rules as well as examples of play are outstanding. One small issue some may have is with some of the unit counters. They are rectangular and there is loads of info on each chit which might make them a little hard to decipher.

In FF:GMID each unit represents a squad or platoon of soldiers, vehicles or guns.

One of the interesting mechanics introduced in FF:GMID is the initiative-based order matrix. What makes it interesting is that there is no fixed sequence of play each turn. Rather than having a set schedule of movement and firing or other usual wargame impulses, players select order cubes from the matrix and adjust the initiative pawn according to the cost of the order. Each order may have a different cost associated depending on which side issues the order. For example, it costs two initiative to fire but three to move for the Germans. The Soviets are the opposite; two to move and three to fire. This reflects the differing command structures of the opposing forces.

When a player removes a cube from the matrix they may perform the order next to that cube or any order located lower on the chart. After the order is paid for, individual units are activated – at a cost of zero, one or two initiative each. A unit activates for zero initiative if it is within command range of a Mission Command marker, one initiative if it’s within range of a Tactical Command marker, and 2 points per unit if they are outside of the command radius of any friendly Command marker – thus considered to be “Out of Command”. The initiative marker moves toward the opposing player’s side and the player conducts his order. Once the order is completed, if the initiative marker is still on the side of the track of the phasing player, they may take another cube and carry out another order. If it is on the opponent’s side, that player takes a cube and conducts an order, and so it goes. This sequence continues until all the cubes are gone.

Ranged combat resolution is quick and easy, as the Firepower value is added to a roll of two dice. This pair of dice (d10,d20,d12, etc) depends on various conditions. If either die rolled is equal to or less than the Hindrance level of the terrain then that attack will automatically fail. Any roll of a one will cause an attack to fail immediately.

The resulting attack total is compared to a defenders morale or armor, with any terrain modifier adjustments, plus 2d10. If the result is greater than the defense value of the target, a randomly drawn hit counter is placed on the target unit. These results are a bit different depending if the target is infantry or armor and can be as minor as the unit being shaken to an all-out kill. Reaction fire is allowed as well and is presented fairly cleverly.

Close combat, when units are in the same hex, uses the same paired dice mechanic as ranged combat. The defender chooses the targets of the rolls and resolution is determined by referring to a combat results chart.

The melee chart seems to be a bit less successful in execution compared to the relatively simple direct fire system, but it’s still not very difficult. Air support and artillery are also modeled with a corresponding attack result chart. There’s plenty to like about FF:GMID including Asset Cards which take the place of orders or allow for reactions to your opponent’s order, special actions for unique units, as well as other tidbits of goodness.

The initiative matrix smacks a bit of a Eurogame flavor but introduces a new twist to how decisions are made in conducting your battle plan. You can continue to issue smaller orders to hold initiative as long as possible or you can go for the gusto with a divisional command knowing that you opponent will be able to immediately follow up. There’s plenty of seesawing back and forth and this helps keep the tension high.

There’s enough of a different feel to FF:GMID even if some of the mechanics have been seen elsewhere. You get a good sense of not only the tactical decisions which need to be made while, at the same time, operational decisions come into play. There’s plenty to ponder while playing but one never feels overwhelmed and the initiative matrix and combat becomes second nature rather quickly.

Fighting Formations looks like it could be yet another series wargamers everywhere will anxiously await new expansions and editions. In other words, every serious grognard needs to have FF:GMID on their shelves! This certainly isn’t for the introductory crowd but even those with a smattering of wargaming experience should take to this title with relative ease.

An excellent addition to any serious grognard's wargame collection. While the euro-style look of part of the design may throw some off, this is a great tactical level look at WWII warfare.