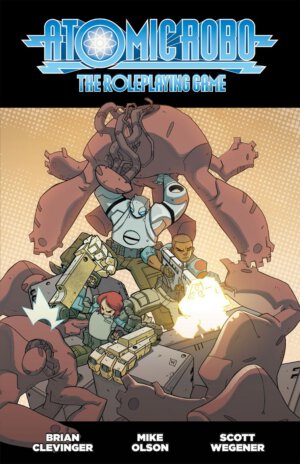 Players: It’s an RPG so best with 3 or more

I make it no secret I think Atomic Robo is one of the most fun comics in your FLCS today so I was really looking forward to getting a peek at Evil Hat’s roleplaying take on the series. Atomic Robo: The Roleplaying Game utilizes the all-purpose Fate system, which has been making quite a name for itself as of late. If you aren’t familiar with Atomic Robo, the Red 5 Comics series tells the story of a robot possessing “automatic intelligence” who was created by Nikola Tesla in 1923. Robo stories take place in a variety of eras and feature adventures featuring giant ants, Nazis, Lovecraftian monsters, and more. The comic was created by writer Brian Clevinger and artist Scott Wegener and is filled with lots of action and plenty of humor, so if you haven’t been exposed to the world of Robo and his team of Action Scientists I highly recommend tracking down the trade paperbacks or grabbing digital copies.

Yet, this is a review of the roleplaying game and not the comics so let’s get down to brass tacks… 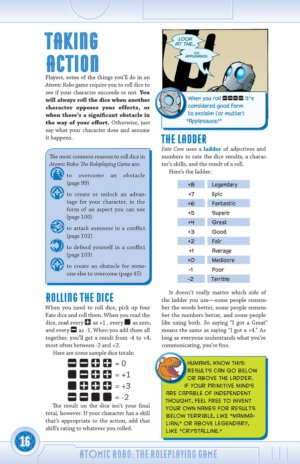 For those unfamiliar with the Fate System, the game is a generic setup so you can utilize the core mechanics for any number of genres and there’s already been plenty of releases such as pulp action, science fiction, horror and so forth. I will mention Fate (and in turn Atomic Robo) don’t use standard gaming dice but special Fate dice which are six sided dice with two blank sides, two sides sporting a positive “plus”, and two sides with a negative “minus.” I know there’s been some grumbling the Fate dice can be pretty pricey (around $15 on Amazon)but the reality is anyone with a touch of common sense can simply designate ones and twos on a standard six sider as negative and the fives and sixes as positive with the threes and fours as simply blank. Geez… You don’t need to be an Action Scientist to figure that one out!

Those who have been following roleplaying games for a long time will notice the Fate System shares a lot of mechanics, including the use of the four positive/negative dice, as the old FUDGE roleplaying game. Atomic Robo uses Aspects, Skills, Modes, Stunts, and Mega-Stunts to facilitate gameplay. Aspects come in a variety of flavors – game aspects, character aspects, situation aspects, consequences, boosts, and experience –  but they all play out in basically the same manner: something which drives story telling.  A Game Aspect sets the tone of the campaign or adventure and could be something along the lines of something like “Deviously Defeating the Diabolical Dr. Dinosaur” while a Character Aspect describes something specific to an individual such as say Robo’s relationship with Tesladyne Industries. Skills are pretty straightforward, as in most game systems, and tell you what a character is able to do proficiently. Modes revolve around actions such as action, banter, or intrigue and each character will have varying levels of aptitude revolving around these modes. Stunts and Mega-Stunts define very specific unique abilities or bonuses which can come into play and also make every character an individual entity rather than just a cookie cutter archetype.

The nuts and bolts of Atomic Robo (and Fate itself) is the Ladder of adjectives and the Fate dice. The Ladder runs the gamut from Terrible (-2 modifier) to Legendary (+8 bonus)and this Ladder not only applies to skill levels but also the results of any dice rolling. As a quick example, let’s say my character is tasked with trying to hold open a rapidly closing set of blast doors long enough for the rest of my team to get through into the big baddie’s lair. Rufus, the aforementioned character, is a lovable musclebound meathead with has a Physique skill level of Good (a +3 bonus)but the GM has decided Rufus needs to meet or beat the Superb (+5) power of the rapidly closing doors. I’ll roll my four Fate dice and hope to pull off a total of two positives in order to thwart the mechanism long enough. Rufus is goofy enough to ignore the very real possibility of being crushed into a sticky mess and leaps to action. I roll three positives and a negative for a total of two positives, so luck is with Rufus and my team members run through before the hydraulics slam the powerful doors behind us. 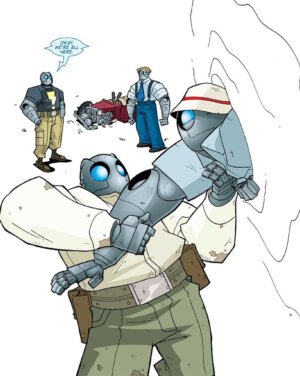 There are quite a few other mechanics utilized in Atomic Robo but suffice to say the Fate dice and the Ladder really cover all the action resolution regardless if you’re trying to sock a Nazi bastard in his Nazi face, hack into a super-intelligent computer, parlay with a potential ally, or fly a biplane through a tricky mountain canyon. Of course there are lots of ways for the players to tilt the odds in their favor such as the use of Fate points as the real aim of Atomic Robo is to concoct fun and entertaining stories where everyone at the table plays a role in their creation.

I will mention I was surprised that Atomic Robo only has thirteen default skills (Physique, Will, and Vehicles to name a few) but the inclusion of Aspects and Stunts and Mega-Stunts can create some unique modifiers in situations. Plus, there are no hard or fast rules about creating your own skills – if fact it’s encouraged – so you can add the sort of detail into Atomic Robo you decide upon. Aim to have fun with the skills and give them personality; rather than “Crackshot” look toward something along the lines of “Shoots the Wings Off Flies.” You can even expand the Ladder if you’d like a wider range of modifiers than -2 to +8, so knock yourself out.

Atomic Robo is a jam packed 320 pages and you’d be hard pressed to find a better game out there so in tune with the source material it’s based upon; everything about the RPG just screams Robo and it’s readily apparent Brian Clevinger and Scott Wegener had loads of input in the final product. You’ll find tons of Atomic Robo art throughout and, unlike in my upcoming review of the Margaret Weis Firefly RPG, I think all the artwork is a major boon to the book. Whereas Firefly suffers because the art is only from the TV show and doesn’t add but rather subtracts from the product, Atomic Robo’s art really puts you in the right mind for getting a game together and many even visually demonstrate gameplay mechanics.

One great angle of the Atomic Robo RPG is the fact you don’t necessarily have to run a Robo-centric game at all and you’re free to create your own sort of campaigns set in a pulpy, weird science world. Granted Atomic Robo probably isn’t best suited for a straight up DC/Marvel superhero type of game but I’d highly doubt anyone would be peeking at this system for that genre in the first place… Yet those looking to conjure up two fisted, action packed tales should feel right at home. 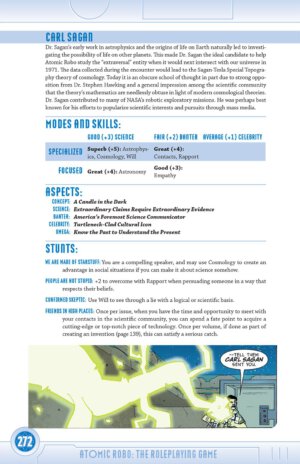 Atomic Robo is well suited for veteran roleplayers and newbies alike and key game concepts are clearly presented and explained. There’s probably a more rules heavy approach than folks who want the barest bones of RPG rules but there isn’t much heavy mental lifting so once you get the handle on rather simple building blocks of the mechanics playing and running will be a breeze. Roleplayers who look for hundreds of pages of skills and feats will probably be disappointed but there’s no one telling you can’t write those hundreds of pages yourself.

Character creation comes in two flavors: the “EZ – No Math” creation to get players up and running ASAP or a more detailed step-by-step process which most veteran gamers will turn to in order to create their alter egos. Either way it isn’t as if you’ll devote an entire gaming session to creating your adventurers; unless you want to that is. Atomic Robo gives you a free hand in tailoring your character in any way you’d like; the more imaginative the better.

There’s no doubt Atomic Robo: The Roleplaying Game is a labor of love throughout as about one hundred pages are devoted to Robo, his allies, his adversaries, and his adventures. I can’t think of anything within the series, outside the current Atomic Robo and the Knights of the Golden Circle storyline, which isn’t covered. Honestly, you could conceivably read the RPG and know nearly everything about the world of Atomic Robo without ever reading a single comic. Of course that wouldn’t be any fun so I strongly recommend swinging over to comiXology since they have a good number of free issues to download and enjoy!

In other words, grab some of the comics because they’re a blast!

If you’re already a fan of Atomic Robo, the RPG is a must have even if you never plan on running a game just because it’s a wonderful sourcebook for the series. For those who might not be immersed in all things Robo, I give the roleplaying game my highest recommendation because it gets just about everything right. Sure, my opinion is no doubt colored because I love the comic but none the less if I weren’t an avid fan Atomic Robo: The Roleplaying Game would still be a must buy. Plus, how can you not love an RPG which includes Nikolia Tesla, Thomas Edison, Carl Sagan, and Stephen Hawking as NPCs?

TGG REVIEW
9.5 TGG SCORE
0 VISITORS' SCORE (0 votes)
Summary
If you’re already a fan of Atomic Robo, the RPG is a must have even if you never plan on running a game just because it’s a wonderful sourcebook for the series. For those who might not be immersed in all things Robo, I give the roleplaying game my highest recommendation because it gets just about everything right.
REVIEW SCORE
What people say... Leave your rating
Sort by: