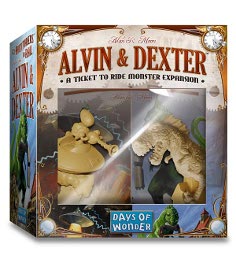 A preview copy of the new Ticket to Ride expansion, Alvin & Dexter, arrived here recently, and my first reaction was who is this expansion for? The plastic figures—Alvin is an alien in a flying saucer and Dexter is a T-Rex, and both of them are mounted on train stations—are great. But I wondered if this wasn’t just a gimmick, and maybe a distracting gimmick at that. Like adding a useless dexterity exercise to a well-established brand of tile-laying game.

After some games of Ticket to Ride with the Alvin & Dexter expansion, I’m happy to report that Days of Wonder has not catapulted the meeple. 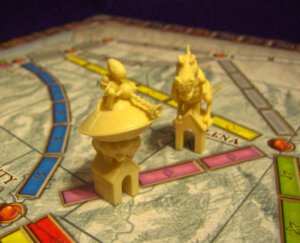 Alvin & Dexter come on to the board right at the beginning of the game. After you’re set up and have decided on a start player, the last player picks up Alvin and places the alien on any city they like. The player to their right (the penultimate player) then places Dexter and the game begins with the be-monstered cities now known as Cities in Chaos (which I recommend you say in a disaster-movie voiceover tone). The important point is that a City in Chaos cannot have a route claimed into or out of it. The monsters are a block. But they can be moved. At any time during your turn—and that phrase is important—you can play a locomotive card, or two, and move one of the monsters. For one locomotive, you can move a monster up to three spaces; for two locomotives, you can move a monster up to six spaces. When you move the monster, their card goes face up in front of you and stays face up until the end of your next turn. During that time, no one can move that monster again—even you. After you’ve flipped the monster card, you keep a stack of the cards you’ve turned over. At the end of the game, the player with the most Dexter cards gets a fifteen point bonus. Alvin scores exactly the same way. Tied players both score.

Of course, Dexter and Alvin will be on the board at the end of the game. Any Destination Ticket that has a terminus in a City in Chaos is worth half—rounded down. That applies both to completed tickets (you lose the extra points) and uncompleted tickets (the penalty is now lessened).

I wanted to get this expansion to the table quickly and to experiment with play styles. I’ll tell you right now that this will not be seducing hardcore confrontational gamers to the Ticket to Ride brand. Alvin & Dexter isn’t Monsterpocalypse on rails. But the monsters do add a light-hearted bit of strategic depth to a well-loved game. The choice to keep a wild-card locomotive in order to claim a longer route or burn the card to send one of the monsters over to block another player should be considered carefully. You can also send a monster over to squat on a city you need but that another player is angling toward. On a later turn you can play the locomotive, move the monster, and claim the route for your own. You can’t block a city forever, and you can’t undo previous routes, but the extra strategic options are a welcome addition. 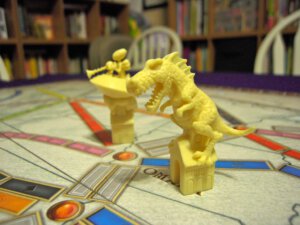 We noticed that the monsters don’t do much early in the game, and the first part of our first play made us wonder if there was any point to the expansion. But as the game progressed—and as we played more games—we could see that Alvin and Dexter start to come into their own at about the halfway point. We moved them to block other players, and then moved them onto cities that were likely to be the endpoints of high-scoring Destination Tickets. Lastly, we had to keep track of who had used which monster—there’s a fifteen-point bonus at stake.

By the end of our plays of Alvin & Dexter, I had a sense of who this expansion is for. If you like Ticket to Ride, this expansion adds a very simple extra bit of strategy, and for very little money. Many of the people I play with don’t mind a bit of confrontation, but they didn’t grow up as war gamers. Alvin & Dexter gives them a level of confrontation that they find appealing without moving into serious ‘take that’ territory. The expansion works with all other maps and expansions, and I imagine that this expansion will work slightly differently with each map or rules variant you play.

Usually, we give a numerical rating for a game, but since this isn’t a full game, I’m not sure that would work. So I’m making something up on the fly: Rock (solid!), Paper (it could land either way, hard to tell), Scissors (which is what you should take to the game immediately). Alvin & Dexter is rock solid. Pick it up when you can.

A solid addition to your Ticket to Ride games which toss a few new options into play.

User Rating: Be the first one !
Tags
Alvin & Dexter Days of Wonder Ticket to Ride