Game Name: Into the Unknown: The Dungeon Survival Handbook

Publisher: Wizards of the Coast

Being an adventurer is a hard business. Dungeons offer adventure, treasure, and glory, but they are fraught with deadly traps, vicious monsters, and sinister puzzles. It takes more than a stout heart and a sharp mind to survive. A hero must be equipped with knowledge and tools if he or she is to face the unknown and live to tell about it.

Into the Unknown: The Dungeon Survival Handbook is a guide for players and Dungeon Masters who want to play in a Dungeons & Dragons game that explores dungeons and plumbs the blackest reaches of the Underdark. Whether you’re a Dungeon Master seeking to create a fantastic location populated with beholders and mind flayers, or a player looking to equip your character with the means to fight such threats, this book is for you. Players will find an assortment of new powers, equipment, feats, character themes, and player races, including the kobold and the goblin. For Dungeon Masters, the book is a trove of dungeon-building advice and details, including lore on classic dungeon monsters, some quirky companions for adventurers, a few timeless treasures, and tips for incorporating players’ character themes into an adventure.

The Rise of the Underdark Dungeons & Dragons event kicks off with a bang with the release of the supplement Into the Unknown: The Dungeon Survival Handbook. The supplement is a useful guide for players and Dungeon Masters alike as well as even being an interesting read for those of us not firmly familiar with the 4th Edition of the rules. 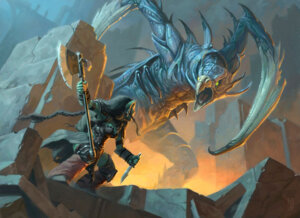 This 160 page hardcover book is broken down into three chapters, each further drilling down into various topics, as well as two appendices and the supplement itself is top notch as is the information contained within. There’s enough artwork sprinkled throughout, to keep things interesting, without overpowering the accompanying text.

Chapter one looks at new character themes, races, and powers geared toward dungeon delving. As 4th Edition will make way for an all new D&D, Wizards of the Coasts has looked to continue to include more story building devices for different classes as opposed to simply tossing more stats and mechanics into the mix. These themes do nicely and there are seven: Bloodsworn, Deep Delver, Escaped Thrall, Trapsmith, Treasure Hunter, Underdark Envoy and Underdark Outcast. Something along the lines of the Underdark Envoy are pretty specific to the setting but others, like the Bloodsworn (a character’s most hated enemy or enemies) and the Treasure Hunter, would easily come into play in any campaign you may be running. Each of the themes also has a fully fleshed out example character to better get a feel of how they may play out.

Obviously each of these new themes bring with them special abilities upon character creation as well as unlocking further powers upon levels five and ten, along with optional abilities that can enter play depending on the decision of the DM.

Three new player races are introduced with Goblins, Kobolds, and Svirfneblin (or deep gnomes) receiving the full treatment to be added to any player group. Yes even goblins and kobolds have lives and families and I find it intriguing these new options are made available. And you thought those creatures were only low level cannon fodder for your adventurers…

Rounding out chapter one is a look at new powers that are specifically focused on the Underdark and dungeon adventures. Twenty four new class powers and twenty new skill powers are spread across the different character classes and just about everyone gets something new to add to their repertoire. Some can be as simple as the third level bard power, Ballad of the Zombie King (giving a Charisma bonus against psychic damage and an attack penalty to your target) up to the impressive 13th level Warden power of the Pulverizing Impact (blasting nearby enemies with thunder damage as you drive your weapon into the earth.) 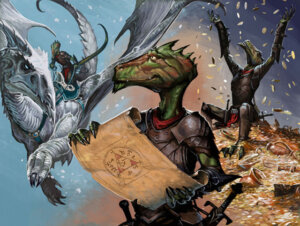 Chapter two is devoted to the players as it goes into detail about tactics to use while exploring into the Underdark. This even includes the Top Five Rules of Dungeon Delving. Rule number one? Don’t split the party! Sure, it might be tempting to send you smallest party member into that inviting tunnel but what will they do once they reach the other side and find a threat they’re unprepared to tackle?

A range of dungeon types are discussed in detail as well as the unique approach players may need to take when they tackle a floating castle or a prison. Some of the monsters found in the Underdark are also laid out as well as a peek at the adventuring gear one may require during the party’s quest.

I especially enjoyed the sidebars included in this chapter that discussed some of the classic D&D modules of the past such as The Village of Hommlet and The Temple of Elemental Evil. Talk about some blasts from the past! I thought these short pieces on some of the fondly remembered adventures was a nice touch.

The final chapter and the appendices are tailored for the Dungeon Master. The information contained within is useful and interesting, if a bit light. Of course, by this time in the life cycle of D&D 4E there probably isn’t a whole lot out there that hasn’t been tackled in other supplements but for someone who doesn’t have volumes upon volumes of source books and supplements there may not be enough depth to the chapter. This isn’t to say what’s included isn’t useful, as it is, and there are some interesting tips of creating your own adventures as well as getting the most out of the Underdark setting.

All in all, Into the Unknown: The Dungeon Survival Handbook should make a welcome addition to anyone playing or running D&D 4E. There’s plenty of good info and lots of inspiration for more fun and interesting adventures below the surface of the land.