Playing Time: One to Two Hours

Combat Commander: Pacific is one big game! Tipping in at almost twice the box depth of a standard GMT title, the game is chock full of maps, counters, rule and battle books, and three decks of cards used by each of the combatants. As we’ve come to expect from GMT, it’s all of the usual high quality, although I do want to point out that the maps are not mounted. Still, the maps are sturdy enough that they should hold up to repeated play. The game simulates squad level, tactical action throughout the Pacific Theatre during WWII. 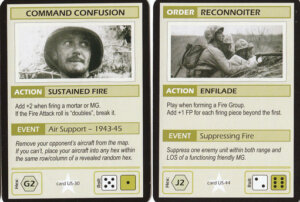 I’ll point out that this was my first encounter with the Combat Commander series so I came to the game without any knowledge of the system or the previous European centric releases.

Combat Commander: Pacific ships with twelve scenarios and there are also a series of additional scenario packs available – I’ll have a review of the latest in the very near future – so you’ll find there’s loads of interesting engagements to involve yourself in. This is a card driven game so you’ll find that each nation (the U.S. Marines; the Pacific Commonwealth troops of India, Australia and New Zealand; and the Imperial forces of Japan are the combatants) has a Fate Deck which will drive the action. Every Fate Card is chock full of information such as an order, an action, an event, a die roll, as well as an indicator of a random hex. You did read correctly; the Fate Cards contain die rolls as you will not be using dice in the game. Depending on the role each player is taking on will determine the size of their card hand. Invaders receive seven cards, Attackers six cards, defenders five, and Japanese units in a Banzai posture will have a hand of three cards.

Let’s look at the breakdown of a typical Fate Card… 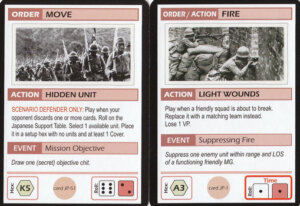 Each Fate Card features one order. These are the main function you’ll use the Fate Card for and you can order units to move, fire, revive, or infiltrate. To choose to issue an order you simply play the card and select a unit. If you choose to issue the order to a leader, all the units in that command – and within command radius – will perform that order.

Your units may Move. That’s simple enough as you will determine the unit movement rate and take into account any terrain factors. You can’t fight the enemy if you can’t get near them…

Your units may Fire. Nothing too difficult there as you’re taking the fight to the enemy. You start by looking at the firepower rating of the unit(s) firing, add or subtract modifiers based on thing such as terrain and multiple units attacking, and flip the next Fate Card from your deck. Look at the dice on the card and add that to your total. Follow this up by adjusting the target’s morale with their applicable modifiers and have your opponent flip one of their Fate Cards to add in their dice score. If the attacking total is higher, then that target unit is broken and their counter is flipped over to reveal a lowered set of values. A broken unit that is broken again will be eliminated thus earning the attacker victory points.

Advance is another movement order in which the unit can move one hex, and one hex only, but cannot receive opportunity fire. Normal move orders can draw opportunity fire from the enemy. What? Like they’re just going to wait for you to get into position? 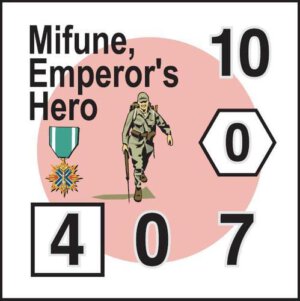 Charge can be issued to Japanese units if they are already in a Banzai Posture. This can be especially nasty for the Allied troops as all Japanese units that have not already used an order may revive and execute a move order.

Japanese units may also Infiltrate which, after following a specific sequence, allows hidden units to suddenly enter the fray.

You may order your units to Revive and this allows you to flip them over from their broken status. Look at this as a rallying action and you’ll be very happy when you have one of these cards in your hand.

There are also orders for breaking down Japanese communications, requesting assets (artillery, bombing runs, strafing runs, and so forth), denying assets (which puts the kibosh of the former as well as causing weapon failures), and reconnoitering.

All in all there are ten orders available (although not available to each side) so you should have a good mix in your hand. Obviously there will be times that an order you’d really like to issue but is not in your hand but so goes the fates of war. Each scenario will also detail how many orders each side may issue in a turn but neither player has to use that many orders; someone might run out of cards or decide they want to hold some cards in hand. This is an interesting feature as you’ll never know exactly how long each turn will last.

Each Fate Card also has an Action. These are played on top of the order and add some additional spice to the proceedings. Actions add a tweak such as laying smoke to cut down on opportunity fire during a move, or setting up a crossfire, demolitions, ambushes, and more! There are twenty one different actions in all and they really do change things up quite a lot so a vanilla flavored Move order could turn into a whole shooting gallery in just a few card plays. It’s important to note that the Fire Order is also an Action so you can use that card for opportunity fire during your opponent’s movement. 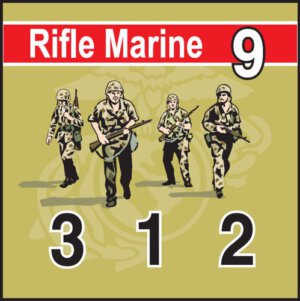 When you’re flipping a Fate Card for a dice roll, from time to time, you will see a red rectangle around the dice. This is a Trigger. The Trigger may say Disperse which removes one smoke or illumination counter from the map. Triggering a Sniper will make the player draw the next card an take a look at the random hex indicator. The player who drew the Trigger may then chose one unit (if any) in or adjacent to that hex and break it. An Event trigger will demand another card flip and execution of the event found on the Fate Card. There is also a Time Trigger which moves along the time track which brings about the end of the game.

It’s important to note that Events are what really blasts the game into the stratosphere. Some are good, some bad, but they all add a tremendous amount of flavor to the game. Granted there are twelve scenarios included in Combat Commander: Pacific and I can just about guarantee that you will never play one the same way twice. I’d rather not spoil the fun and reveal any of the Events but it’s safe to say that they can influence the tide of battle but none of them are so overwhelmingly powerful as to break the game.

There are three conditions that will bring a scenario to an end as there is no stagnant XYZ scenario is ABC turns long thinking involved in the design. The most interesting of the three conditions is the time track. Each scenario has a number of boxes on the track and once that box is reached the game comes to a conclusion at that moment. When a player exhausts their Fate Deck and reshuffles, the time marker advances a box. Also, if a Time Trigger activates, the counter advances a box. Of course, players have an idea of how long the game will play out but there is no predetermined end point as far as time. The other ways the game ends is if one player has no units left or casualties reach a predetermined level as per the scenario.

Once the game comes to a conclusion each player tallies his victory points – earned from inflicting casualties, taking objectives, and events – and the player with the most points is the winner.

At the end of the day I can say with authority that Combat Commander: Pacific is a fantastic game. Some folks may not like the randomness to much of the goings on (yes, I’m looking at the ASL fans out there) and the lack of any vehicles in the game but for the average wargamer, or person looking for a solid entry into wargaming, CC:P is a must have. As someone who is not a fan of combat results determined by a card draw (ala the die rolls on the Fate Cards) I have to honestly say that I got used to it rather quickly and didn’t feel that “all the good die rolls are in the discard pile!” I’m sure if that’s a big turn of for someone they can always bust out some dice and just flip Fate Cards to determine if a Trigger takes place.

The Rules and Battle books are of the same high quality, easy to understand format that GMT likes to spoil us with but, for a new initiate to wargames, they might look a bit intimidating. Yet, suffice to say during any hitch in gameplay, I easily found what I was looking for and the battle continued to rage on.

For any gamer looking for a fun and exciting squad level game depicting WWII action in the Pacific, you certainly can do no wrong picking up Combat Commander: Pacific!

At the end of the day I can say with authority that Combat Commander: Pacific is a fantastic game. Some folks may not like the randomness to much of the goings on (yes, I’m looking at the ASL fans out there) and the lack of any vehicles in the game but for the average wargamer, or person looking for a solid entry into wargaming, CC:P is a must have.