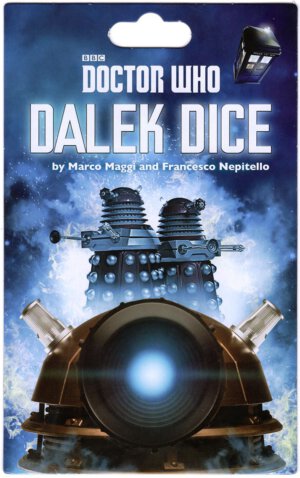 Players: One to six players

Ages: 13+ (More likely ten or eleven in my opinion)

Fans of Doctor Who have no doubt been keeping their eyes peeled for Cubicle 7’s Dalek Dice to arrive and, now that the game is available, no doubt wondering if this is worth picking up or simply the sort of licensed property cash grab that has become all to common in geekdom. Those who are curious can rest assured simply the fact Cubicle 7 is involved means you’re in good hands; look at their phenomenally popular Doctor Who Roleplaying Game as an example of the quality products C7 produces in the good Doctor’s name.

Dalek Dice includes ten custom dice, a dice cup, and a folding sheet of rules. The rules and dice simply go into the cup and you can easily toss the game into a purse, backpack, or glove compartment to bring along to your next family gathering/game night. The dice are especially nice since the designs on the faces are cut into each die as opposed to just a sticker or painted onto the surface. I will mention two of the dice in my copy had a face which wasn’t fully inked but a little bit of acrylic paint fixed that right up. Not a huge deal but worth mentioning. 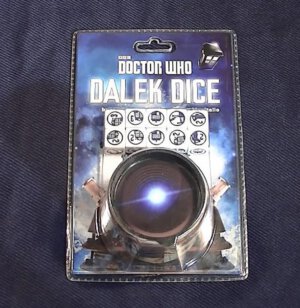 Each player represents a Dalek (or maybe a group of Daleks) aiming to exterminate as many humans as possible while avoiding the ever meddling Doctor. Once one player reaches sixty humans exterminated they’re the winner and named the most blood-thirsty Dalek in the galaxy. Or at least that’s how I crown the winner.

Dalek Dice is a “push your luck” which is played in rounds. To begin, a player rolls all the dice and takes a look at the results. Any Tardis or Exterminate! results are taken from the pool of rolled dice and the player must keep one of each. If at any time three Tardis dice have been kept, that player loses the round and doesn’t get to score any humans – The Doctor has foiled the Daleks’ nefarious plans. In the same way, if three Exterminate! results are kept that player automatically wins the round and will get to double their human score. It’s important to note, even if you were to roll five Tardis results during your round you’ll only keep one. The same goes for the Exterminate! result. This way the player doesn’t automatically win or lose a round right out the gate. Once a Tardis and/or Exterminate! die are set aside – if any were rolled – the player has to decide which dice they’ll keep and which to reroll.

In order to score those tasty humans the player must finish the round with his Dalek total exceeding the Human total. If you don’t have a higher Dalek total than Humans you won’t score any points for the round. That is unless you have three Exterminate! dice since then, as mentioned above, you double the Humans total regardless of the Dalek total.

The active player can continue to roll any of their dice until A) they have kept three Tardis dice, B) kept three Exterminate! dice, C) decides to stop, or D) has kept ten die results. You even get an additional five bonus points if you use all the dice. Yet, you might quit while you’re ahead too. As an example, lets say Judy has gotten to the point in her round where she’s kept two Tardis, one Exterminate!, eight Humans, and nine Daleks. Judy only has one die left the chances are 50/50 that single roll could lead her to score absolutely zilch in the round (another Tardis or a Human result will lead to disaster) and no result can actually boost what she can score right now. Obviously, Judy is going to end her round and add eight Humans to her score. 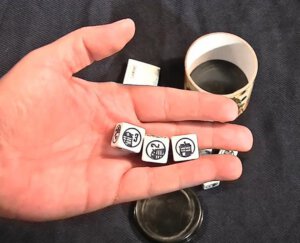 The process of deciding when to end your round or go for broke is certainly where much of the fun with Dalek Dice lays.

I found Dalek Dice to be a fun, quick wind up/wind down game. I’ll mention the game will definitely appeal to Doctor Who fans and casual gamers, especially those who get a kick out of crying out “Exterminate!” when they win a round with a trio of those dice showing. In my experience, the younger kids really had a blast with Dalek Dice while the older (and more serious) gamers liked it but weren’t clamoring for a rematch.

Overall, Dalek Dice is a fine addition to the casual game collection for those who enjoy a fast and fun “push your luck” sort of experience without breaking the bank. I’ll mention this might not appeal to those looking for a meatier experience and there isn’t a ton of theme. Then again, it’s not easy to incorporate a whole lot of thematic feel in a dice game of this sort so you can’t really hold that against Dalek Dice.

A fine, fun, fast playing push your luck dice game aimed at the whole family. This is sure to please Doctor Who fans although the game isn't overly thematic. Then again, it's a dice game so you can't hold that against the title. Might be too basic for those looking for a meatier experience.

User Rating: Be the first one !
Tags
Cubicle 7 Entertainment Dalek Dice Doctor Who