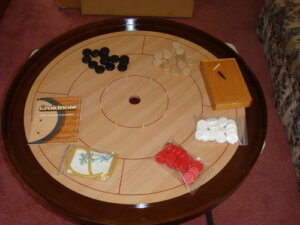 I remember moments in elementary school and junior high when the teachers would come to the end of their lesson—or patience—and we would be free to follow our own interests. As long as we stayed in our seats. You could easily push the edge of this caveat by spinning around to see if your buddy behind you already had a sheet of paper out (not pulled raggedly from a spiral notebook, you hoped) and was folding it carefully into a triangular football. I can’t easily explain why the flicking that ensued was so enthralling, but the rest of the class simply vanished. Until one or the other of us flicked the extra point too hard and hit someone in the head. The teacher’s sudden yell would make you think you’d put out one of Laura Miller’s blue eyes. The football would vanish into the teacher’s desk, and we’d all have to turn our chairs around and keep both feet on the floor.

When you consider the appeal of flicking things (there’s also the grade school tradition of flicking ears, but that’s designed for cruelty, and I really don’t think Laura Miller was hurt by that paper triangle), it’s no wonder that quite a number of flicking games evolved out of folk traditions. A particular flicking game that has a lot of new buzz going for it—amazing, considering that the origins go back to the mid-nineteenth century—is crokinole. The buzz is around the new Mayday Games boards, but I’ll give a brief overview before I return to the new boards (one of which I own—w00t!—not to give away the tone of my review).

Crokinole is a simple game, as you’d expect because of its folk origins. The playing surface is a circle a little over two feet across. Three concentric circles mark the scoring areas—if you have disks left in those rings after a round. At the center of the board is a recessed circle just slightly larger than the disks. That’s the sweet spot. Sink a piece in the hole and you get twenty points. You get fifteen for keeping a piece in the center circle, though that task is made trickier by the eight posts along the line marking that circle. And if your disk straddles a line? Take the lower points. The middle ring is ten points. Outer ring is worth five. And then there’s a little neutral area between the line marking the outer ring and the ditch (for keeping flicked disks from zinging into the Cheetos, and storing zero-scoring disks). That little area? Worth nothing. So make sure your disks don’t drift to the edge. 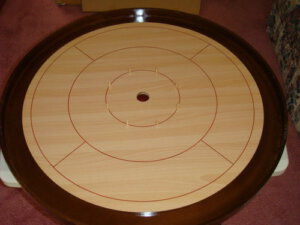 On your turn, you flick. That outer ring is broken into quadrants, and you have to rest your disk on the line of the outer ring and within your quadrant. You can cheat a little bit over the line, but not too much. If the playing area’s clear, you go for the twenty…and you have to have your disk stay in the fifteen circle. Or it comes back out and goes into the ditch. If your opponent has a piece on the board, you have to make contact with it, though you can use combination shots to accomplish this goal. If you don’t make contact with one of your opponent’s pieces, then the piece you shot—and all of your own pieces that you touched—come off into the ditch. That can be a lot of pain. When all the disks have been played, tally the points. Subtract low from high, and give the difference to winner of the round; the opponent scores zero. First person to an agreed-upon total—usually 100—wins.

I’ve got to mention the one-cheek rule: you can’t move your chair during play, and you always have to have one cheek on the seat. Did I mention the folk origins?

The game is simple, delightful fun. Play is quick, and you can easily fall into either a deep silence or a constant stream of chatter back and forth. The boards are eye-catching, and if you have the space to have one set up in a corner for a game day, it’s a great way to keep late-comers occupied until the current longer game(s) come to an end. Of course, if you don’t like dexterity games, stay away.

Back to the buzz. A decent crokinole board has, until recently, required either a woodshop and well-developed skills or a serious outlay of cash to get someone with a woodshop and skills to make one for you. Of course, the boards that people like the Hilinskis andWillard assemble are heirloom quality. Mayday Games, though, has been working on a plan to bring decent, relatively inexpensive crokinole boards to North America. And they have succeeded. I was in the first wave of people to receive one of these boards, and I have been pleased with the product. Are there weird little things with the board? Yes. A couple of little pimples. The lines that mark the rings are painted on top of the finish of the playing surface. The pegs are a little…uneven. And the lacquer of the ditch has some seriously ugly sections. Mostly, these issues are cosmetic, and others can be dealt with by applying a bit of judicious force or a couple coatings of wax. Other purchasers have not been so lucky; there have been issues with shipping as well as the product. Mayday Games, though, have been absolutely stellar in their customer service, and I suspect that their quality control will improve as they take these complaints back to the manufacturer.

Here’s the kicker: the Mayday Games boards cost half or a quarter what the heirloom boards do. A fabulous price for a very fine product. And a lot more fun to flick around with than a paper football.