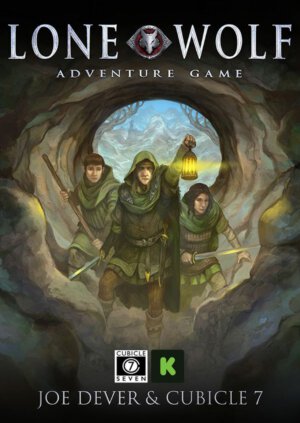 Players: It’s an RPG, so two or more

One of the big Cubicle 7 releases at this year’s Gen Con was the Lone Wolf Adventure Game and the boxed set was certainly doing brisk sales at the C7 booth. Older gamers will no doubt recall author Joe Dever’s “create your own adventure” books which hit bookstores all over the world in the mid-1980s. Now C7 has teamed up with Devers to create a more traditional RPG, aimed at newbies and those wishing to introduce the hobby to family and friends.

I’ll have to point out I wasn’t much into the CYOA craze back in the day; honestly I don’t recall specifically ever picking up any Lone Wolf books but I do remember some rip off books, which never caught my interest after giving them a try. This means I don’t have the same fond memories of flipping from page to page to see how stories turned out as many others do. Don’t take this as a knock on Lone Wolf CYOAs but more to point out I’m looking at this new release from the prospective of someone fairly unfamiliar with the history of the series or the adventure setting. I’ll mention I did download the first of the Lone Wolf books through Project Aon just so I had an idea of how the original adventures worked.

The setting of Lone Wolf is one of fantasy where the forces of good (among them the sun god Kai) are beset upon by those of evil (including the god of darkness Naar) on the planet of Magnamund. Our heroes are Kai Lords, warrior monks who begin their training as children, who are sworn to protect the land of Sommerlund from Naar’s threats. The backstory is a lot less of the cookie cutter variety which has led to the popularity of Lone Wolf over the years.

Here’s a look at what’s inside…

As you might have noticed from my outside the box video, once again Cubicle 7 has put together a really nice package of gaming goodness. Included in the box you’ll find three gaming books, pre-generated characters and handouts, as well as some tokens for generating random numbers; the box top and bottom actually have numbered grids for you to toss the tokens into to generate a number from 0-9. Of course, and it’s pointed out in the rules, you can easily use a ten sided die rather than tossing tokens.

It’s important to understand the Lone Wolf Adventure game heavily skews toward those new to roleplaying. There’s even a learn as you go adventure so gamers can literally get started within a few minutes of cracking open the box. I almost have the impression the designers set out to create a game aimed at parents (who fondly remember their youths spent with noses firmly entrenched in Lone Wolf paperbacks) interested in getting their kids into RPGs with very little muss or fuss. While I have to give kudos to C7 for putting together a game which is easily accessible for younger gamers – or those aforementioned parents – long time gamers might find reading through the rule books to be a bit of a hard slog; basic concepts are very nearly over-explained and could be chore for longtime RPG fans to read. 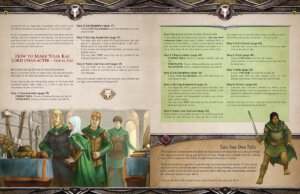 The Book of Kai Training – These 64 pages compose what’s pretty much a players’ guide to the world of Magnamund and includes the basic rules of play as well as character creation. Gamers will learn about the Kai Lords and their way of life as well as their battle against the forces of darkness. Some of the more advanced rules are covered as well.

The Book of Kai Legends – Clocking in at 80 pages this is for the most part the Narrator’s (GM’s)starting point. Two adventures compose a good portion of the book and are designed for you to jump right into once the gamers have determined who the Narrator will be. The book also includes adventure nuggets as well as tips and tricks for the Narrator to help them keep things moving along so everyone’s having fun.

The Book of Kia Wisdom – All the rules are here in one place. This is along the lines of a Narrator’s guide which goes into more detail about the world of Magnamund and how to incorporate the various rules of differing difficulty to tailor the game to your player’s tastes. This is the largest of the three books (96 pages) and those already familiar with the Lone Wolf setting will obviously get a kick out of reading about loads of monsters and foes from the CYOA books. 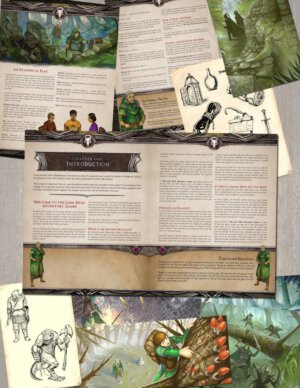 There’s a lot of carryover from the mechanics of playing the Lone Wolf books on into the RPG. Some are cool, such as Kai disciplines from the CYOAs being available in character creation and lot of the flavor of the setting and creatures from the books being covered. Others are kind of strange, like only having eight slots in your backpack for inventory items or tossing tokens into the game box as opposed to rolling a die; One almost has the impression more focus was devoted toward getting a lot of the recognizable Lone Wolf CYOA feel into the proceedings rather than using the tried and true systems which mainly drive The One Ring and Doctor Who RPGs to power the game.

All of this is just fine because you have to take the Lone Wolf Adventure Game at face value and for what it’s meant to be: a primer for those who’d like to check out an RPG based on an immensely popular series of game books. The adventures which are included are actually pretty good and, unlike plenty of other RPGs, the starting characters are already Kai Lords so they aren’t complete pushovers as you might find in other system’s adventures. On the flip side, it isn’t as if the characters will become all powerful scions of destruction after a few hours of play as we’re beginning to see from other game system campaigns.

Your take on the Lone Wolf Adventure Game will surely depend on what you’re looking to get out of the boxed set. If you’re aiming for a complex and highly detailed RPG you’re sure to be disappointed. If you’re interested in a pretty easy and easily understood game system – even when you include the advanced rules – aimed at more casual gamers then you certainly can’t go wrong by picking up what’s essentially a lot of goodness for less than $30. If you just happen to be a fan of the line of Lone Wolf books then you can consider this a must buy.

Your take on the Lone Wolf Adventure Game will surely depend on what you’re looking to get out of the boxed set. If you’re aiming for a complex and highly detailed RPG you’re sure to be disappointed. If you’re interested in a pretty easy and easily understood game system – even when you include the advanced rules – aimed at more casual gamers then you certainly can’t go wrong by picking up what’s essentially a lot of goodness for less than $30. If you just happen to be a fan of the line of Lone Wolf books then you can consider this a must buy.