Nexus Ops is a lighter sort of science fiction wargame initially available from Avalon Hill/Wizards of the Coast back in 2005. From my understanding the title was fairly popular and still can be found on the secondary market with relative ease. Now we turn the calendar to 2012 and Fantasy Flight Games has an all new edition which landed on store shelves early this year. For fans of the original game this is both good and bad. For those who have no experience with Nexus Ops it’s mainly all good though.

I’ll be the first to point out I had not played the AH/WotC edition so the game was completely new to me. I will mention that of the gamers I had join me during the review plays does own a copy of the first edition and had real issues with the FFG presentation. Originally, Nexus Ops was fairly over the top in some of its presentation in regards to oddball artwork and figure design style and color. In this new edition FFG has gone with a more straight forward (and rather gloomy) art style. 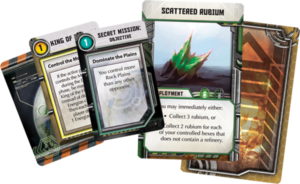 I have no issue with this simply because I’m not familiar with the previous edition. One thing I was made aware of during the play sessions is that FFG has left the core of the game play intact with simply more optional rules that can come into play. This was apparent the moment I opened the box to see that the rule book is twelve pages in total. What that you say, an FFG title with only twelve pages of rules? Yep! The core rules take up eight pages and most are devoted to photos and examples of play. Surely FFG did not take the original game, kit bash it to fit their own model of game design, and release a completely unrecognizable game as they have done on some occasions in the past.

This is a good thing because the game plays great!

Players each represent one four different corporations looking to mine a mysterious resource called Rubium. The corporations do so by exploiting the local alien life forms to do their bidding across the landscape. Each player has a home base from which they send humans, Fungoids, Lava Leapers, and other native creatures across a modular hex map which surrounds a central mysterious Monolith. The goal is to set up new mines in order to finance new, and more powerful, units. Players will also have secret missions they can fulfill to earn extra victory points. 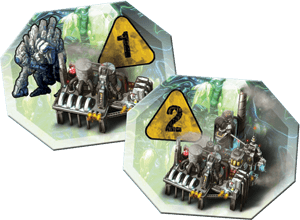 Game set up is fairly easy as you simply shuffle up the terrain tiles face and place them around the central Monolith tile while shuffling the three decks, Energize, Secret Mission, and Battle Victory. Once the tiles are in place you’ll now flip them right side up so the terrain types are revealed. Next exploration tokens are shuffled face down and placed on appropriate One player gets to be the first player and will remain so throughout the game. Players receive their starting amount of Rubium, each player following the first gets an increased amount to offset the disadvantage of activating later in the turn. After this you’re pretty much good to go and for most people ten minutes is about right for getting set up.

Each turn plays out in a sequence of phases as each player will perform all of their actions before the next player begins their turn.

Deployment Phase – Simply enough the active player can use any and all Rubium they possess to purchase new units and place them on any of their three home base tiles. If a player has an Energize card to be played in the Deployment Phase they can do that as well.

Movement Phase – Just like it sounds as the player may move each of his units once. Most only move a hex but some do move further. Units may not move through an enemy controlled or contested tile without stopping.

Exploration Phase – If units have moved into a location that still has a face down exploration token, that token is turned face up. The token may feature a creature, a refinery, or both. If it is a creature then you take that type of creature from your unused supply and place it on that tile. Hey! You’re got a new recruit and you may use that unit as you would any other on the next turn. If you find a refinery you leave the token face up and this becomes a new location in which to mine. If the token shows both you simply perform both actions.

Battle Phase – The active player now conducts combat in all contested hexes he has units present. Units attack in order of their power so more powerful units attack first, followed by the next, then the next, and so on. Both attacker and defender roll simultaneously for each type of unit and a hit is scored if the attack number or higher is rolled on a six sided die. The owning player removes a unit of his choice for every hit and returns it to his supply.

Some Energize cards can be played during Battles as well as various units have special abilities that can be activated.

Once all the unit types have fought if no defending units remain the attacker has won the battle and receives a Battle Victory card while the defender draws a card from the Energize deck. If all units mutually eliminate each other it is still considered a victory for the attacker. If attacking and defending units still remain then it’s neither a win nor a loss and the battle is over for this turn but may (and most likely will) continue later in another player’s turn.

If the battle meets the conditions of one a player’s Secret Mission card they now play the card and receive the victory points.

Mining Phase – The player collects the number of Rubium tokens from the mines he controls and has a miner unit occupying. Not all units may mine so this is something to consider when you’re battling it out over a refinery location. This Rubium is added to the supply to purchase new units in the next Deployment Phase.

Both Energize and Secret Mission cards can be exchanged for one Rubuim each and are placed in the discard piles.

Then it’s on to the next player. 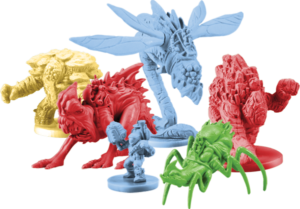 The game ends once either a player has reached twelve victory points or one player has been eliminated. A player is eliminated if they A) have no units on the board and B) don’t have enough Rubium to purchase more units on their turn even following and card exchange for Rubium. If the game ends after a player elimination then the player with the most victory points wins. There are various tie breakers in place as well so very rarely will the game end in a draw upon player elimination.

I have to say I really enjoyed Nexus-Ops and highly recommend anyone who doesn’t already have a copy of the original to race out and pick up this game. Sure, there’s a bit of that Risk atmosphere to it but there’s quite a bit more depth to be had than in any game of Risk. I’d say it falls between Risk and Axis and Allies on the scale of complexity.

I especially like the fact the game plays quickly enough and the battles just down bog down into tons of units slogging away until only one side remains. This has a tremendous effect of speeding up downtime as there will be lots of battles yet they only last one round. Especially interesting is when you have more than two players contesting an important piece of real estate as one player can move into the hex hot and heavy to smash one opponent only to find they’ve been whittled away leaving in the first battle only to be easy pickings for the forces of the unengaged opponent.

A clever player, in a three or four player game, can find themselves in a great position to carve up the soft underbelly, all around the map, if two or more players find themselves in a meat grinder situation over a hex or two. Controlling the Monolith can be a great asset but, in my opinion, not at the cost of continually battling over it when units can be better served mining that sweet, sweet Rubium!

Obviously the game will come across as way too light for those more in the mood for a longer or more epic game along the lines of a Twilight Imperium, but for those gamers who want a multiplayer bash up that doesn’t boil down into a never ending stalemate (with one man left standing) slog in a game like Risk or Ikusa the ninety minute playtime of Nexus Ops is very welcome. I don’t have a beef with the FFG decision to go with a different art style simply because A), I’m not intimately familiar with the previous edition and B), I don’t overly concern myself with the look of a game because if it plays great, it plays great! If I can give high marks to the ugliest game I can remember ever seeing (Baltimore & Ohio) I certainly can’t knock FFG for the dingier or grittier look of Nexus Ops.

If you already own the previous AH/WotC edition I don’t know if there’s really enough here to warrant a new purchase as not much has changed outside of some additional optional rules and the visual style of the game. However, if you don’t already have Nexus Ops and you enjoy multiplayer games with a bit of an epic feel you will surly want to add the new FFG edition to your collection!