Today is your last day on the job. Corporate decided to close the store and everybody is getting the boot. You could spend the rest of the day helping those miserable, wretched wastes of human skin who come in and demand service, or you could do what you always wanted – tell them were to go and have a good time. And you know which one it’s going to be….

Five Fingered Severance is a kind of “What Would you Do?” type game. It is everyone’s last day on the job at a crappy convenience store. Just picture yourself as Dante or Randal (more Randal than Dante) from Clerks and the boss just told you today is your last day because the store is closing.

Got the premise? Now, your job is to push your boss as far as you can by stealing, insulting customers, and goofing off until you get fired in the end. You amass points by performing those actions, but you also get heat. Once your heat hits the 30 point mark you are fired and it is over for you. You just have to hope that you gathered enough points to beat everyone else.

The board is the floor plan of the store, and has nine different areas that you can hang out in. There are six different 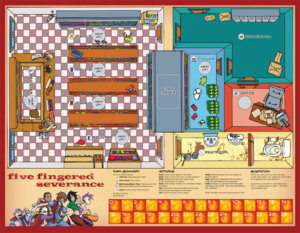 characters you can choose from, and each has their own special little ability to give them a slight advantage. There is also a standup for the boss, who is the bane of your existence. He will move around the store either as the result of drawing a card, or another player tattling on you and sending the boss your way. If he catches you slacking off or with stolen goods in your possession you will gain some heat and get that much closer to getting fired.

There is a stack of smaller cards called Work Markers that drive most of the game play. This deck will contain several types of cards, most of which have icons that indicate which space they go into on the board:

Work – Some cards give you actual work tasks that need to be performed. Like cleaning the restroom, restocking the smokes, sorting the magazines, etc. You don’t want to do any actual work, but it can decrease your heat so sometimes you will have too. You don’t want to get fired too early.

Slack – Some of the cards have things you can do to goof off. You can play videogames, talk on your cell phone, have a fire extingu

isher fight, and lots more. Once you begin a goof off task no one else can do it and you earn slack tokens worth one point each. The longer you slack off, the more tokens you earn, but if the boss catches you the goofing off is over and your heat goes up.

Customers – Yes the store does have some customers. It is your choice whether you want to help them out or insult them. If you help them out your heat will generally go down by two, but if you insult them you earn points but take some heat. So, do you tell the stoner to shove it? Or point him to the Twinkies? Some of the customers have special rules too; the foreigner, for example, can’t speak English very well so you have to roll a die to see if you actually helped him out or insulted him.

Events – Crap happens that you can’t avoid. The event cards will move the boss around, maybe to you! Some event cards increase everyone’s heat, and some even tell you to draw six new cards and place them on the board. This makes the end game come even faster; because once the Work Marker deck is gone the game is over.

Finally, the “Final Slack” cards, of which there are seven, will get you six points if you can complete them, but you are automatically fired when you finish it. “Breaking into the ATM” and “Steal the Boss’s Computer” are examples of final slacking off tasks. An important note: The rules state that these cards say the word “Final” on them, but they don’t. The backgrounds are red, and that’s the only way to tell that they are the final slack cards (plus they are all worth six points each).

A deck of plot cards are used to give the players options for screwing each other over. Each player starts with five plot cards, and they are only replenished if you use one of your two actions per turn to draw back up to five cards.

The artwork is nice and whimsical with a manga like appearance. The components are of standard fare, no real “Wow” factors. Some of the spaces on the board have stacks of round tokens placed on them that represent the items that you can attempt to steal. You won’t know what they are until you draw the token and flip it over (why the heck did I steal antifreeze?).

Each turn you will flip over a Work Marker and place it on the board or execute the event. Then you get two actions. You

can move to any space in the store, steal an item, stash stolen items in your locker in the storeroom, draw back up to five plot cards, call the boss over to your space, move the boss from your space to another space, help a customer, or insult a customer. Once you do two of those actions, and play any plot cards you wish, your turn is over.

Play continues until either the Work Marker deck is empty, or you are down to only one player left. Players count up their points and the player with the most points wins.

Most of the time you’ll be trying to earn point while screwing over the other players, and they are doing the same to you. It is all very light-hearted and funny so the players aren’t getting po’ed. Usually, they will send the boss over to your space at the exact moment that you are watching a movie in the boss’s office with a stash of porno mags and candy bars in your pockets. You will have to make a suspicion roll and if you fail you’ll lose your stolen stuff and gain some heat. Once you get to your locker in the storeroom and stash your loot, it is safe and those points are locked in.

Usually, you can pick when you want to get fired when you get near the end of the deck and head off to perform a final task. Sometimes though, the other players can get you fired by bumping up your heat to 30 and it is all over for you. Luckily, the game is usually over within the next ten minutes and you can still win if you have the most points gathered before you got canned.

This game was fun. The teenagers REALLY liked it and were gung-ho to play again. We got some good laughs out of the game and usually finished in about an hour. The rules aren’t the best, but didn’t lead to any real problems. Several of the customer cards have special rules, and I would prefer them to be on the actual card rather than having to look it up in the rulebook. Also, the number 1 on the stolen items look somewhat like the number 7, which we learned after finishing the first game. So a couple of players had a lot fewer points than they thought they did. I also wish they had included a few baggies to hold all the different tokens. They are a pain to separate during setup as they all rattle free in the bottom of the box. Also, action summary cards for each player would help. They are printed on the board, but this doesn’t help the players on the back side of the board.