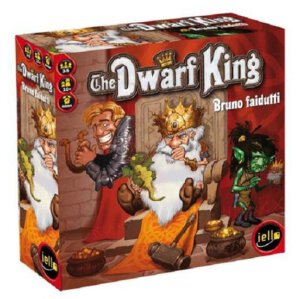 Publisher: IELLO Games, and others

The Dwarf King is based on Barbu, a french traditional card game, but is even more cranky. There are dozens of different goals, and a few special cards with zany effects. As a result, Dwarf King is a trick taking game in which every round feels like a new and different game, or like the same game with a new twist.

I’ll admit it. I’m not an expert at card games, and Dwarf King is most definitely a card game. Yes, Gamer type card games I’m great at, but I haven’t played a lot of Hearts, or Spades, or games of that type.

Dwarf King takes these generic types of card games and adds some theme and some fun and some changing strategy. It moves the standard trick taking card game from what I consider boring to a game that can be fun.

As indicated by the title, the Dwarf King has a fantasy theme. The cards are high quality and glossy with whimsical 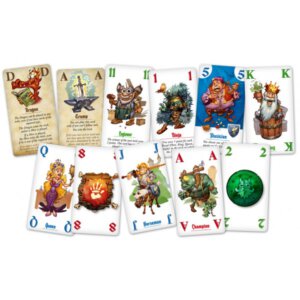 artwork. There are 39 standard cards running in three suits: Dwarves, Knights, and Goblins. There are also 14 special cards that will either provide a way to pull out a crucial win on a particular trick, or give you some bonus points at the end of the round. Only one special card is used per round, so it keeps the replayability factor up.

Along with the cards comes a set of 20 quest tiles. They are thick and glossy and should easily stand up to repeated play. Each of the quest tiles list two scoring options for the round on them. The player lucky enough to be dealt the 5 of Knights chooses the scoring tile randomly and selects which option on the tile will be the scoring rule for that round.

The box is nice too. It is compact but sturdy, with compartments for the cards and tiles. The cards overflow a bit, but the top of the box has a magnetic flap which holds everything in well.

To play, you randomly pick one of the special cards, show it to all the players, and then shuffle it into the deck with all of the other cards. You’ll pull out one of the cards in a three player game to make sure that everyone will get the same number of cards dealt to them. Randomly select someone for the first deal, and in all subsequent deals the dealer will be the player who ends up taking the 5 of Dwarves in a trick during the round.

Deal out all the cards to the players. The player who gets the 5 of Knights must reveal it, and then draws a random scoring tile and picks the scoring rule that applies for that round. A game lasts seven rounds, and you can keep track of this simply by the number of scoring tiles you have used so far.

The player who was dealt the 5 of Goblins gets to lead with the first trick. Here is where I initially had problems. You see I wasn’t all that familiar with trick taking games as I mentioned earlier. The rules assume that you know all about it and if you don’t you’ll end up playing the game completely wrong. Which I did. For me, the rules are insufficient and vague, and need some work.

To play a trick, the lead player selects a card and plays it on the table. The other players then each play one card from their hands in turn (clockwise). Their card must match the suit of the card played if they have one. If they don’t then they can play any card they wish. The player who plays the highest value card of the suit that was played first wins the trick and takes those cards and places them in their scoring pile. There is no trump suit, which means only the suit that led off the trick can actually win that trick. The player who won the trick leads off the next one.

Play continues for the round until the players all run out of cards. At that point you go through your scoring piles and compare them to the rule on the quest tile to assign points to each player. The player who ended up with the five of dwarves is the new dealer and a new round is begun. After seven rounds the player with the most points wins the game. 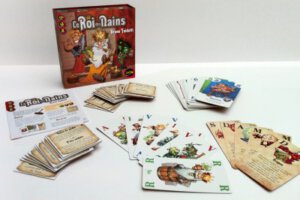 As you can see, it is very simple. The scoring and special cards is what makes this game stand out from your run of the mill trick taking card games. You don’t earn points for taking tricks, you earn points based upon the rule on the quest (scoring) tile. A tile might read “+3 points for each king, -3 points for each queen” and so you would need to use a completely different strategy than if you had the tile that reads “Score as many points as the number of cards in your suit with the fewest cards”. In the first case, you are trying to win the tricks that have the kings, while losing the tricks that have the queens. In the second, you are trying to end up with as many cards of all three suits that you can so that you score the most points for the suit with the fewest cards.

The strategy changes completely from round to round and it is fun. One tile has you score one point for each trick that the player to your left takes. So you have to figure out how to get that player to win more tricks so that you get more points, while the player to your right is trying to get you to win. It was pretty interesting.

The special cards also add some little twists to a round, and a lot of times they can make the difference between scoring nothing in a round, and scoring a few crucial points. One of the cards is the all powerful trump card, which will let you win the trick it is played in, regardless of the other cards played. Remember though, only one special card is used per round, so you’ll only see it once during a game.

Once I understood how to play the game I had a great time. It was much more strategic than I thought it would be, but it isn’t like playing Bridge or something complicated like that. It was fun and had a lot of luck too, but the challenge is for the players to be able to think on their feet. The scoring rules change, so you have to adapt.

The Dwarf King is a fun game, especially for your non-gamer friends who are used to playing only your standard card games. I’d call it a gateway card game. The games are also fairly short, so you can use it as a filler too. I wish it had some way to track the score other than pen and paper, to keep it more in theme. I grabbed the coin tokens from Red Dragon Inn and used those to keep score, and those fit in nicely thematically. The theme is basically pasted on, but they did what they could within the context of a card game.