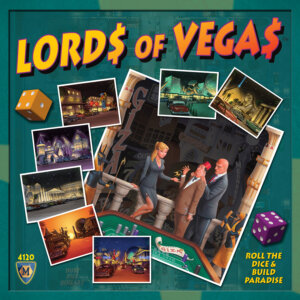 Las Vegas. The Strip. To the untrained eye, it’s a sleepy desert crossroads. A wasteland of cheap hotels, gas stations, and dust. But to you, it is Paradise.

Your brilliant plan? You will construct a magnificent chain of casinos and fill them with light. You will manufacture the ultimate dream of easy money and impossible luxury. You will sell-basically-nothing. You are not alone in this plan. In Lords of Vegas, you and your friends play rival developers, building on the Las Vegas Strip. You can get ahead by building the glitziest, most glamorous, and most popular casinos. But you can fall behind by letting your enemy become your boss.

Lords of Vegas is a clever strategy game with all the thrills, risks, and rewards of the casino business. You start out with empty lots, build small casinos, and expand them as your bankroll grows. Your rivals can build next door, and they just might take you over with a clever paint job or a lucky roll of the dice.

Buy, sell, trade, and gamble your way to the top as you build your empire along the storied Strip. So come on, roll the dice, and build your piece of Paradise!

Yes, I like to gamble.  I hit the boat at least once a year, I’ll buy the occasional lottery ticket, and I’ve been to Vegas a few times.  Nothing too extreme, but it is a lot of fun. When I finally got the opportunity to play Lords of Vegas, I doubted the ability of the designers to capture that feeling that you can only get when sitting down at a casino on the strip in Vegas.  Boy was I wrong. 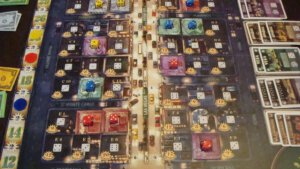 This is a game about developing strategies, taking risks, and making a wager or two when you really need it.  It’s a game about building and taking over casinos on the strip in Las Vegas.  Something that many have dreamed about, but few have accomplished.  The game captures the high rolling, take a chance feel you can get only in Vegas, and even though there is a huge luck factor when playing this game, you don’t consider it any worse than the odds of pulling out a 10 when you are ahead in the count.

The game board is indeed snazzy, and represents several blocks of empty lots along the Vegas Strip.  You will take over these lots and purchase and build casinos on them throughout the game.  The edge of the board has the victory point track.  If you manage to reach 90 victory points, you automatically win, although as far as I know this has never been done.  All of the components are quite nice, although I would have preferred poker chips to the paper money they provided.  The paper money does have Dino, Fank, and Elvis on it, which is a pretty nice touch.  The player marker chips are transparent, which makes them a little difficult to see on the busy board, especially the yellow ones.

There are 48 dice included, 12 in each player color, and the way they are used in the game (aside from rolling) is to represent the power in each casino.  If a player has the highest value die in a casino, they are the boss of that casino and will earn the victory points when their color comes up in the cards.

In addition to the dice, there are 45 square cardboard tiles in each of 5 colors.  These represent the casinos that can be built.  Each tile has a hole in the center where a die can be placed.  Each empty lot on the board has starting die values on them, that also help determine how much an empty lot will cost you to build a casino on it. 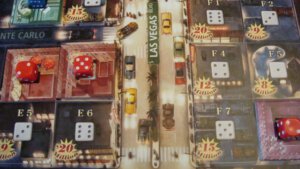 Finally, the cards are the engine of the game.  They determine who gets paid and when, plus when the “End Game” card is drawn, the game is over.  This card is placed 3 quarters of the way down the deck at the beginning of the game.  There are only 9 cards of each casino color.  After a card is drawn, it is placed in its own specific discard pile by color.  This is to enable the players to see the likelihood that a specific color card will be drawn.  If 7 silver cards have been discarded, but only 5 purple cards have been discards, then it is more likely that the next card will be a purple one than a silver one and you can plan your strategy accordingly.  See, already you are calculating the odds in this game, the split discard pile was an excellent idea.

Let me show you how it all works together.  It is Yellow’s turn, so the yellow player draws a card from the deck.  It is a purple card with the number “A2” written on it.  Yellow takes one of their yellow marker chips and places it on the lot marked A2 on the game board.  Yellow now owns this lot, and can build a casino on it whenever he wants on his turn.

The bank then looks at the board and pays $1 to every player for each marker they have on the board. So Red gets $3, Blue gets $2, and Yellow gets $3.

One note, a casino consists of every connected tile of the same color.  So you can have a 1 tile casino, all the way up to a 9 tile casino, as long as the tiles are next to each other.

Now yellow can do their actions for the turn. Yellow decides to build a casino on the A2 space that their marker is on.  The lot on the board says that it will cost yellow $6 to build a casino there.  Red already has a Brown casino on both A1 and A5, which is next to Yellow’s A2 lot.  These each have a red die in them showing a value of 3 pips.  Yellow pays the $6 and placed a purple tile down in the A2 spot.  The board says the initial die value of spot A2 is 2.  So yellow puts a yellow die in that spot with 2 pips showing on top.

There are now 3 brown casino tiles together, 2 of them are red’s and 1 is yellow’s, but since yellow has a 5 showing and red only has 3’s, yellow is the boss of the casino and will earn the victory points the next time a brown card is drawn.

Finally, yellow decides to gamble at red’s purple casino.  It has 2 tiles so Yellow can gamble up to $10, which he does.  Red lays off half the bet to the bank, as she is getting nervous now.  Yellow rolls 2 dice and gets a 4.  Looking at the payoff card, a 4 means yellow wins!  Red gives $5 to yellow and the bank gives yellow another $5.

Yellow is done and passes the player card over to red.  Now red can try to exact some revenge.

The rules are simple once you know them, despite the fact that they are difficult to describe.  The most difficult part of this game is the math.  Every time you draw a card you have to figure out who gets paid what in both points and money.  This isn’t too bad, until you draw one of the 4 “Pay the Strip” cards, when every casino connected to the strip earns money and points.  I was also afraid that I would run out of money in the bank while playing, as you really don’t get a lot of paper money. It has come close, but the bank has never actually run out of cash.  There are other player actions available too, like trading with other players and Sprawling, which is taking over an un-owned lot next to your casino.

Whoever has the most victory points on the track when the “End Game” card is drawn is the winner.  If there is a tie, the player with the most money wins.

I found this game is fun, exciting, and packed with Vegas theme.  Although there is a lot of luck, there is a lot of strategy too, just like in Las Vegas (at least, I like to think so).  The teenagers said it was ok, but the adults that I played with loved it, especially those that have been to Vegas.  One more thing I’d like to mention, I introduced this game to one of my non-gaming friends.  He picked up on the rules in just a few minutes, although it took longer before he started to see the different strategies available to him.  He had a good time and asked to play again, which is a good sign.  Maybe now I can introduce him to other games.

How you feel about Las Vegas on a whole will have a lot to do with what you think of Lords of Vegas. I found it to be an exciting mix of strategy and luck as you aim to grow your Vegas empire. 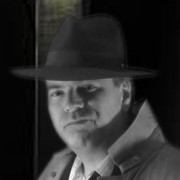