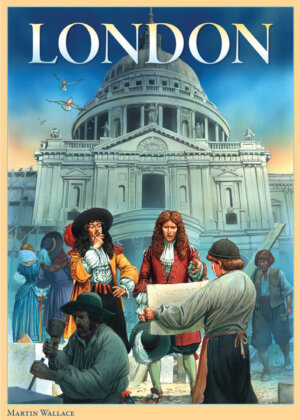 London lies devastated after the Great Fire of 1666. This is your opportunity to build a new city on the ashes of the old. It is up to you how you employ the talents of the people of London to this end. Will you favour the business classes, who will earn you money? Or would you prefer to spend more money than you can rightly afford on grand monuments and sumptuous palaces? You must also deal with the problem of rising poverty and how to employ the many paupers of the city. Throughout the game you will be forced to make tough decisions. To achieve one aim you must sacrifice another, which may open an opportunity for a competitor.

Almost 250 years of the city’s history is recreated in this game. Many of the most famous buildings and monuments are captured in detail on illustrated cards. These elements are presented in a relatively simple game that can be played easily within ninety minutes.

When talking about a Martin Wallace game you can be talking about nearly any kind of game. His approach to game design spans all over the place from super long fiddly economic desert like euro games, to the train games he’s so well known for and even to Runebound which seems to come out of left field.

With London Wallace brings us a card. Yeah it’s in a board game box and has a board that a few of your bits get played to but the driving aspect of this game is the deck cards. Thematically players are building the city after the devastating fire of 1666. The cards are staged so at the start of the game you sort them into the A’s, B’s and C’s, shuffle each pile and combine them into one large draw deck. Each player is given a hand cards 5 pounds and 5 poverty cubes. These poverty cubes are nasty but we’ll talk about those more in a bit.

The game is really one of the easier designs by Wallace as on a player’s turn you go through a 3 step process.

3. Discard cards down to 9 in hand

So obviously the game is step two so let’s talk about those options. If you choose play cards you are building your city or playing the few actions cards that are in the deck. The building cards come in three colors; Brown, Pink and Blue. Some of the cards have building costs others are free to build but the trick of it is when you play say a brown card you have to discard another brown card. In addition you are not just discarding these cards to a discard pile you are discarding them to the display. The cards placed on the display are then available for the next player to draw during their step 1 draw phase or step 2 draw 3 cards action. This means you need to particularly careful about what you discard as to not give your opponents something they are really needing.

Once you have cards played in front of you that you like you can run your city and get the benefit of these cards. Each card gives a different benefit and some are so good they have a cost in either pounds or making you discard a card to activate them. Again if you have to discard it goes to the display making it available to others to grab up. The benefits do outweigh the costs and you want to run you city in order to effectively advance your position in the game. You generally are gaining money, victory points or even shedding off those nasty poverty cubes with your buildings as you run your city. The problem with these cards is most of them flip face down after you run them and you have to use your next couple turns reacquiring cards and playing them back to your tableau so you can go through the process again. Now that your city has run and cards have been flipped you get the joy of collecting your poverty. You gain 1 poverty for every “pile” of card in your tableau.  This means the more cards you build the more poverty you are going to gain. In addition you gain 1 poverty for every card left in you hand. The only relief is you get to subtract from this number 1 poverty for every borough you have bought in the London.

Now let’s talk about buying land. If you choose this as your action you pay the for the borough you want to purchase. Upon purchase of any borough you draw a number of cards depending on which one you chose, and place one of your player markers on the board indicating that you own that borough. Boroughs are also worth varying VPs as the end of the game so there’s no reason to not buy one unless you are just out of money. Loans are available and from my experience it seems that a single loan is almost necessary. You may take a loan at any time in the game but can only pay them back at the end of the game. You get 10 pounds per loan and repay them at 15 pounds each. If you don’t have the money at the end of the game you lose 7 VPs so it’s quite important to get those loans covered.

As you final action option you can draw 3 cards. This is in addition to the 1 card you drew in step 1 so you are in fact increasing your hand size by 4 cards.

That’s the whole of the game and it continues until the deck runs out at which time players add of their scores and finds a winner. This is where we get to discuss poverty cubes. At this point the player with the fewest cubes will discard all of their and each other player will discard the same amount of cubes. Then you lose VPs based on the poverty chart which is friendly at first losing only 1 VP for 1 or 2 cubes ratcheting all the way up to -15 VPs for 10 cubes and each thereafter is an additional -3.

There’s not a lot of heavy decisions to be made in this one but there is a lot of tension in the discarding of cards. These cards to fill up on the discard dispaly and eventually flush out to the discard pile so you have decisions about which of the 2 levels to put your discards so they go away quicker.

Other than a handful of cards there’s not a lot of player interaction in London so if that’s something you need in your gaming experiences it’s a strong consideration. For me the I like the build the engine, run it, tear it down, rinse/repeat aspect of this game. It’s pretty different from other games as you can build your engine to be a huge economic machine this turn but next time focus on poverty shedding instead. Seeing a card pop up on the display that would suit your plans but knowing you have to wait for it to get through to your turn is frustrating and tension building. As you take VPs they are then hidden so keeping track of who is in the lead is not easy and again builds to the anxiety of who is going to win the game.

The game as I said above is one of the simpler designs by Wallace and plays pretty quickly. Seasoned players will get this done in 60-90 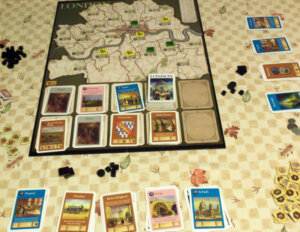 minutes. New players who have to take the time to really read the cards will be a bit slower probably adding 30 minutes to the game length. I feel this game really does have a 1 game learning curve as players need to understand the phasing of the cards from A’s to B’s to C’s and see the impact that the poverty has.

When all is said and done I really enjoy this game. It’s on the lighter side and it can be played quickly. Plenty of decisions to be made even if a lot of the time it’s about how you are building your city and therefore it’s more about where to discard a card more than which to discard. It’s a mid-weight game that feels good to play when you are not looking to have a real brain burner.  I like the artwork on this board much more than many other titles by Treefrog games as it seems to suit the game nicely. The backs of the cards are a nice rendition of the cover art. The faces of the cards are various drawings and paintings of the appropriate building or city improvement which adds enough flare for this game. The coins used for money in this game is the standard unimpressive small silver and large gold plastic coins that come in all Treefrog games. If there’s one component I would replace in a heartbeat it would be the coins. Other than those however I was very pleased with the rest of the production and look of the game seems quite improved from previous releases.

If you enjoy an intuitive card game of economics that focuses on hand management a minor bit of area majority and a heavy doses of card drafting this is going to be a game for you to seriously consider. It’s brought hours of enjoyment to me and my gaming circle thus far with no end in sight.

“London is a splendid place to live in for those who can get out of it. “