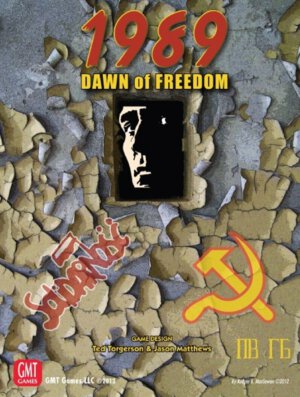 1989: Dawn of Freedom takes players into the momentous events that led to the overthrow of Soviet control throughout Eastern Europe. The core game system is directly modeled after Twilight Struggle (TS) so if you’re familiar with that excellent game, you’ll be able to step right into 1989 and start playing with just a little study of the rules. One player will represent the Communist powers while the other portrays the fledgling democracies looking to topple the communist regimes. Rather than present the game in comparison to TS (and I’ll get into that a bit later) let’s look at the game as it stands on its own.

As always, GMT has put together excellent components and they include two counter sheets with deluxe style counters, a 22″ x 34″ mounted map, 110 strategy cards, 52 Power Struggle cards, two player aids, and a 32 page rulebook. The rulebook is especially well presented and includes a breakdown of each of the historical strategy cards and a description of the event portrayed by the card. There’s even a seven page walkthrough of a full first turn of 1989 to make things as clear as possible. 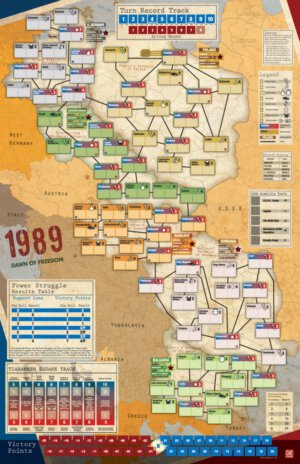 The game map depicts Eastern Europe and each of these countries have various cities (or areas) displayed as boxes across the map. Each area shows its stability number as well as if that area is considered a battleground. The stability number represents the amount of support that must be present above and beyond your opponent’s in order to control that area. These areas are connected by solid black lines to indicate if areas are adjacent or not. Each city is also shows a Socio-Economic icon abstractly representing segments of that city’s population. These icons can be Elite, Bureaucrat, Farmer, Worker, Intellectual, Student, Church, or Minority.

Each game will run ten turns which are further broken down into seven action rounds. To begin a turn each player will be dealt eight strategy cards from the Strategy deck. There are three separate decks (Early Year, Mid Year, and Late Year) that will eventually enter play as turns progress. During an action round each player will play one of their Strategy cards as either the event portrayed on the card or the number of Operation Points indicated on the card. Each card displaying an event will show if it is a Communist event, Democrat event, or playable by either player. If playing a card indicating your opponent’s event you may use the operations points but the event will take place. Operation points may be used to place additional Support Points in an area to increase your support or to perform a Support Check in order to reduce the amount of Support your opponent’s has in an area.

Every turn each player may play a card into the Tiananmen Square track in order to gain bonuses over their opponent until that other player can match the bonus box. This allows each player to effectively burn an opponent’s event without playing it once per turn if the card has a high enough OP value.

Some Events take place only one time and are discarded from play once they take place or could even remain in play throughout the game. Some Strategy cards are scoring cards and they must be played during the turn they are dealt but during what action round is completely up to the player. When a Scoring Card is played a Power Struggle takes place in the country displayed on the card.

To begin the power struggle the Power Struggle deck is shuffled and each player receives six cards for the first area they control in the country and two additional cards for each additional area under control. Some events in play can affect the number of Power Struggle cards a player can receive. The Power Struggle cards are broken into three types, suited cards, leader cards, and wild cards. Suited cards fall into Petitions, Marches, Strikes, and Rallies in the Square. The side who played the scoring card has the initiative and plays the first card, then the other side must match the suit or lose the struggle. If he matches, he can then make a die roll to steal the initiative. The cards in each suit are broken down further by rank, with varying strengths from 1-3. The strength of a card influences the counterattack roll. There are leader cards which can match any suit but can only be used if you control a space in the country of the type displayed on the card (farmer, worker, etc…). There are also a few wild cards that provide a few extra twists and layers of strategy.

Once the power struggle comes to an end the loser rolls a die to determine how much Support must be removed from that country and the winner rolls a die to determine how many Victory Points they receive. If the winner is the Democrat and the die roll is high enough, they can actually topple the regime and the Communist player loses that country. Effectively that country is no longer in play for the rest of the game. If the Communist player wins the Power Struggle they place a marker on that country to indicate bonus points that will be received if they win further struggles there. 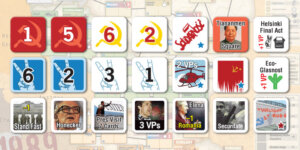 The game come to an immediate end once either player reaches a score of 20 VPs or the New Year’s Eve Party event is played by the Communist player. If the game lasts the full ten turns then each country is scored for victory points and the Communist player receives a bonus for countries they control.

All in all, 1989: Dawn of Freedom is an excellent game! Although many of the core mechanics are that of Twilight Struggle, 1989 plays quite a bit differently as the Power Struggle replaces the automatic scoring from TS. This can lead to very interesting results against all odds and controlling more areas in a country is never a guarantee of winning the Power Struggle. Also, unlike TS, in 1989 the Communist can lose control of a country and that’s it; the country is no longer in play for scoring so there’s no reason to devote any more Ops or Events to it. The Tiananmen Square track plays differently than the Space Race in TS as the Democrat player has an easier go on the track early and the Communist finds progressing easier the further they move along. I also found the bonuses the track provides to be much more important, in game terms, than the Space Race usually is in a game of Twilight Struggle.

I also find 1989 plays a lot faster than Twilight Struggle due to the facts there are no Headline Phases, no Def Con, no required military actions, and countries can be removed from scoring due to the Power Struggles. This means even your first few games should finish in around two and a half hours and, once you have the rules down, later games should clock in around two hours.

Since I’ve only played the game a few times I can’t really give you a breakdown of what the most effective strategies may be for each side but I can tell you taking on the side of the Communists is certainly more of a challenge than the Democrats – at least in my playthroughs. This should lead more experienced players to allow newer players (or someone being taught the game) to take the reins of the Democrats. This isn’t to say the Democrat player has a cake walk but they don’t face the same frantic scramble as the Communist.

As much as I enjoy 1989: Dawn of Freedom I don’t see the title becoming the Twilight Struggle “killer” as some playtesters had led me to believe. This is by no means a knock on the game – as the final score will indicate the quality of the release – but I think a few items will hold 1989 from taking the crown. First, the subject matter itself probably won’t appeal as strongly as Twilight Struggle. In TS you have the U.S. and Soviets vying for ideological control of the entire world over a 45 year span; 1989 is simply the struggle for control in Eastern Europe between fledgling democracies during a single year.

The Power Struggle mechanic might turn some off because you can invest a lot of OPS and Events into a particular country, control more areas within the country, and still lose the Power Struggle due to a bad card draws. I didn’t have an issue with the mechanic since it led to more tension and drama but I can see some players not liking the randomness involved.

Finally, one of the knocks I’ve heard over the years about Twilight Struggle is it’s too one sided against the U.S. – especially early in the game – thus GMT released some additional optional cards. Personally, I’ve always felt the deck is stacked against the Soviets late, making them a bit tougher prospect to play but, regardless, I’ve never lost as the U.S. without the optional cards. Granted, I almost always have to play as the Soviets so my experience playing the U.S. amounts to three games but I can see where people would think the odds are against the Americans.

In 1989, the Communist player is behind the eight ball from the get go and the pressure is relentless. I find that a real challenge but other players might not like the idea the Communists can never truly “win”. Winning a game as the Communists means you simply didn’t lose as much power in the region as opposed to the historical reality. That may not sit too well with some gamers.

In the end though, 1989: Dawn of Freedom is a fantastic game regardless of why I don’t believe it’ll knock Twilight Struggle off its top perch. The game keeps both players on their toes throughout and provides a challenge for each side. If you love TS, you’re going to love 1989! If you haven’t given TS a try and may have been scared off by its three hour game time or thought it may be a bit too complex (which it isn’t) 1989 is a great jumping on point for GMT’s brand of card driven games. 1989 is certainly going to get a lot of play on my table top and Elliott is even demanding I bring the game with to Origins so he can whip my butt in a new title!

Any gamer worth their stripe can do no wrong adding 1989: Dawn of Freedom to their collection! ‘Nuff said.